by rev
$2 billion development by Beulah International has been lodged over in Melbourne now with the government.
Design by UNStudio and COX.

The taller of the two towers, an apartment skyscraper, will rise to an eye-watering 356.2 metres under the proposal, making it the tallest tower in the Southern Hemisphere, dwarfing nearby Australia 108 at 312 metres.

The shorter of the towers will comprise flexible commercial offices featuring both indoor and outdoor green terraces.

The shorter tower will also feature a five-star urban resort topped with a “world-class rooftop culinary experience”, with views of the Melbourne skyline. by rev
This was a 6 month international search for a design. Here's the other designs for the site. by Nort
Normally I'm very dubious of renders that have such prominent greenery, but given the prominence of this site it's not unreasonable to expect the final result might actually do it justice.

by TheCrown1
I hope this becomes a real destination in terms of public space, retail and other spaces. This is the last chance for a major development in southbank imo (excluding the next Crown development).
Southgate is good and all but it isn't iconic.

by cmet
In the Fin today 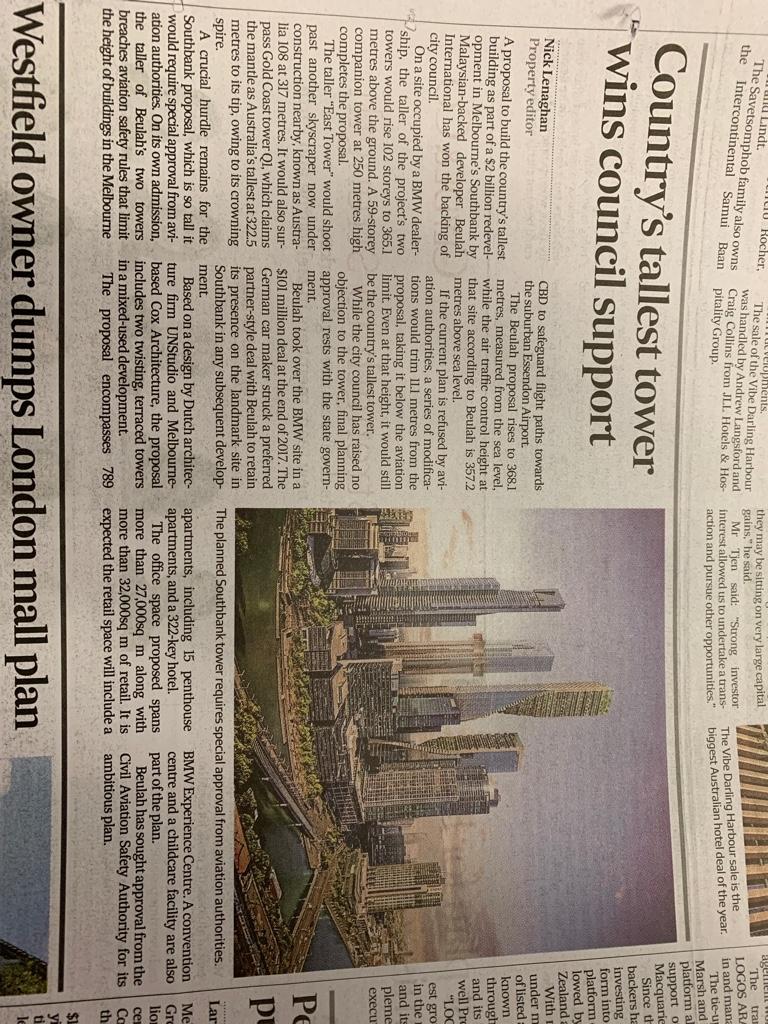 A proposal to build the country’s tallest building as part of a $2 billion redevelopment in Melbourne’s Southbank by Malaysian-backed developer Beulah International has won the backing of city council.

On a site occupied by the BMW dealership, the taller of the project’s two towers would rise through 102 storeys to 365.1 metres above the ground. A 59-storey companion tower at 250 metres high completes the proposal.

The taller “East Tower” would shoot past another skyscraper now under construction nearby, known as Australia 108 at 317 metres. It would also surpass a Gold Coast tower, the Q1, which claims the mantle as Australia’s tallest at 322.5m to its tip, owing to its crowning spire.

A crucial hurdle remains for the Southbank proposal which is so tall it would require special approval from aviation authorities. On its own admission, the taller of Beulah’s two towers breaches aviation safety rules which limit the height of buildings in the Melbourne CBD to safeguard flight paths towards the suburban Essendon Airport.

The Beulah proposal rises to 368.1 metres, measured from the sea level, while the air traffic control height at that site according to Beulah is 357.2 metres from sea level.

If the current plan is refused by aviation authorities, a series of modifications would trim 11.1 metres from the proposal, taking it below the aviation limit. Even at that height, it would be the country’s tallest tower.

While the city council has raised no objection to the tower, final planning approval rests with the state government.

Beulah took over the BMW site in a $101 million deal at the end of 2017. The German car maker struck a preferred partner-style deal with Beulah to retain its presence on the landmark site in Southbank in any subsequent development.

Based on a design by Dutch architecture firm UNStudio and Melbourne-based Cox Architecture, the proposal includes two twisting, terraced towers in a mixed-used development.

The proposal encompasses 789 apartments including 15 apartments and a 322-key hotel.

The office space proposed spans more than 27,000 square metres along with more than 32,000 square metres of retail. It is expected the retail space will include a BMW Experience Centre. A convention centre and a childcare facility are also part of the plan.

Beulah has sought approval from the Civil Aviation Safety Authority, CASA, for its ambitious plan.

by [Shuz]
This also got approved by the State Government. But I'm not sure if that also means it got approved by CASA.
All times are UTC+09:30
Page 1 of 1
Powered by phpBB® Forum Software © phpBB Limited
https://www.phpbb.com/