It looks cheap and dated and it's not even finished building.
Keep Adelaide Weird
Top

I like the look viewed from SouthTerrace. Has almost an Asian temple feel.
Top

A few more from this morning. Looks like they've installed another level of that louvred ventilation filter since EBG's photo. The northern wall looks pretty disappointing at this stage. They should have found a way to use that grey cladding on the edges.

Not a huge fan of those two levels that sort of "transition" between the podium and the tower proper either. They look a bit out of place in my opinion. 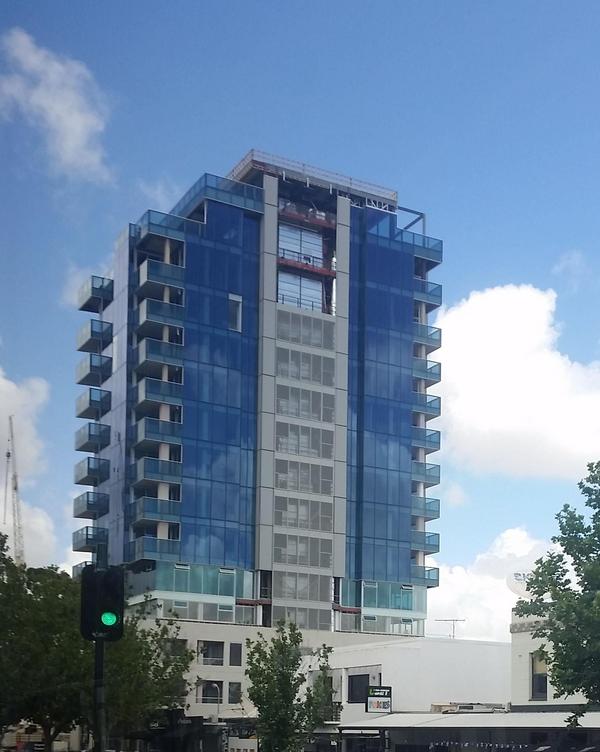 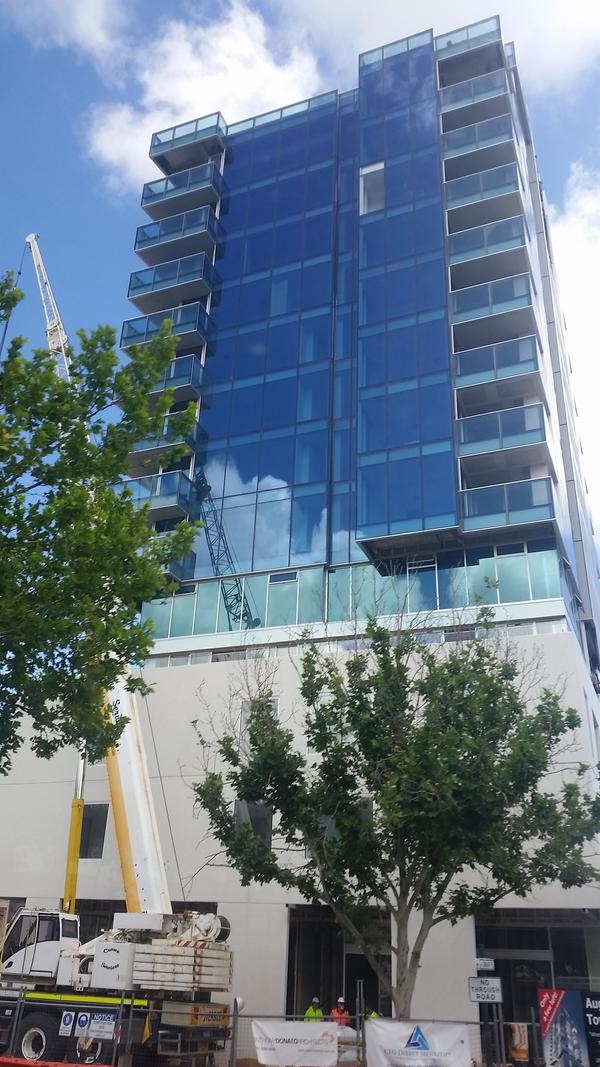 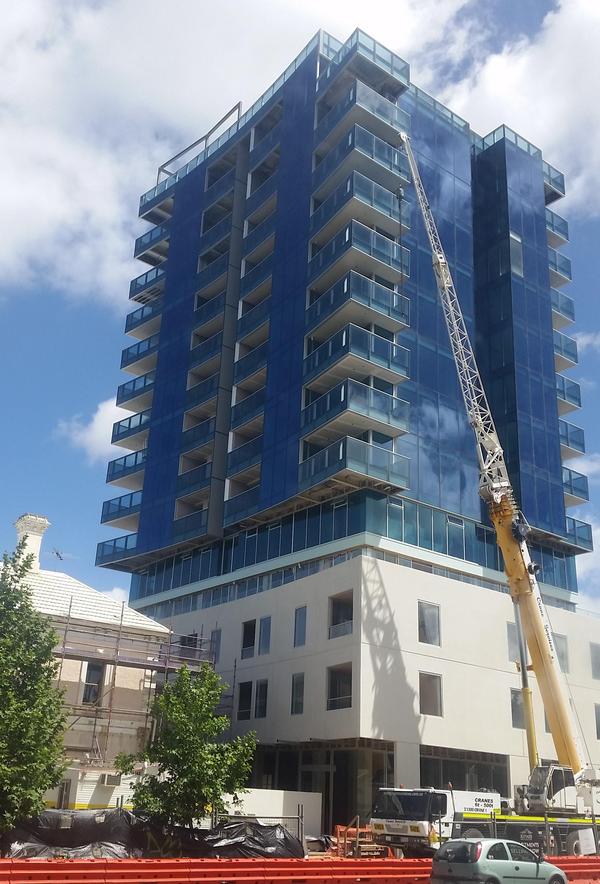 I've noticed that one window on the northern wall and one on the eastern wall look different. I'm fairly sure that there is glass in those spots, but if so, why are those panels colourless rather than blue?
Top

Also from last week. They've removed the old white tiled roofing of the house and replaced it with steel sheeting. 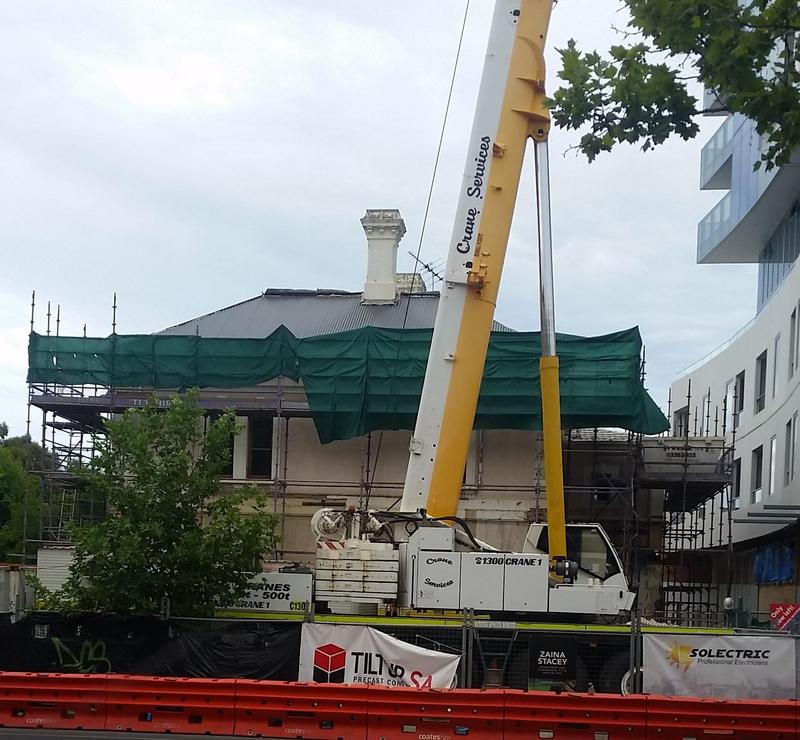 The tower proper seems to be taking its time. Most of the fencing around the bottom has been removed but it doesn't quite look done at the top.
Top

THE lawyer for a developer of a $35 million luxury city apartment building says his client will defend allegations it owes $177,000 to one of South Australia’s leading building supply companies.

Bianco Construction Supplies is suing developer Build 29 in the District Court alleging the company, which is building the 14-storey August Towers on the corner of South Tce and Hutt St, ignored demands to pay $156,714 lodged between June and August last year.

In its statement of claim, filed last November, the company is also seeking $15,671 in legal and debt collection costs, and $5487 in interest from Build 29.

According to the claim a copy of which The Advertiser obtained through the Courts Administration Authority, Bianco issued a debt collection notice on October 13 last year to Build 29, whose director is Sam Sgherza.

In its claim Bianco Construction Supplies said Build 29 entered into an agreement “to pay for goods and services within the time frame stipulated by the plaintiff’s invoices.”

Bianco Construction Supplies was granted a default judgment for the money in January 18.

But lawyer Matthew Thompson, of Stewart-Rattray Lawyers acting for Build 29, said Bianco Construction Supplies had agreed to set aside the judgement, which he said was issued on a misunderstanding, and that his client will defend the claim.

He would not elaborate on the nature of the defence in the matter which is listed for a hearing tomorrow.

Daniel Schirripa, of Build 29, said that investors have started settling on properties and he hoped of the building would be finished by next month.

“It’s all definitely happening, it’s coming together,” he said of the project which has been under construction since late 2015.

That would explain the obvious halt to construction here. The top section has sat idle for nearly three months.
Walking on over....

A COMPANY behind a $35 million city apartment tower completed the project without having a builders’ licence but has blamed the oversight on an administrative error.

Build 29, which this week completed construction of the 14-storey August Towers apartments on the corner of Hutt St and South Tce, surrendered its licence on October 10, according to licence details held by Consumer and Business Services.

It is illegal to undertake residential or commercial construction without a building licence with owners potentially unable to make an insurance claim for any defects.

Daniel Sghirripa, of Build 29, told The Advertiser that the information had come to the company’s attention on Tuesday after notification from CBS.

“We are now rectifying the situation as a matter of urgency as the licence was surrendered by mistake as a result of an internal administration error,” he said in an email.

The Advertiser raised the matter with the CBS and Build 29 in the past week after the director of a major Adelaide building firm alerted the paper to the breach.

Build 29 is part of the Sgherza Group, whose director is Sam Sgerzha.

A spokesman for CBS said the agency had not received any complaints regarding August Towers.

“Where Consumer and Business Services receives complaints relating to a build those matters are reviewed and investigated as appropriate,” he said.

But The Advertiser has sought further clarification from CBS and Build 29 as to the potential implications to investors from the absence of the building licence, in particular on the company’s builder’s indemnity insurance.

The building licence breach comes after The Advertiser revealed that Build 29 is defending allegations in the District Court that it owes $177,800 to Bianco Construction Supplies.

So what happens now?
Top

A PROMINENT property developer is facing 46 criminal charges including allegations he withdrew $146,800 from a bank account just weeks before declaring himself bankrupt.

Salvatore “Sam” Sgherza, 55, is also accused of intending to defraud creditors of $128,000, taking out nearly $40,000 in bank loans knowing he would not be able to repay the money and making false statements while bankrupt, according to a charge sheet filed in the Adelaide Magistrates Court.

The charges, some which carry penalties of up to five years’ jail, have been brought by the Commonwealth DPP following an investigation by the Australian Financial Services Authority into alleged breaches by Mr Sgherza of the Bankruptcy Act.

Mr Sgherza, developer of projects including West Lakes’ Infinity Waters, Crown Marina at North Haven and August Towers in the city, declared himself bankrupt on August 30, 2012.

The West Lakes resident was discharged from the bankruptcy three years later.

The DPP filed the charges against Mr Sgherzha on June 24, 2016 with the matter listed for court argument today.

He faces a maximum five years’ jail if convicted of the charges.

Mr Sgherza has also been charged with taking out loans ranging from $500 to $2000 with American Express, National Australia Bank and GE Capital Finance between July 21, 2012 and August 8, 2012 “without having at the time of contracting any reasonable or probable ground or expectation … of being able to pay the debt”.

He is also accused of signing a declaration in August 30, 2012, accompanying his bankruptcy petition, knowing it to be “false” as he had not disclosed the “full amount of moneys owed to a secured creditor and failed to disclose all of his unsecured creditors”.

He is also charged with failing to “fully and truly disclose” to the trustee of his estate information relating to the proceeds of the sale of three motor vehicles in his possession.

Lawyer Andrew Moffa, acting for Mr Sgherza, said he had not received instructions to comment to the media.

The Advertiser revealed last week that Build 29, part of the Sgherza Group, completed the August Towers development on Hutt St without holding a builders’ licence.

The company had blamed the oversight on an administration error.

I wonder if there have been any safety inspections or anything at all during this construction project, surely they would require a builders' licence?
Top

Wow, no builders licence = no insurance...

Sounds like a fraud case won't be the only reason this development will hit the courts...
Walking on over....

Due diligence by the buyers would have shown the developer is an ex bankrupt. On the other hand, the building license issue is a real blindside. Crap position to be in for the buyers but not unavoidable.
Top
Post Reply
246 posts