AndyWelsh wrote: ↑
Tue May 26, 2020 3:27 pm
Some photos from the weekend of the paving and landscaping outside Lot Fourteen on North Terrace.

Thank goodness we've grown out of the mid-century attitude of "just tear it down and build something new" when it comes to anything heritage or architecturally significant. They're beautiful buildings and the landscaping makes them look stunning!

Agreed, however, I hope like they've done with the octagonal building at the front that they paint the yellow out of the bigger buildings to have that same white/black look, keep the contrast.
Top

Update from today as huge sections of new paving are now complete. 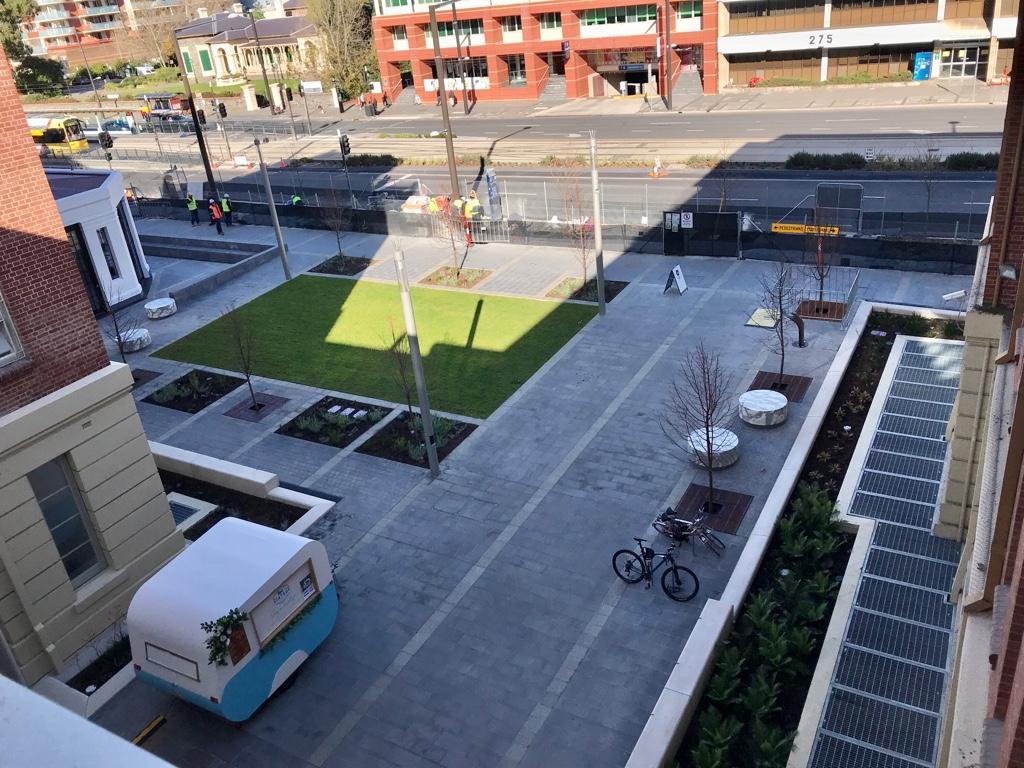 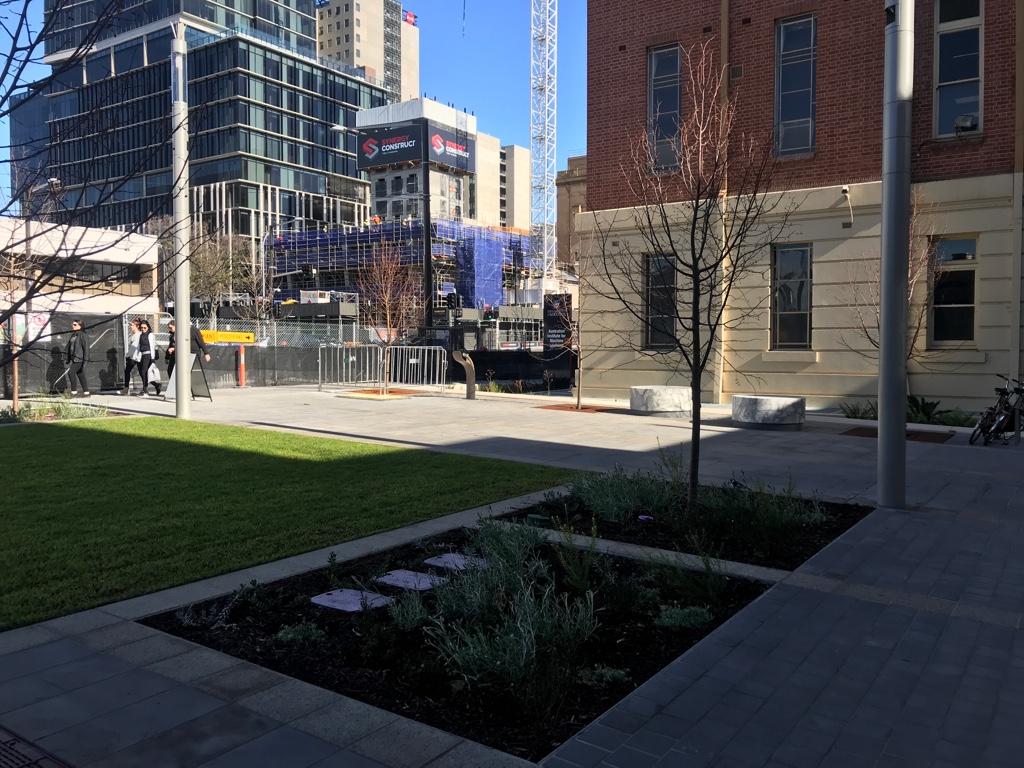 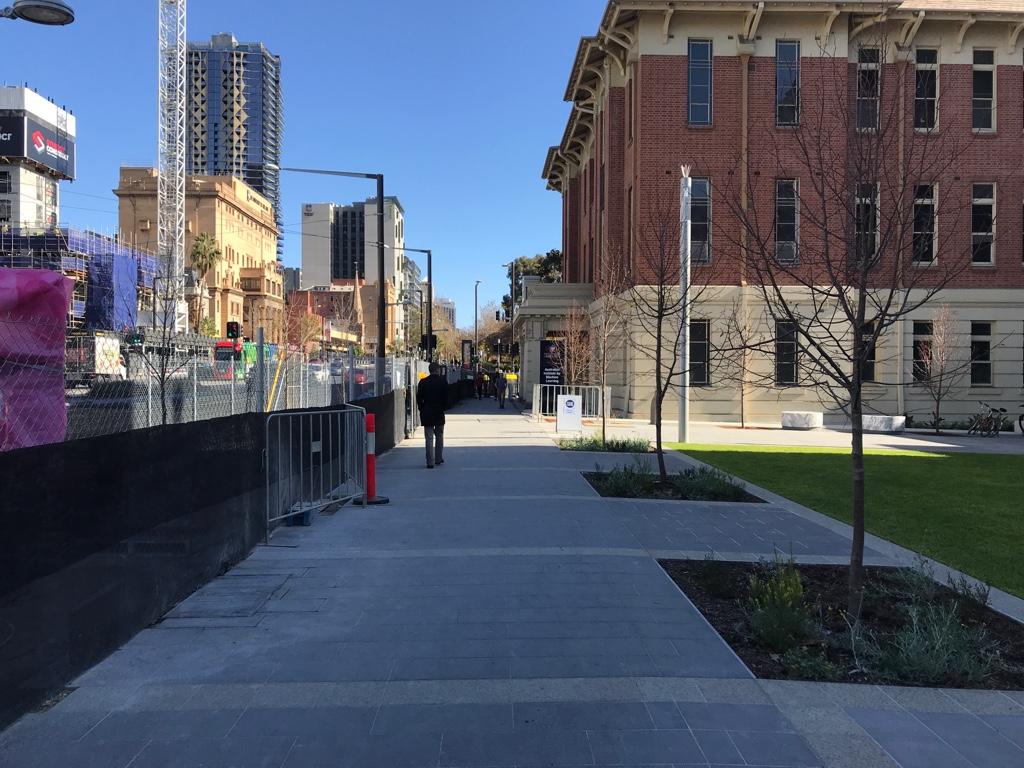 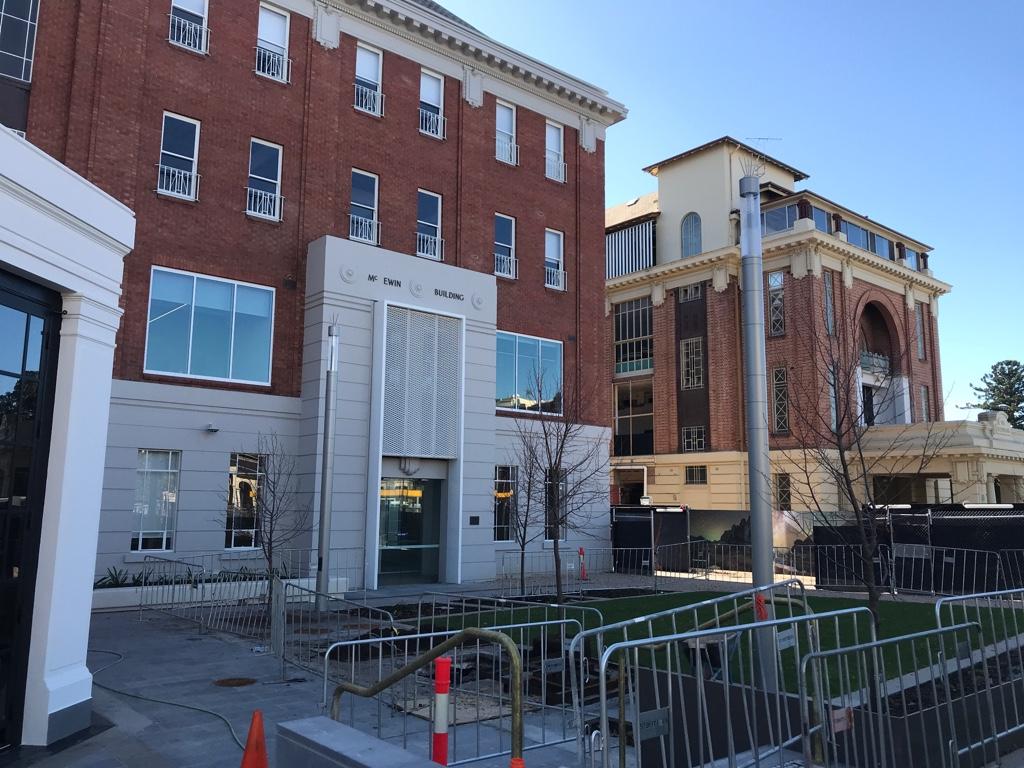 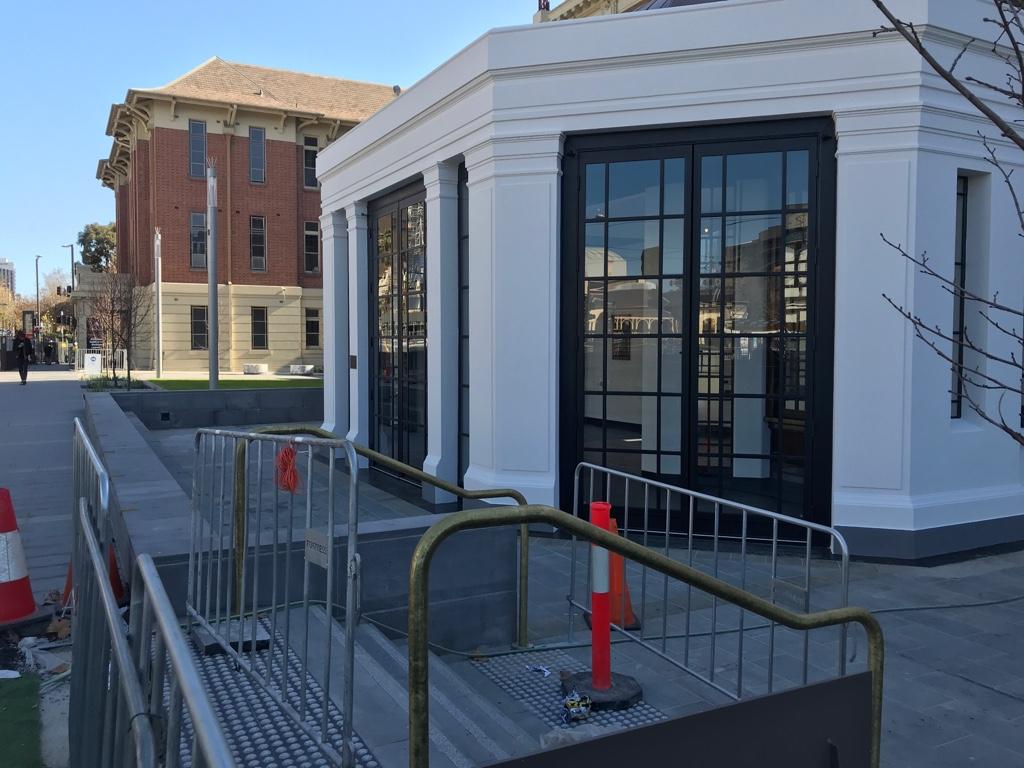 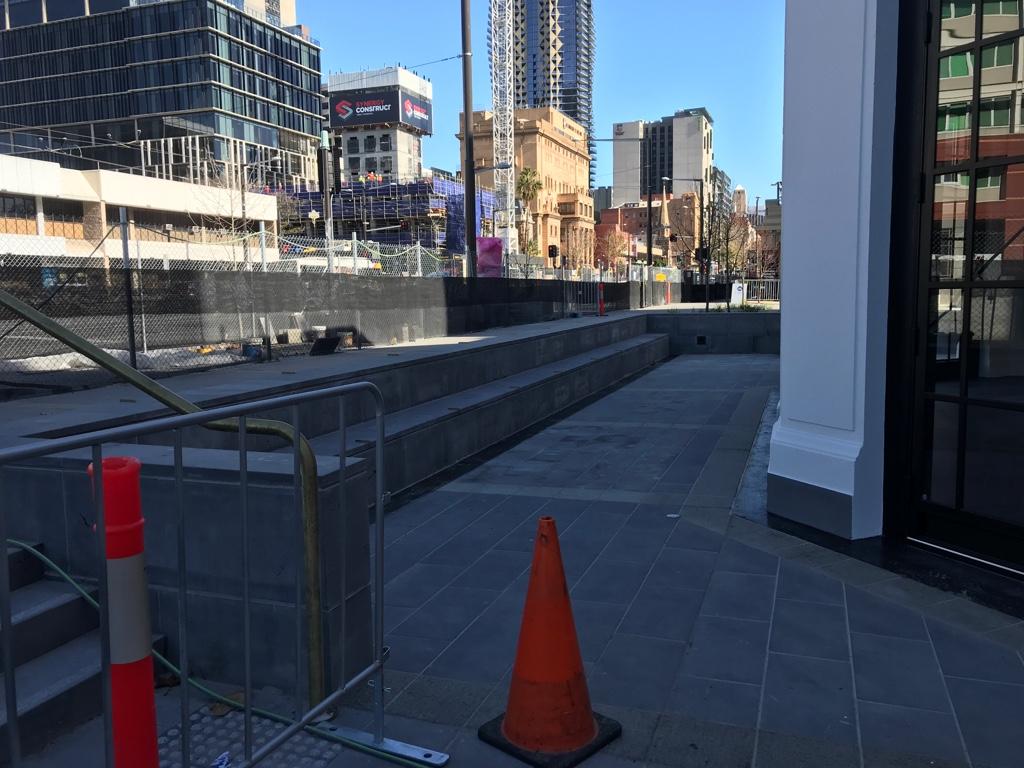 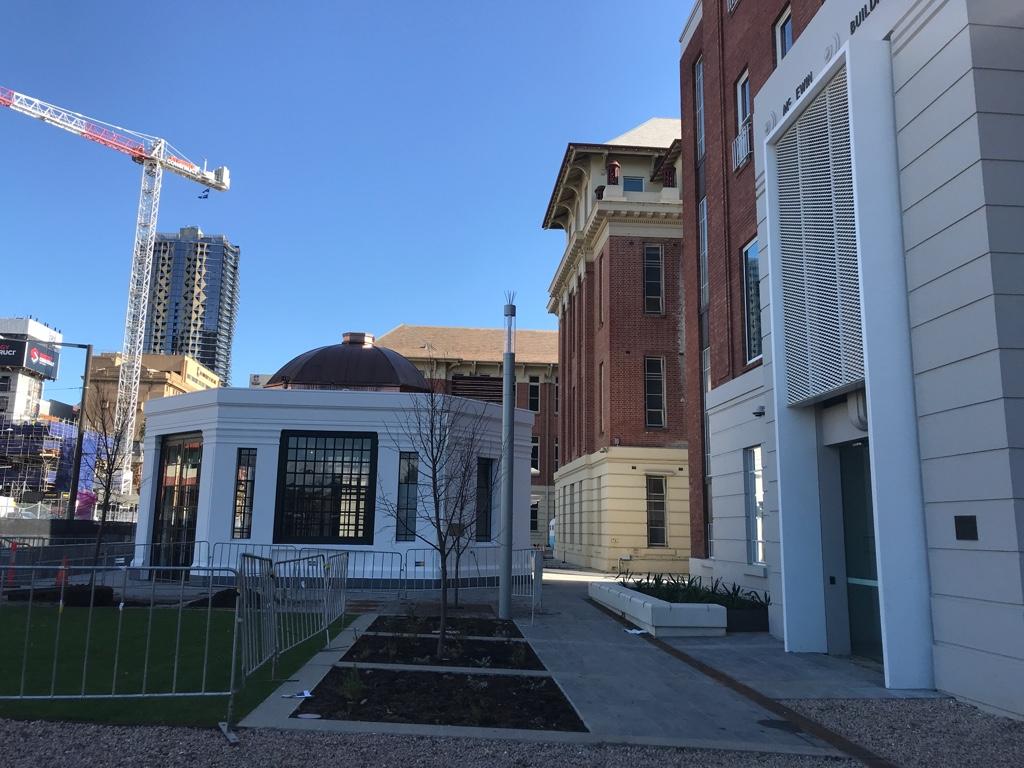 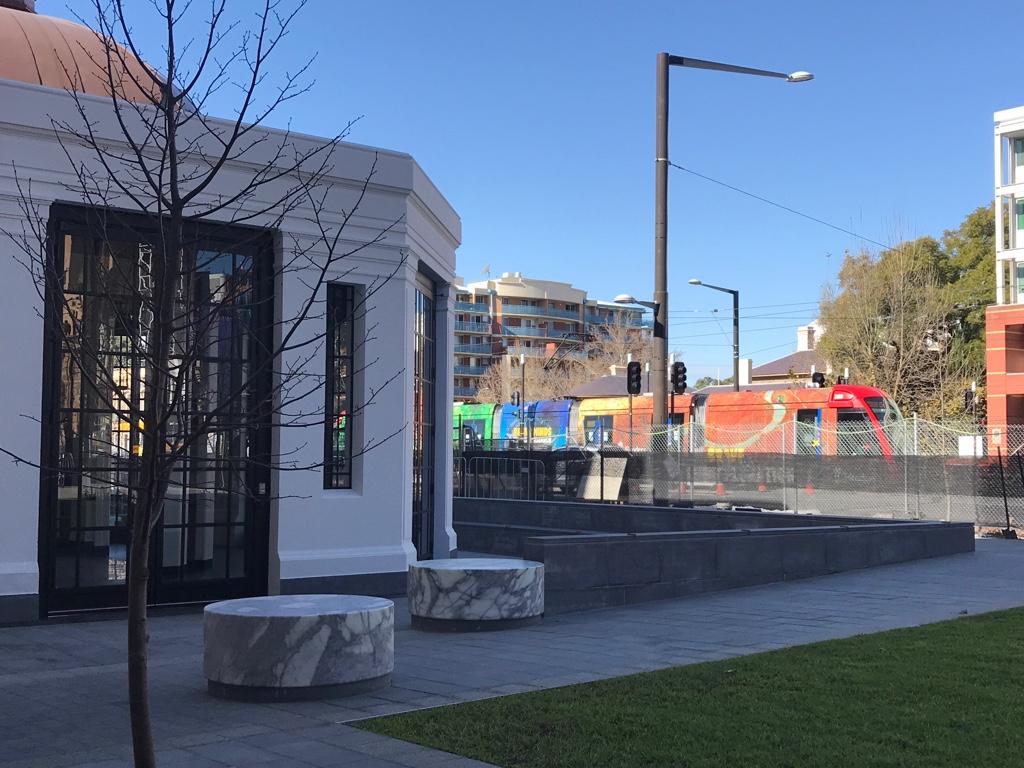 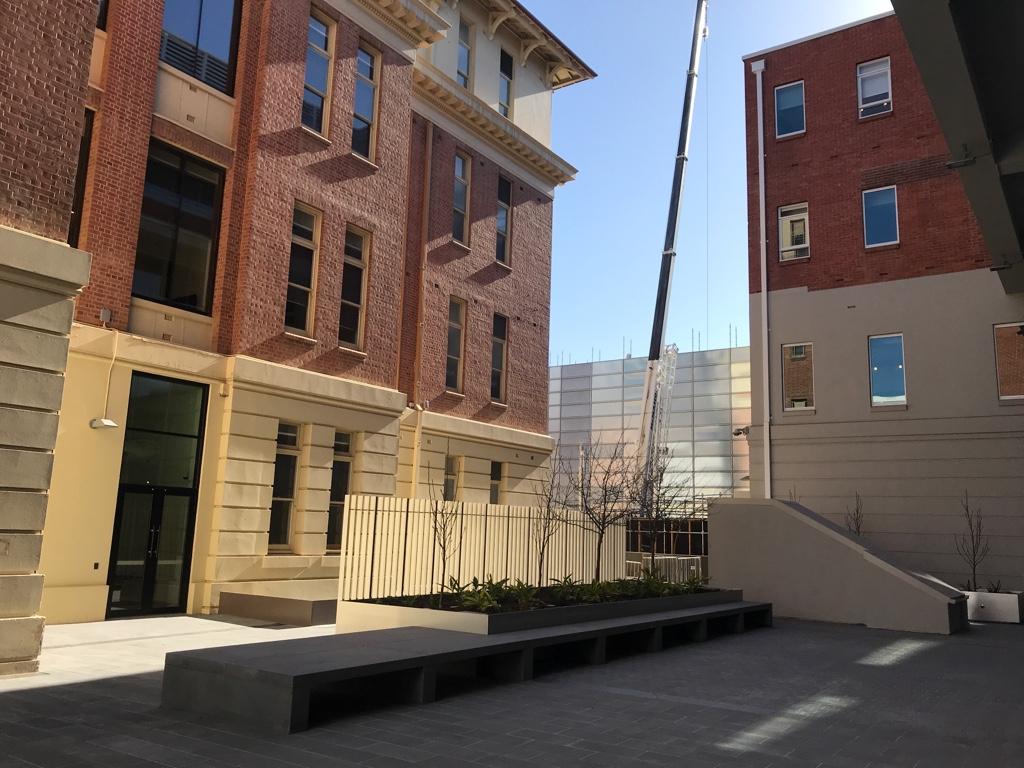 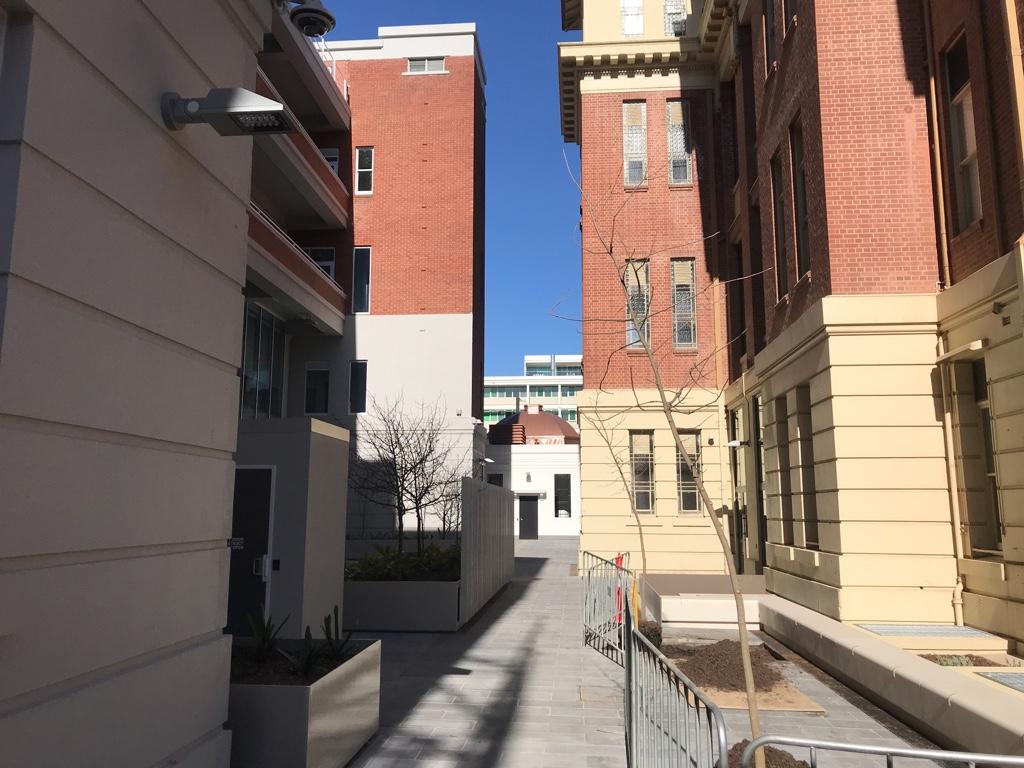 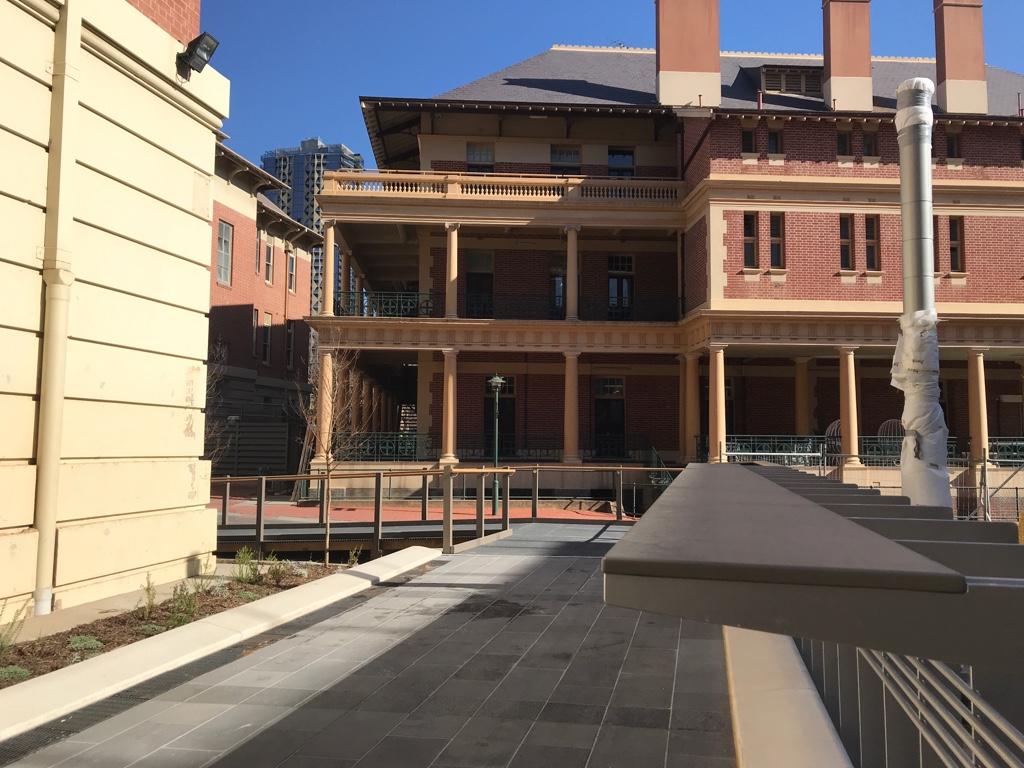 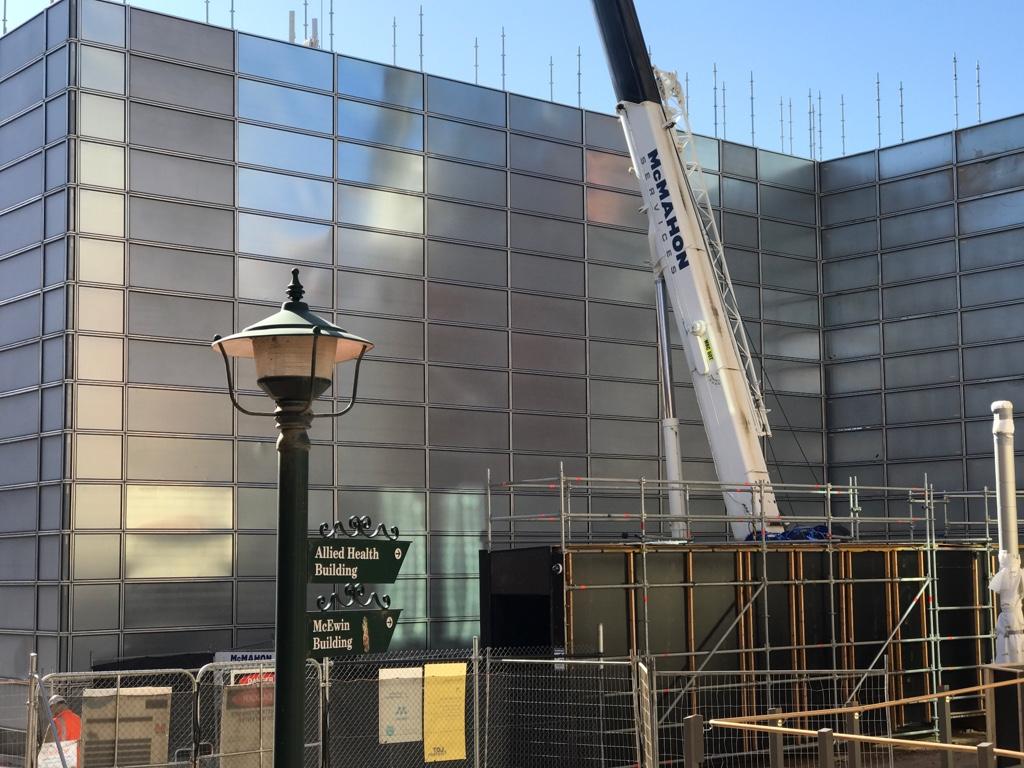 New glass seating area on back of Allied Health building: 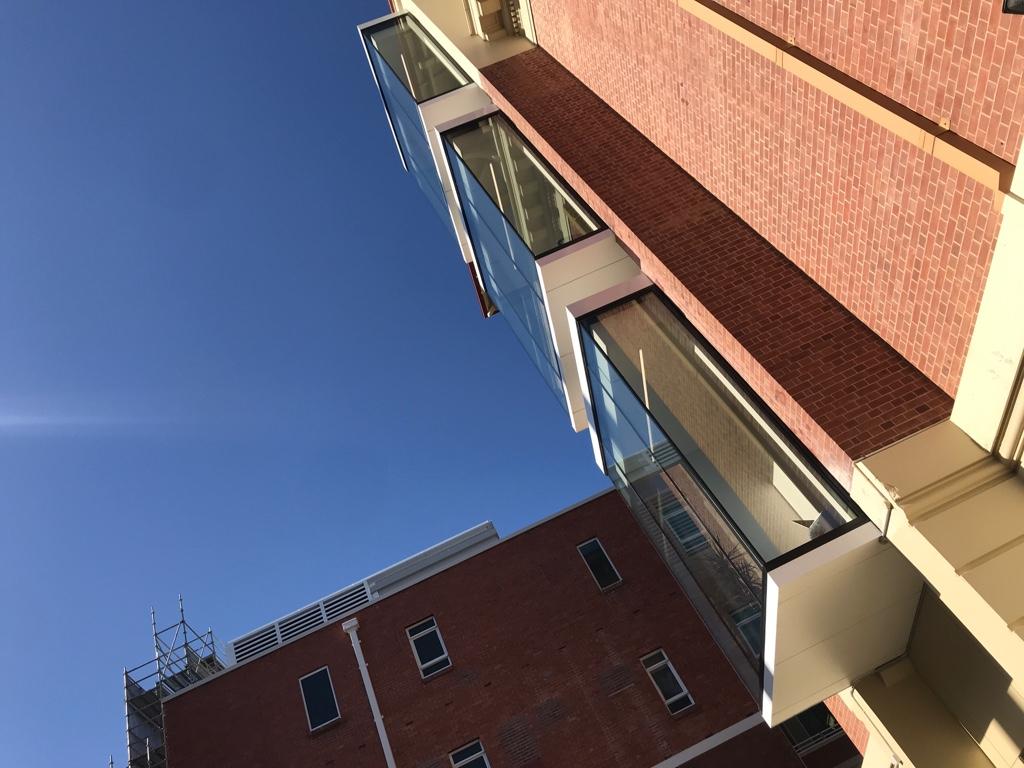 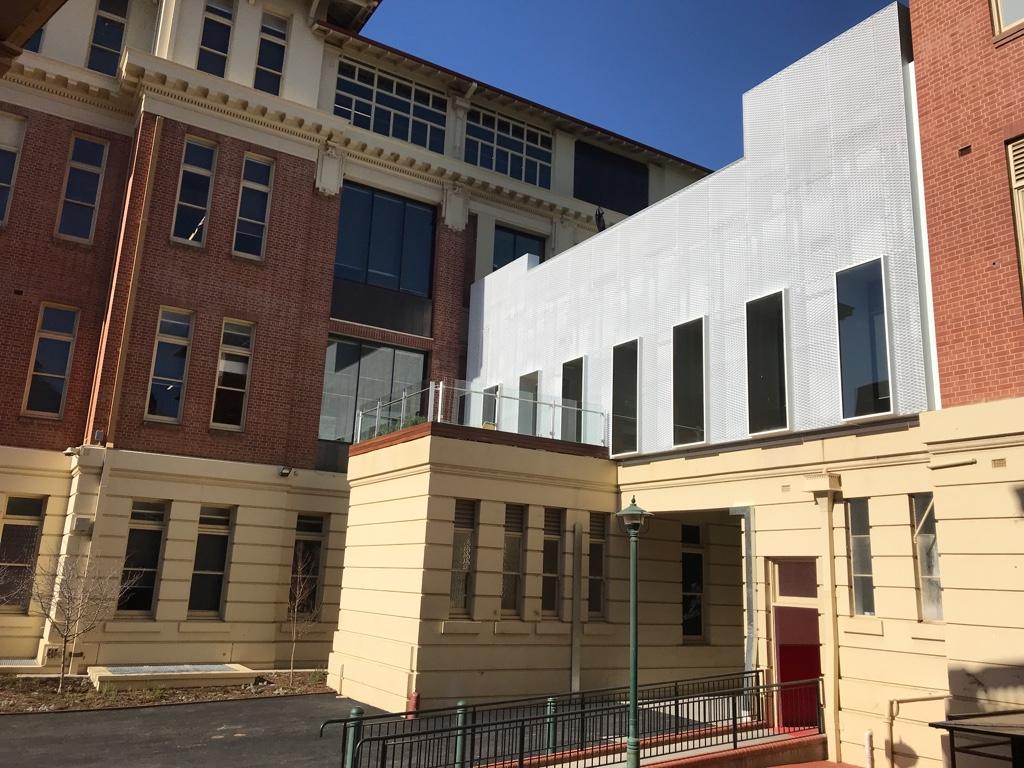 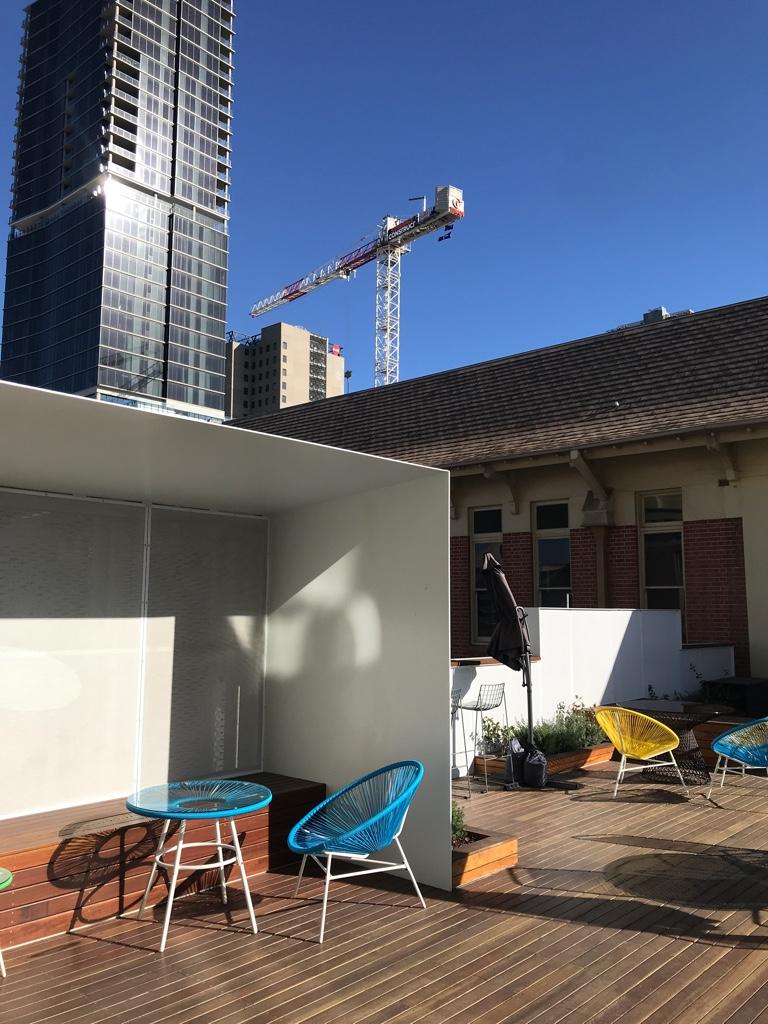 Great shots Andy! The space is definitely coming together well!

As an aside, is that orange core numbering I can see on the North Terrace student tower across the road?
Walking on over....

Yes they are numbering the lift core levels on the student Apartment project.
Top

As an aside, is that orange core numbering I can see on the North Terrace student tower across the road?

They are. You could see the number 5 visible at the start of this week, with all of the Synergy construct branding then sitting above it.
Top

Can finally see over the metal dust screens to see what is left of the old hospital: 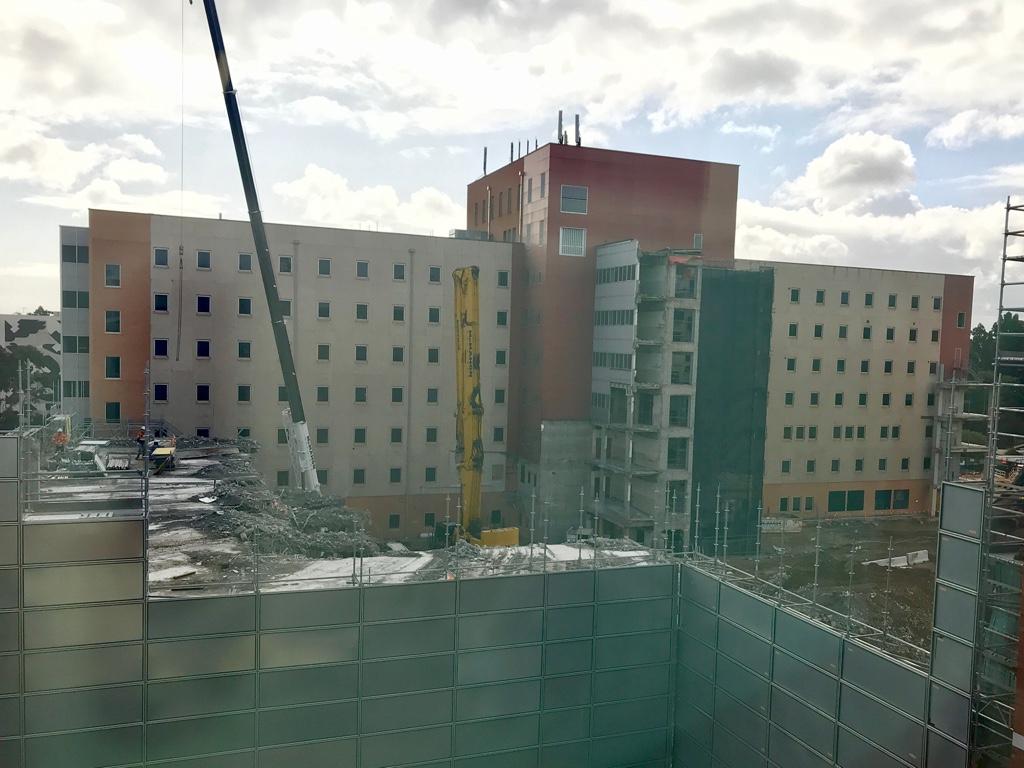 Demolition in the northern zone (residential wings) was meant to start early this year. Though probably delayed by the pandemic, presumably it'll commence soon. Excited to see those ugly blocks torn down.
Keep Adelaide Weird
Top

Great pics Andy - great to see something start to come together there.
Top

It would be so cool to see the rest of the Adl Uni development for ahead. This area would be transformed!
Top

Love the paintwork on the buildings, but the landscaping looks so cold and soulless... Compared to the other end of North Terrace where there are elements of timber, stone, varying colour, lots of planting. This however reminds me a lot of Rundle Mall, and not in a good way.
Top

Patrick_27 wrote: ↑
Fri Jul 03, 2020 4:25 pm
Love the paintwork on the buildings, but the landscaping looks so cold and soulless... Compared to the other end of North Terrace where there are elements of timber, stone, varying colour, lots of planting. This however reminds me a lot of Rundle Mall, and not in a good way.

I disagree about the white paint (I don't like it), but I am also disappointed that the design language (and material palette) of the main stretch of North Terrace hasn't been continued here. That said, I'm sure it'll a welcoming enough place to be once the scaffolding comes down and the landscaping matures.
Keep Adelaide Weird
Top

It's baffling how it came about that this section has a different design to the other North Terrace sections. Looking at Andy's great pictures there is some continuity with pavement width, lighting and tree choice but that's about it. Why couldn't there been more coordination between the City Council and State Government? The council must have had some say in granting approvals to the streetscape.
The original North Terrace precincts masterplan released back in 2001 by was I recall pretty clear paving, landscaping choices etc. should be consistent as the project proceeded in stages from East to West Terrace. With this part, the North Terrace frontage has been treated more as a boundary of Lot 14 rather than part of the Terrace masterplan.
Don't get me wrong - it looks great and a big improvement but like others have mentioned on here above, it's intriguing how these design decisions come about. It can't have been a question of funding as the finishes are obviously of high quality.
Two steps forward, one backwards I guess.
Top

The Advertiser wrote:Hotels, a helicopter landing pad, laneway bars, places of worship and a childcare centre will all be allowed on Lot Fourteen , development plans for the innovation, education and cultural precinct have revealed.

New plans show flashy billboards, “adult entertainment”, amusement arcades and residential apartments or housing have been ruled out for the old hospital site on North Terrace.

The site had previously been zoned Institutional (university/hospital), but a new development plan amendment has paved the way for a raft of new uses.

Height limits for the site have been set at 53m – about 15 storeys.

But the plans do allow discretion for what will become the centrepiece of the site – a Entrepreneur and Innovation Centre – that the State Government hopes will help secure a world-leading tech company as its anchor tenant.

That building can exceed 53M providing the design proves “exemplary standards of architectural merit”, the building “positively contributes to the quality and function of the urban fabric of the precinct” and it does not cast too great a shadow on the Adelaide Botanic Garden.

A promise by the former state government to hand back a strip of land to the Botanic Garden, that had been taken when the old hospital was originally built, has been ignored.

Instead, a large swath of open public space will run adjacent to the gardens behind a proposed Aboriginal Art and Cultures Centre.

To further reduce any impacts on the plan, it says building heights should provide an orderly transition scaling down towards the Adelaide Botanic Garden and Parklands and scaling up to buildings facing North Terrace and Frome Road.”

Premier Steven Marshall said the plan encourages the integration of Lot Fourteen with its neighbours.

“There will be thousands of jobs on site at Lot Fourteen and this sign-off will pave the way for new amenities to cater for so many people on the site,” he said.

The innovation zone of the site – that will host the Entrepreneur and Innovation Centre and an International Centre for Food, Hospitality and Tourism Studies – is expected to also include child care, a community centre, convention facilities, an indoor recreation centre, library, bars restaurants and shops.

But the plan rules out residential accommodation, in line with a promise from Mr Marshall from Opposition. The idea of housing development had been flirted with by the Weatherill government, but was dumped when a private proposal for the site fell over.

Mr Marshall said now that the plans are finalised, work can continue to bring the State Government’s vision for Lot Fourteen to life “as a premier innovation precinct, creating thousands of jobs”.

“It will help ensure our plan for Lot Fourteen will become a reality, with the next phase of infrastructure delivery including the Entrepreneur and Innovation Centre, Aboriginal Art and Cultures Centre, International Centre for Food, Hospitality and Tourism Studies, and beautiful open public spaces for everyone to enjoy.”

“But we remain disappointed the state government will not hand back land to the botanical garden,” he said.

Land going back to the Botanic Gardens and the Modern Art Museum were the two biggest positives for this site, such a predictable shame
Top
Post Reply
713 posts