All high-rise, low-rise and street developments in the Adelaide and North Adelaide areas.
Post Reply
10 posts • Page 1 of 1
Message
Author

Well this is disappointing. West Franklin next stage seems to be another cookie cutter 17 level student accom building.

This site was technically meant to be stage 3, so it'll be interesting what happens with Stage 2 (given the resident's corporation rejected the initial proposal for the Balfours corner).

I'm not fussed about it being student apartments so long as it's architecturally sound. The disappointing thing about this block, however, is rather than developing into a permanent community it's predominately turned out to be short-term accommodation - with OAKS managing the majority of apartments across Precinct, Gallery and West Franklin, and with many remaining apartments also rented rather than owner-occupied.
Keep Adelaide Weird
Top

Well below what should be expected imo. 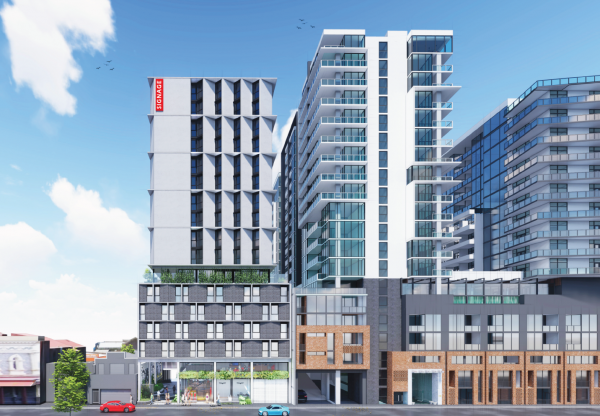 Really curious now if the Waymouth Street proposal is by Brown Falconer too because it would probably be the first thing of theirs I really liked. This thing, however... not so much. I mean it's fine, especially as a mid block building, and I hope it's built to add some life there. But I'm real tired of this precast look.
Keep Adelaide Weird
Top

Having a read of the planning documents, the height of this one, including the plant room is 55m.

I have to say, that for a student apartment building, this one is one of the better ones. Wont win, any architectural awards, but it is inoffensive and has some interesting features, such as its podium.
Top

What happened to that really cool design that sat over the communal space that, I think was rejected when it went to consultation?
Top

Mpol03 wrote: ↑
Tue Aug 06, 2019 6:33 am
What happened to that really cool design that sat over the communal space that, I think was rejected when it went to consultation?

That was Stage 2 on Franklin Street, which is on hold because the community didn't approve the land-use change. Hence, this Stage 3 building has leapfrogged it to move ahead.
Keep Adelaide Weird
Top

I feel that not only does this look like crap but also so out place with what’s been built.
Top


High-profile developer Nicho Teng backs out of student accomodation building project
The developer who made headlines for wanting to demolish a $3.2 million Mitcham mansion has sold part of his West Franklin site.

The developer who made headlines last month for wanting to demolish his Mitcham mansion to build a French chateau has backed out of the third stage of a $300 million CBD complex.

Greaton managing director Nicho Teng is “in the process of selling” 54-58 Elizabeth St, which is earmarked for a 17-storey student accommodation tower, expected to cost $26 million.

That plan, which would have 300 beds and include a lobby, gym, cinema and games room, will go before the State Commission Assessment Panel on Thursday.

A Greaton spokesman said the sale was at the settlement stage with a company which could not be named for confidentiality reasons.

He said Greaton would provide project and development management services to the new owner if required.

The accommodation tower is the third stage of the $300 million West Franklin development, on the corner of Franklin, Elizabeth and Morphett streets in Adelaide’s West End.

More than 500 residents moved into the development’s first stage which opened in February and comprises two residential towers – one 19 storeys and the other 17.

The second stage of the project – one of the largest urban regeneration projects undertaken in the city – remains under a cloud.

The Advertiser reported in January that Greaton wanted to change the site’s community plan to be allowed to build above the historic Balfours brick facade on Morphett St.

The spokesman said options for stage two were still being reviewed to ensure future development best matched the use of the site.

Mr Teng said the West Franklin development, overall, had been embraced by the Adelaide market.

“We are extremely happy with the way the project has met the needs of locals and we have some further exciting announcements to make in the near future,” Mr Teng said.

The Advertiser reported last month that Mr Teng had planned to knock down his $3.2 million Carrick Hill Drive mansion and spend millions building his dream home, but is now looking to sell the property because it no longer suited his lifestyle.

He will move in to an executive apartment in the West Franklin complex.

This building was granted DPC by the SCAP at its hearing yesterday.
Top
Post Reply
10 posts • Page 1 of 1