All high-rise, low-rise and street developments in areas other than the CBD and North Adelaide. Includes Port Adelaide and Glenelg.
Post Reply
1021 posts
Message
Author

I was chatting to a guy at their sales centre in the city yesterday and I mentioned about all the low rise buildings around the old harbours building. He told me the council has put a height limit on this development of 4 stories. He said there is the demand there for taller apartment buildings but the council said no apparently...
Baytram 366's Flickr: http://www.flickr.com/photos/34520752@N07/collections
Top

Disappointing if he was accurate.
Our state, our city, our future.

It wouldnt surprise me given the stigma associated with New Port.

Is that how the site was zoned or have they slapped that restriction as part of the approval process?
Top

Tim Ross was doing some shows in the foyer of the Marine & Harbours Building, and last night Starfish were giving people a brief tour of the 7th floor before the show.

Having been abandoned for 20-odd years, it's in surprisingly very good condition — relatively low levels of graffiti and no visible damage. The views from the former cafeteria across the port were stunning, and I imagine will be even better from the roof. They admitted that it would have been cheaper to knock it down and rebuild, but they're very proud about retaining the building and bringing it back. They're making a point of celebrating all the board marked concrete, and also keeping the original lifts and lift signage. Everything new will be sympathetic to the original. There will be a new Arbour restaurant open to the public (sister outlet to the one they have at Bohem), plus the rooftop bar & cinema (which will replace the existing observation tower on the roof). The hotel will also operate some rooms right on the waterfront. They're very confident of opening at the end of 2020.

They said they're trying to really do the right thing by the Port, and respect the history of the area. Even the townhouse developments are being done with reference to materials and even saw tooth roofs from the area. They apparently bid on the other site that included Shed 26 as well, and had intended to retain it. They've since tried to engage with Cedar Woods to at least get everyone on the same wavelength, but I got the impression the efforts were very one way.

Anyone know if they have resolved where they are moving the City of Adelaide clipper ship? There is a proposal for it to be moved to Dock Two. If anyone wants to see the schematic maritime plan for the area it’s found here.. https://www.cityofadelaide.org.au/?ligh ... m-j166i06p
Top

how good is he wrote: ↑
Mon Jun 03, 2019 10:53 pm
Anyone know if they have resolved where they are moving the City of Adelaide clipper ship? There is a proposal for it to be moved to Dock Two. If anyone wants to see the schematic maritime plan for the area it’s found here.. https://www.cityofadelaide.org.au/?ligh ... m-j166i06p

The strategy that was released in 2017 studied four options (pp. 43-45) and favoured Dock 2, primarily because Fletcher's Slip/Shed 26 was ruled out of hand by the developer and Dock 2 provided the easiest (not best) parking and colocation opportunities. Private land at McClaren Wharf adjacent Lighthouse Square and Lipson Street was not considered (which would have met most of guiding principles IMO). The next step following this Heritage Boats and Ships Strategy was supposed to be a masterplan of the Dock 2 proposal and final agreements between government, the Maritime Museum and City of Adelaide owner/volunteer group. But there's been change of government so who knows where that's at.

I believe the volunteer group is broadly supportive of the maritime village concept, but not fully its location at Dock 2, and certainly not relocation of the City of Adelaide out of the Port Centre until such time as it is developed. The Dock 2 proposal is predicated on a pedestrian bridge across Dock 1 (which would provide a waterfront discovery trail of about 800 metres length from the Lighthouse), pedestrian access under the Port Expressway bridges, as well as clearer road (and potential ferry) links. Relocating the clipper to Dock 2 before then would deprive it of public visibility and engagement. But the developer of Dock 1, Starfish, wants it moved post-haste because it considers it visually imposing and in the way of their planned floating hotel rooms. I'm curious to see how the government handles this too, as a successful outcome is going to require some coin that they neither have a lot of or an inclination to spend.
Keep Adelaide Weird
Top

Slight change of subject but I'd like to see a small scale shipping container hotel built on dock 2 overlooking the river. The theme would be on point and it'd be an alternative tourist market for shipping and port enthusiasts.

Another pocket of significant land in Port Adelaide has been released by Renewal SA for development.

The Urban Renewal Authority this week put out the 12-hectare site at the corner of the Port River Expressway and Perkins Drive for expressions of interest from developers.

It was previously the site of fertiliser company Incitec Pivot and has been pitched to investors as appropriate for commercial, light industrial or mixed-use development.

The expression of interest process was being conducted by real estate firm Jones Lang LeSalle.

Renewal SA acting chief executive Mark Devine said the land presented a “rare offering … due to its strategic location and access to key transport routes,” as well as its nearby defence industry.

“The land would be suitable for local, national and international developers or investors with the vision to capitalise on this unique land holding and its strategic location within Port Adelaide,” Mr Devine said. 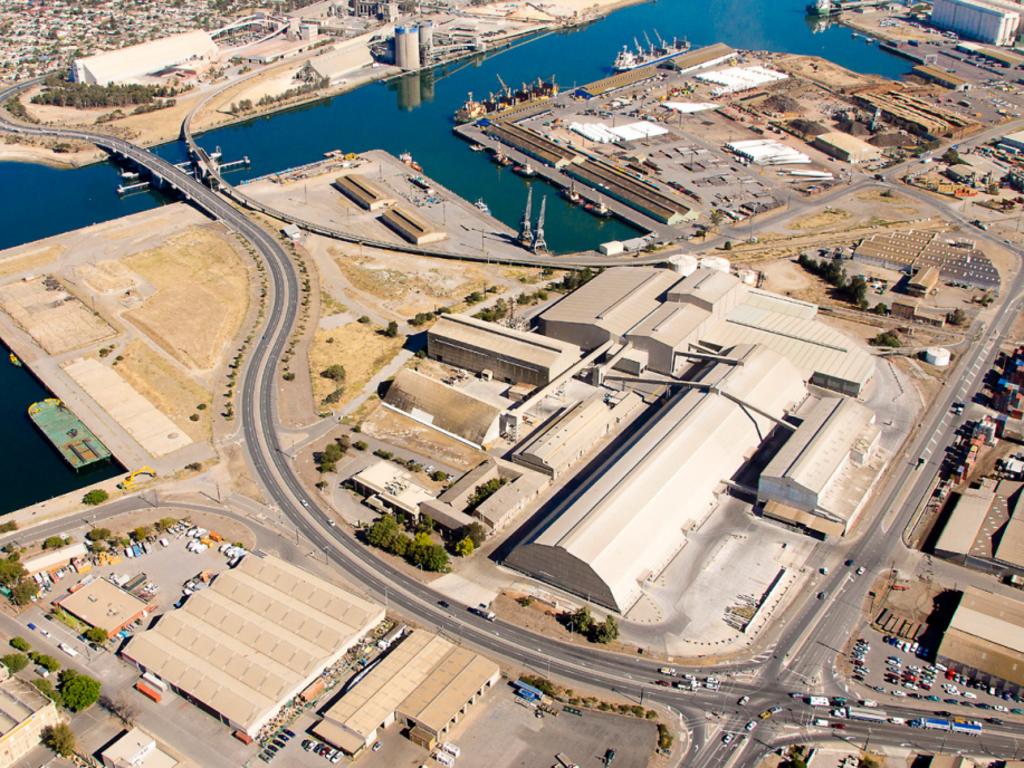 Port Adelaide Enfield Mayor Claire Boan there had been “lots of interest” from smaller developers wanting to get involved in Port Adelaide because it was “a great opportunity to invest”.

“We’re keen and the quick purchasing of land in the area by other developers shows developers are impressed and know it’s the place to be,” Mrs Boan said.

“We’re wanting to attract (development and business) here and with the Defence nearby as well, there are lots of opportunities and I think people are realising that.”

Starfish Development last year began work on its Dock One housing development in Port Adelaide and would also develop Port Approach South, on the other side of the expressway at a later stage.

Cedar Woods would soon begin its Fletcher’s Slip development on the other side of the Port River.

This will a combined total of 1500 homes.

Expressions of interest for Port Approach North close on Thursday, July 11, at 2pm.


And from the https://ourport.com.au/precinct/port-approach/ site..


The Port Approach precinct will become a new business park of light industrial uses on the northern side of the Port River Expressway with office, commercial and mixed-use development providing a buffer from industry and transitioning to residential buildings along the waterfront.

Starfish is developing the south approach.
Pretty funny that that site is using a photo of Docklands in Melbourne as a banner, especially considering what's actually approved to be built at the Port.
Top

Could be good to realign/straighten the section of road travelling to and from the bridge before doing any of this, considering the fertiliser facility was the only reason this road was curved in the first place. Would love to see Starfish take this site as well, considering they have an interest in the preservation of the Port, they might consider working alongside those who operate the City of Adelaide clipper museum and find a home for it within the site?
Top

The Marshall government’s abandonment of Port Adelaide reaches new depths as they’ve now put the Port Dock spur line on ice, following their pulling of funding for the Failie and the ‘public interest” trashing of Heritage listing for Shed 26.
Top

Maybe not so much Marshall who is a big Port Adelaide supporter, but I think his Lib party know they are never going to win Pt Adelaide even if they spend millions, so why even try. Hopefully some other good news will come. ....
Top

Hopefully the hundreds of millions is residential development will mean that government stimulus will become less relevant in the near future. But really, what is with developers and their allergy to public transport as an inclusive part of their develooements. Why aren't the relevant developers banging down the governments doors demanding the Dock station be the n place as part of the development.
Top

Honey of a City wrote: ↑
Thu Jun 20, 2019 9:42 pm
The Marshall government’s abandonment of Port Adelaide reaches new depths as they’ve now put the Port Dock spur line on ice, following their pulling of funding for the Failie and the ‘public interest” trashing of Heritage listing for Shed 26.

I hadn't heard about the Failie being defunded. So the Heritage Ships and Boats Strategy 2017 I mentioned a few posts up has already been abandoned. This sort of heritage and planning staff should be bipartisan, ffs. I mean, what's this Liberal government's vision for the Port (and state, for that matter)? Outta sight, outta mind?
Keep Adelaide Weird
Top

how good is he wrote: ↑
Thu Jun 20, 2019 10:12 pm
Maybe not so much Marshall who is a big Port Adelaide supporter, but I think his Lib party know they are never going to win Pt Adelaide even if they spend millions, so why even try. Hopefully some other good news will come. ....

Not confident about any good news from this crowd. Local bus services have already been cut and they’ve also announced the closure of the Port Adelaide TAFE. Bit of a pattern happening here. The ditching of the spur line is particularly bad news, since a lot of businesses have invested money in the vicinity in anticipation of the station being built, and now it’s all too hard for the government. https://indaily.com.au/news/2019/06/20/ ... lway-line/
This may have a big impact on the Dock One development and its hotel, and the marine park plans for Dock Two as well. Marshall may claim some connection with Port Adelaide but action speaks louder than words and so far the only action in the Port from this government has been slash and burn.
Top
Post Reply
1021 posts