Bridge over Goodwood train station in ‘early stages of planning’ two months after it was due to be complete
Eugene Boisvert, Eastern Courier Messenger
February 26, 2018 6:00am

A BRIDGE over the Goodwood railway station to complete the Mike Turtur Bikeway is still in the “early stages of planning”, two months after it was due to be complete.

The State Government promised to build a $10 million bridge connecting Railway Tce North in Goodwood and Norman Tce in Forestville in May 2016 to give cyclists a direct connection between the two suburbs.

Currently, cyclists have to either walk through a subway under the station or detour through level crossings at Victoria St and Leah St.

The bridge would also provide an overpass for pedestrians to get to the railway station platforms, rather than having to go through the subway.

A Transport Department report to State Parliament later in 2016 said it would be complete by the end of 2017.

After four weeks of inquiries, Transport Department senior media officer Danielle Gleeson said the bridge was still in the “early stages of planning”.

“An update will be provided in the future,” Ms Gleeson said.

“A more direct ride on this route will encourage more people to swap the car for the bike and that means reducing congestion for those motorists who have little option but to drive,” Dr Bonham said.

Building the bridge would require the demolition of Brenda Russell’s house at the corner of Railway Tce North and Devon St North, in Goodwood.

Ms Russell said she expected negotiations for the Transport Department to buy her house to conclude in two or three months.

She said the delay was not a problem because she wanted to find the right house to move to after living next to the tram for 40 years.

“They’re being very supportive of me,” Ms Russell said.

The bikeway’s bridge over South Rd reopened in January after being closed for a year after pieces started falling off it.

Still in early planning... are you serious? This should have been delivered months ago.
Top

Still in early planning... are you serious? This should have been delivered months ago.

I'm optimistic that they will come to their senses and realize it needs to be a larger project with a genuine tram/change interchange - gotta be at least a $50m job for that though surely. Another election announcement perhaps?
Top

Still in early planning... are you serious? This should have been delivered months ago.

I'm optimistic that they will come to their senses and realize it needs to be a larger project with a genuine tram/change interchange - gotta be at least a $50m job for that though surely. Another election announcement perhaps?

They've already announced that the level crossing at Goodwood Road will be removed. Could this be part of what's going on? If they're putting a bridge at Goodwood Road, maybe that will mean raising the line right through to Goodwood station and a train-traim interchange?
Top

The Lord Mayor is encouraging people to get on their bikes and try out the newly completed section of the North-South Bikeway between Grenfell Street and Pirie Street.

Materials used, along with greening elements, mean that the concrete bikeway is easily distinguished from the road and footpath.

In addition to this newly completed section, the southern section of the bikeway between Wakefield and Carrington streets recently received an impressive makeover.

Lord Mayor Martin Haese inspected the bikeway this morning and looked forward to it extending further north to the new city high school that is under construction and to North Adelaide.

“This project is great news for those who ride bikes, for business owners, property owners, motorists and pedestrians,” said the Lord Mayor.

“It is a project that is providing the city with the type of high-quality and safe, separated bikeway design that we deserve.

“An exposed aggregate bikeway and greening elements improves the experience for bike riders, drivers and pedestrians, visually separating the bikeway from the road.

“Council is committed to delivering an improved design, further greening and better traffic flow, while providing sufficient car parking right along the route.

“I again thank the State Government for partnering with us on this record investment in safe, high-quality bikeways and I encourage people to come and view this new section for themselves.”

The City Bikeways project is being developed in partnership between the City of Adelaide and the State Government. The unprecedented joint investment of $12 million is providing transport options that are safe and sustainable, and will ensure Adelaide remains one of the world’s most liveable cities.

Let's celebrate Martin, when the bikeway actually links North to South - at this rate it may be in 2020
Top

I have a little bit of information about the Outer Harbor greenway, courtesy of the Westside Bike User Group:


I had a very useful and informative 'walkaround' this morning of the Greenway between the Parklands and the West/Drayton St junction (in your picture above). The bluestone wall you asked about will be partly 'remodelled' and the cement block buildings behind it (see your green line) will go. The Greenway will continue more or less straight through this area from Coglin St through to the short stretch of Drayton St in the lower right corner of your pic. It seems likely that we will have to wait until at least the first quarter of the new FY for this as there are quite a few heritage, architectural and other approval processes to be worked through! Incidentally the bit of Drayton St shown will eventually be one-way and is likely to be extensively remodelled to bring the separated Greenway path much closer to to the edge of the rail reserve. The remodelling is likely to include changes to the new ramp way entrance to the Bowden Station section of the path as well (so no need to get too worried yet about the proliferation of bollards you might have seen there!) All of this work will be supervised by DPTI (or rather they will contract it out). But approvals first!

The comments relate to the below picture which I had knocked up with a suggested route for the greenway, seeing as the railway cutting virtually butts up to the existing southern boundary fence of the gasworks site. Judging from the above comments, the wall and the building I have highlighted in red will be demolished (or 'remodelled') - possibly also the second outbuilding which can be seen further west of the one circled. Based on the above I think the route will likely be straighter i.e. without the kink I have drawn. 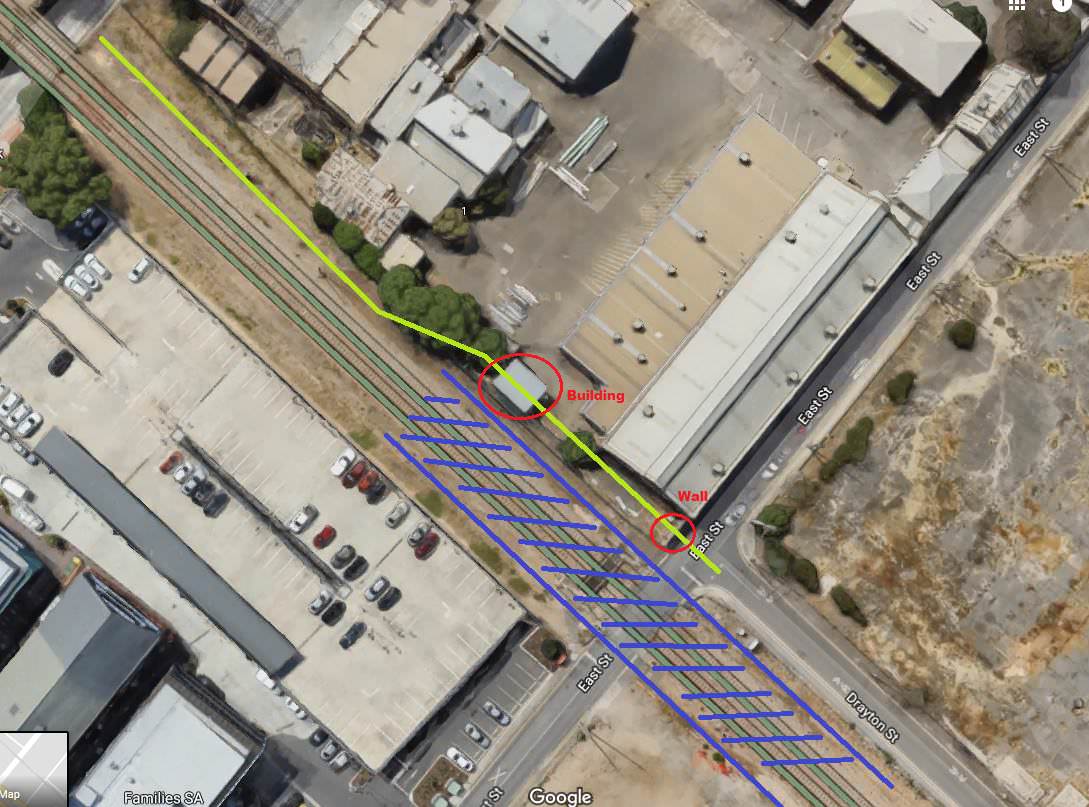 Bit of a shame about the timeframe, but at least they're talking months and not years...
Top

Is the overpass over South Road open now?
Top

See the last paragraph of the quote in your earlier post

I received a phone call last week from a lady who identified herself as a volunteer for Lee Odenwalder (ALP member for Little Para/candidate for Elizabeth) and she asked me what I thought was a key issue for the election. I suggested a cycling policy that provide a safe route for a primary school student to cycle from home in Blakeview to school at Trinity College Gawler (Evanston Park). She assured me that she would pass it on and get back to me.

A couple of days ago, I received a letter that told me that the key issue for this election is jobs. I expect it is a form letter sent to thousands of people, but it was personally addressed and posted, so I read it as "you got it wrong, safe cycling is not important".
Top

See the last paragraph of the quote in your earlier post

I mean at Croydon, not Black Forest
Top

This looks dangerous for the future of bike sharing in Adelaide:

Council to de-fund Adelaide Free Bikes, as expected. But with Antic circling in the waters with a clear anti-ofo stick up his ass and the company operating on a tight leash (year by year approvals) it's not hard to picture a scenario where both Free Bikes and the private operators vanish from the landscape. Lol I guess all Alex needs to do now is convince some local traders to get out there and dump yellow bikes all over the city so he can start having them shut down.

Given active transport barely got a mention in the election and the low likelihood of the liberals wanting to contribute to local bike infrastructure builds, it's not a particularly rosy outlook if you use a bike to get around Adelaide.
Last edited by mshagg on Tue Mar 20, 2018 11:19 am, edited 1 time in total.
Top

If there was a top 10 list of adversaries for cycling in Adelaide, Cr Antic and Anne Moran would surely be fighting it out for #1 and #2 on the list. The Adevertiser would be in my personal top 5

Big infrastructure investments are usually under-valued and & over-criticized while in the planning stage. It's much easier to envision the here and now costs and inconveniences, and far more difficult to imagine fully the eventual benefits.
Top

Quick update on the North-South Bikeway

Users browsing this forum: No registered users and 8 guests