sam wrote:I think they should take it one step further and make Tram travel free between North Terrace and South Terrace

Just sent off an email to the Minister for Transport, will be interesting to see what the response is.

Got a response today:


On behalf of the Minister for Transport, the Hon Patrick Conlon MP, I acknowledge receipt of your letter dated 1 December 2005, concerning the tram line extension.

Hopefully that means they've realised 'Hey, that's a pretty good idea' and are currently working out the fine details of getting it to work before they give me an official response...

Or perhaps I'm too optimistic!

That's the default reply you'll get from ministers, while they do their research and then figure out how to reply to you.

Sometimes it gets somewhere, other times, it just gets left in the 'not my problem' basket.

But at least they've acknowledged your email.

January 9: Trams on track
By LAURA ANDERSON
29dec05
ADELAIDE'S new trams will pick up their first passengers on January 9.

Premier Mike Rann said two of the new trams would start regular commuter services from that date, with plans for another six to be operating by April.

"All 11 will be in service within the year after that," Mr Rann said yesterday.

"In addition, five of the current 'old-rattler' (H-type) trams are being maintained for use on weekends, future Proclamation Days and other important occasions," he said. "This means much more than just new trams for the Glenelg route, but a whole new experience for commuters since we overhauled the entire track, including construction of many new platforms." The Government has bought 11 trams as part of the $21 million extension of the Glenelg line down King William St and North Tce. The 11 trams - ordered from German manufacturer Bombardier - cost $58 million. Mr Rann said the new trams would provide a new experience for commuters that would be "smoother, seamless and near silent".

However, Opposition transport spokesman Iain Evans said the trams had only been purchased "with the election in mind".

He said there were other models of trams with greater seating capacity available "but they didn't suit the Government's political timeline" with the March poll looming.

Mr Rann said the Government was still examining the feasibility of a further extension of the tram line to North Adelaide.

"I'm confident that the extended line will be well patronised, with more than 80 per cent of current tram users heading north of Victoria Square as soon as they arrive in the city," he said.

"I've said before that we are looking at the urban renewal benefits of tram extensions with an eye to further extensions down the track."
Top

AG wrote:However, Opposition transport spokesman Iain Evans said the trams had only been purchased "with the election in mind".

Because it's been a hell of a vote winner hasn't it.

Iain Evans, I crown you Tool. Of. The. Week!

Two of the eleven new trams are now in service, subject to an abnormal amount of political wank due to the looming state election in March.

On their first morning of service, they were so packed with enthusiasts that after less than half a dozen stops on each trip, they were full. Feel sorry for the regular passengers. 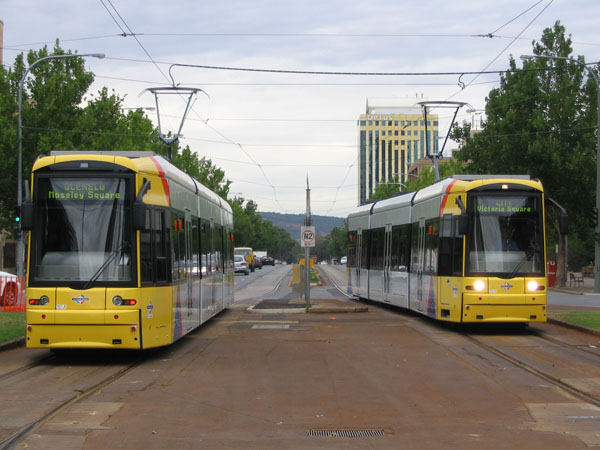 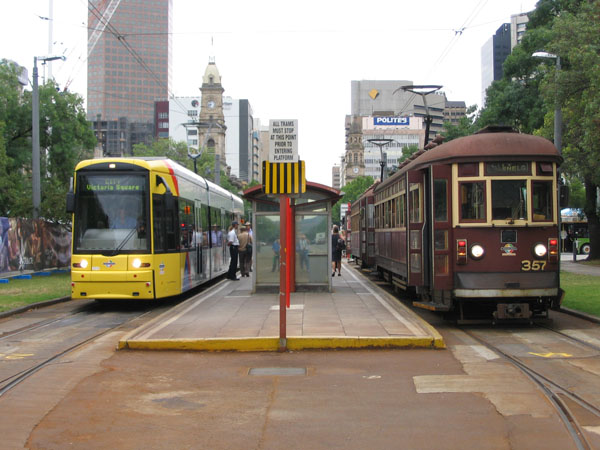 I'm hoping to catch a glimpse of them during my lunch break today... they also mentioned in the tiser somewhere that they'll be replacing circle line routes eventually. I hope that doesn't mean the 99C also... seeing as that goes past botanical gardens and the royal adelaide hospital.
Top

Had a ride on the Flexy's today. They're rather nifty. A few things I dont like, such as;
- the lack of stop buttons
- the placement of the ticket validators.
- the doors close automatically if there's no one around, regardless of if the tram is leaving or not. It freaks people out because they think the tram is leaving. The buttons on the doors seem to confuse people as well.
- the internal destos read "Line 1" instead of "City" or "Glenelg" when the tram is stationary at a stop.
- Some of the equipment, such as the fire extinguisher and first aid kit, are in German.

Other than that, they're funky. Hopfully the first of many improvments to PT.

A couple of things irk me about the tram network in general;
- The express back to Glenelg ran behind an all-stops. D'oh!
- The platforms in Victoria Square and King William Street suck compared to the new ones.
- Perhaps a be a stop on the overpass above Goodwood Station for transfers?
Top

Did it get packed out with trainspotters ATD? How did you feel about the seating/space?
Top

Howie wrote:Did it get packed out with trainspotters ATD?

It's no worse than the busses or trains. It's a commuter vehicle after all.
Top

i understand german so its no problem for me.
Top

aussie2000 wrote:thats really stupid how stuff is written in german

Well, what did you expect?

The design is German and they were manufactured in Germany!
Top

I got a very positive letter in the mail today...

I am pleased to advise that a proposal to extend free travel between North Terrace and South Terrace is currently being investigated by DTEI in conjuction with the Adelaide City Council.

Such a proposal is consistent with the public transport strategy of the Adelaide City Council and has merit.

DTEI will be meeting with the Adelaide City Council and other relevant parties to consider this proposal. It is expected that the outcome of this consideration will be known around mid 2006.

Thank you again for your letter and your interest in public transport.

Michael O'Brien MP
Parliamentary Secretart to the Minister for Transport.

Well I have to say that I am very happy with that response. I look forward to seeing what happens next!

Since the state hasn't taken ownership of the trams, it'll be repaired/replaced at Bombardier's expense.