(New FIXE branding above the door) 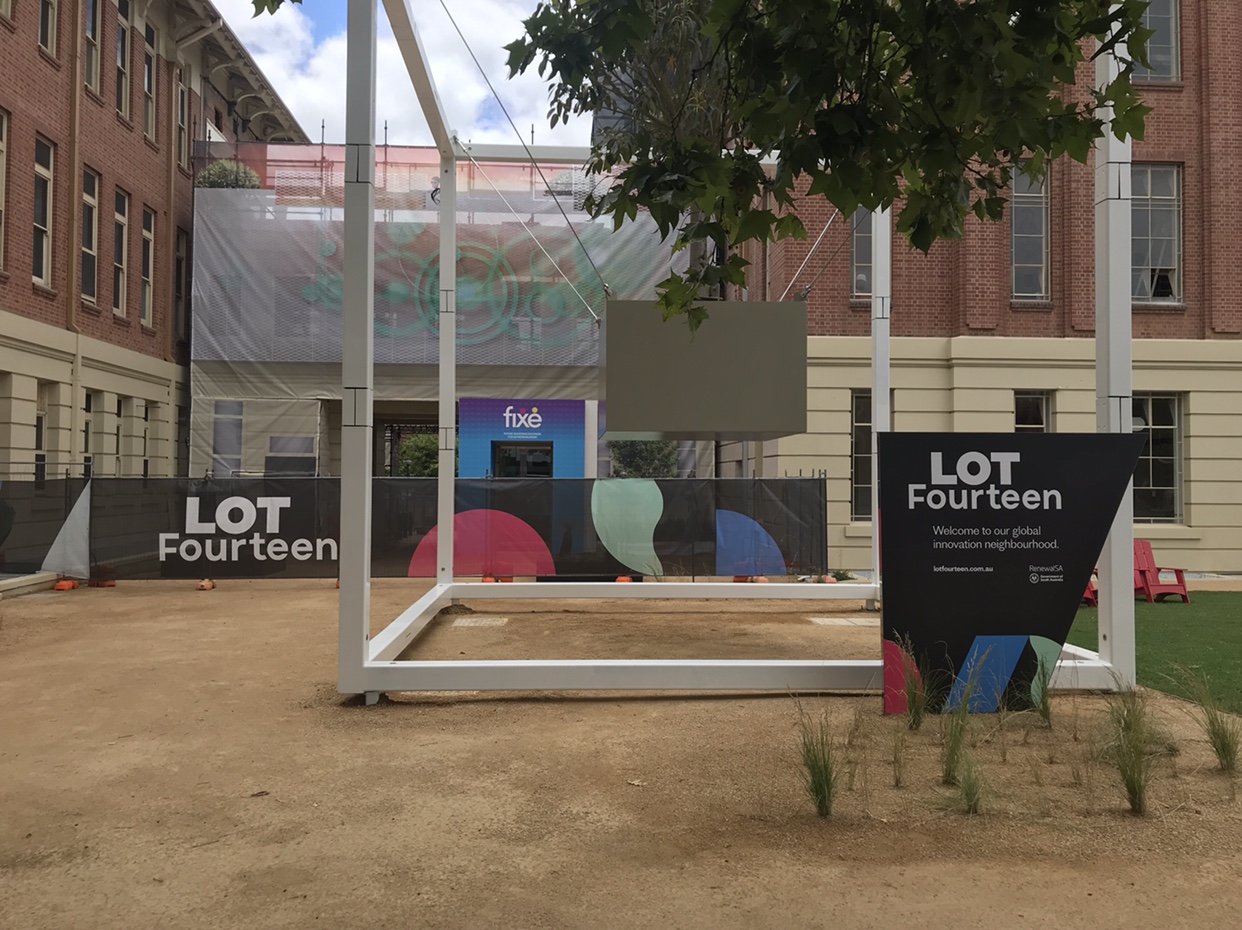 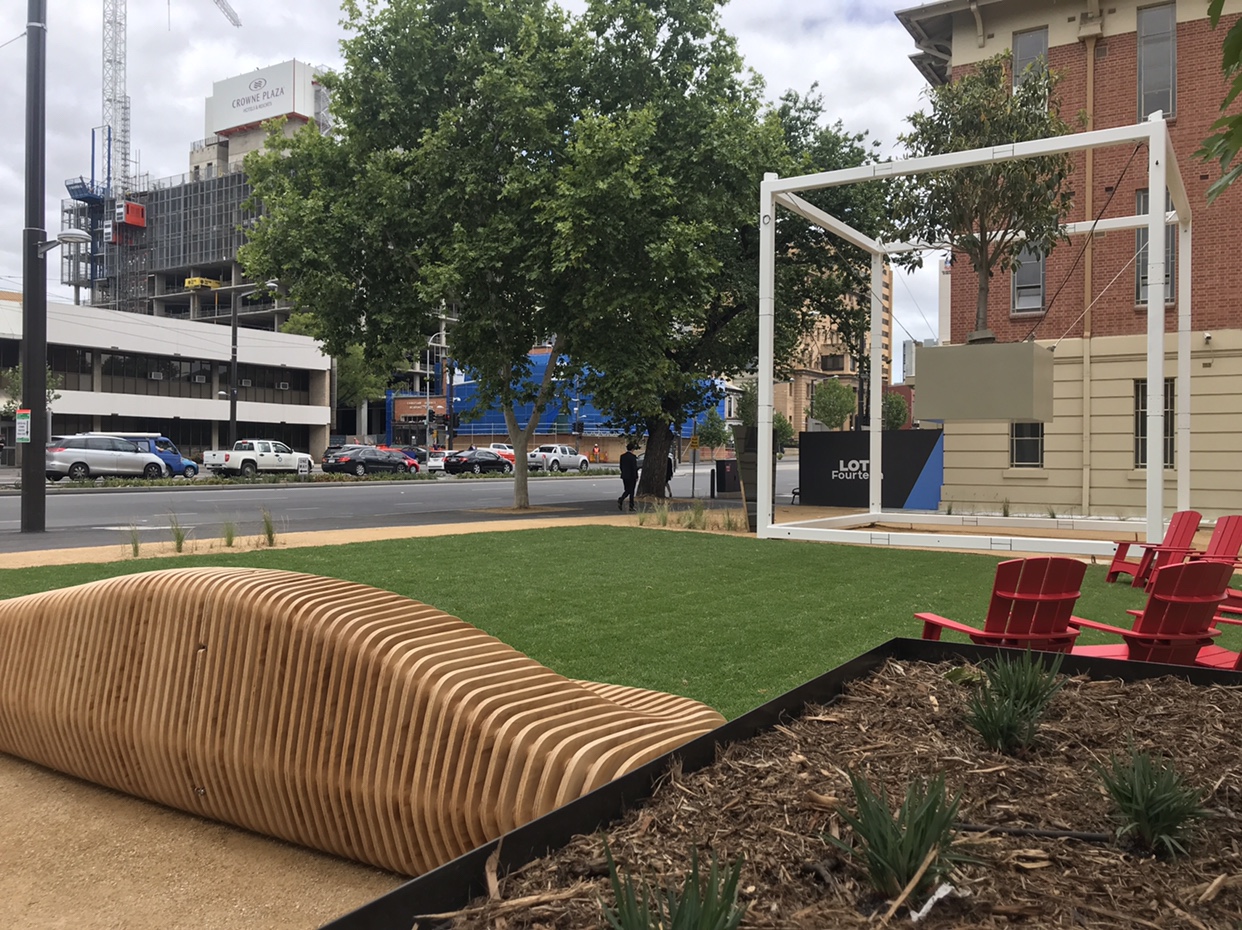 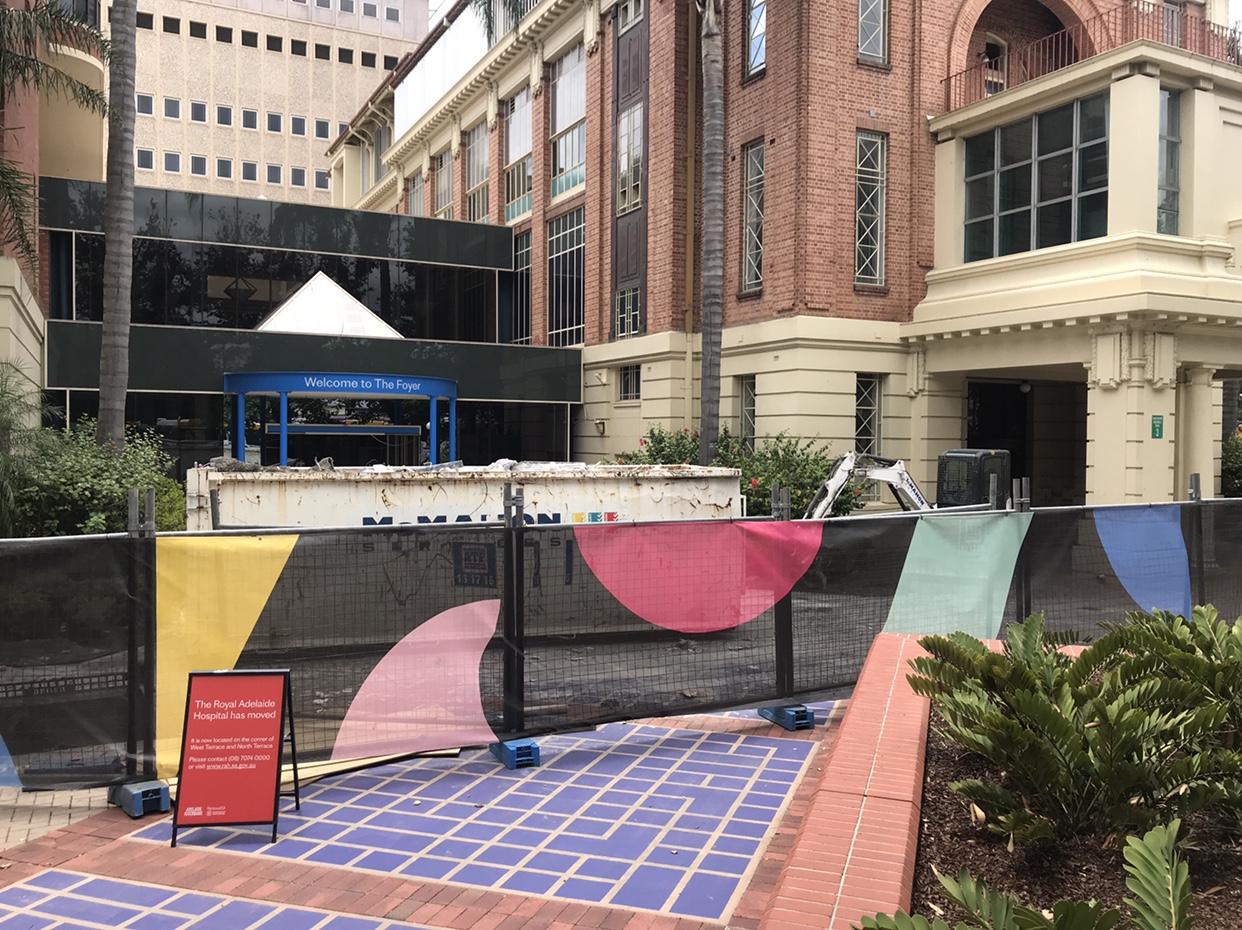 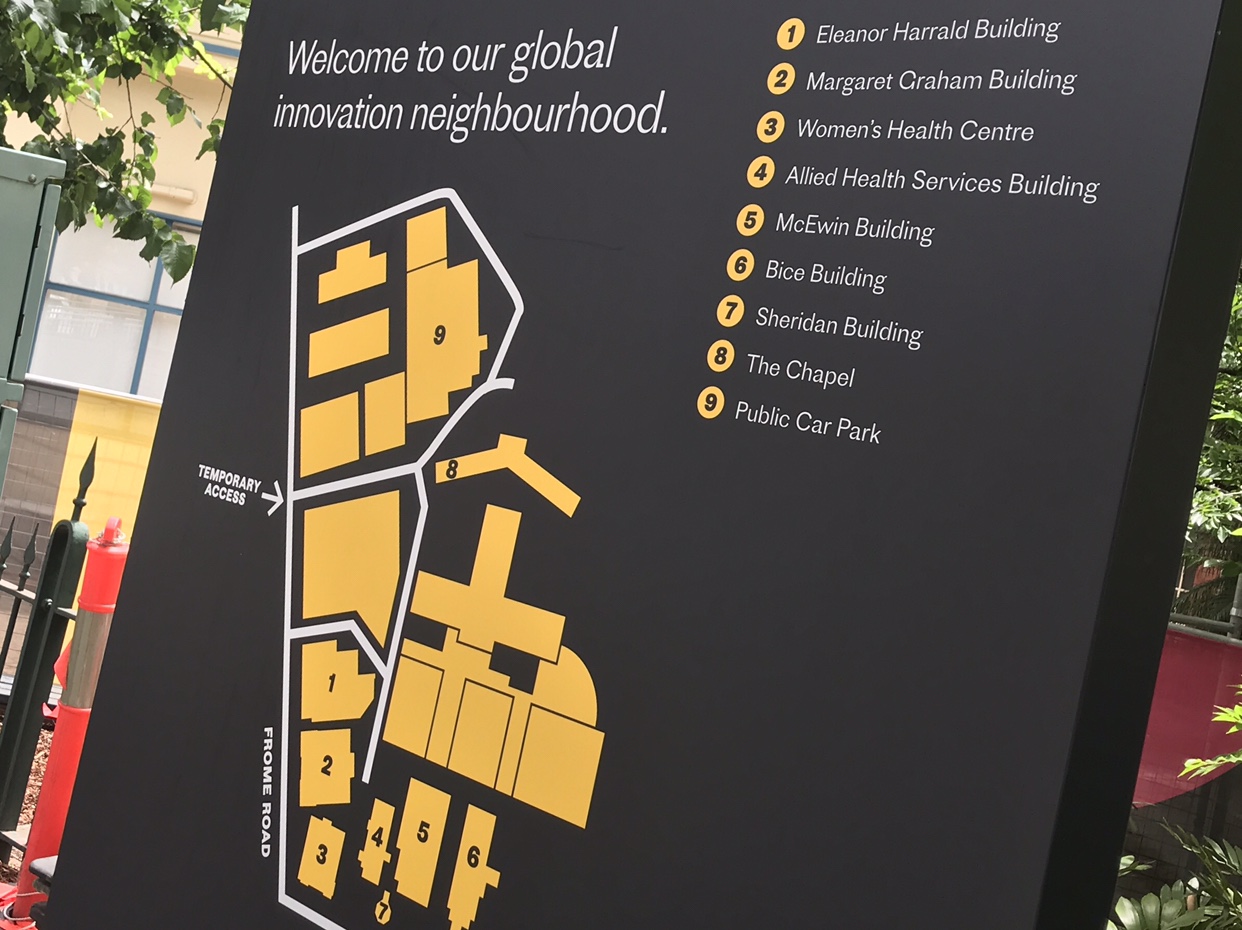 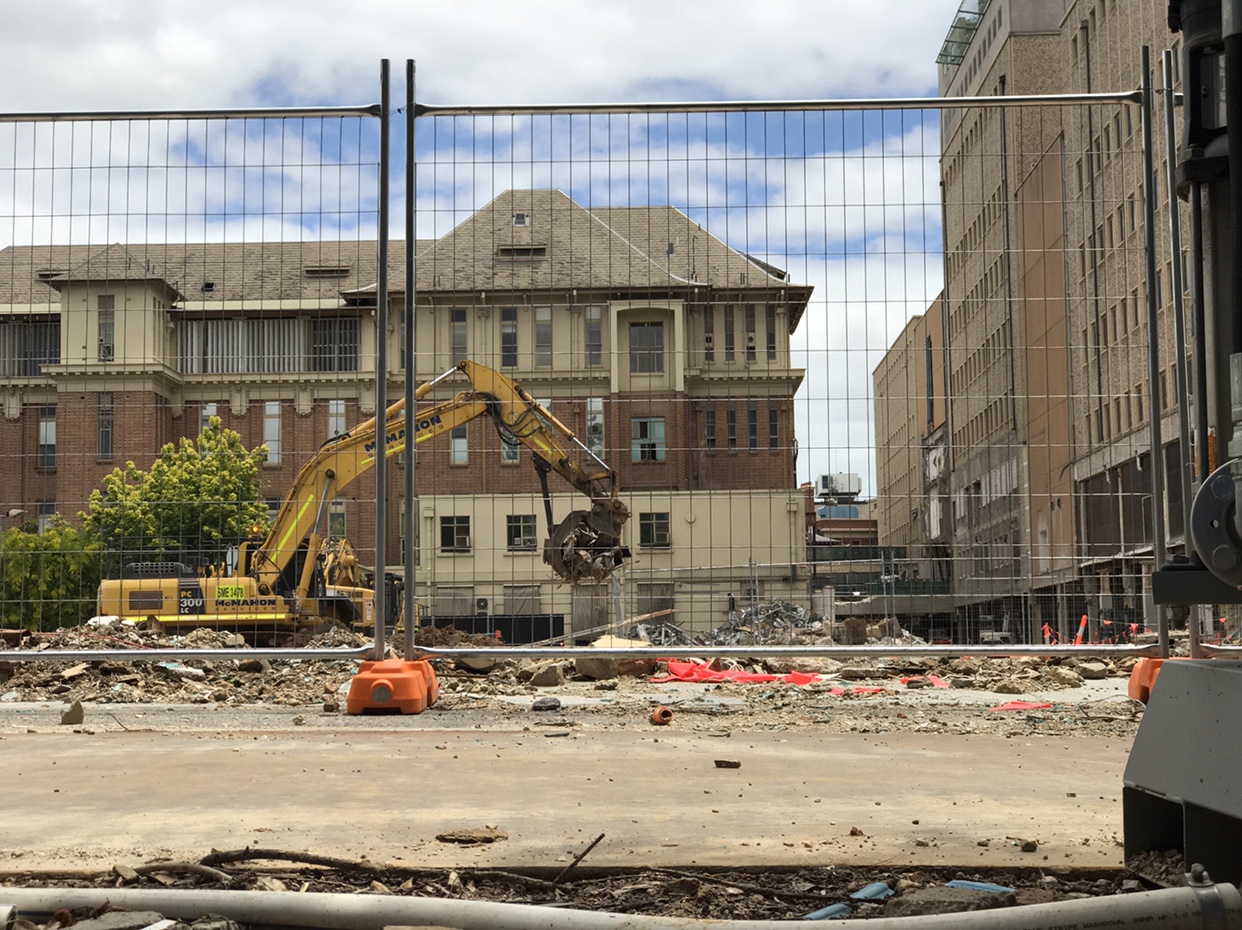 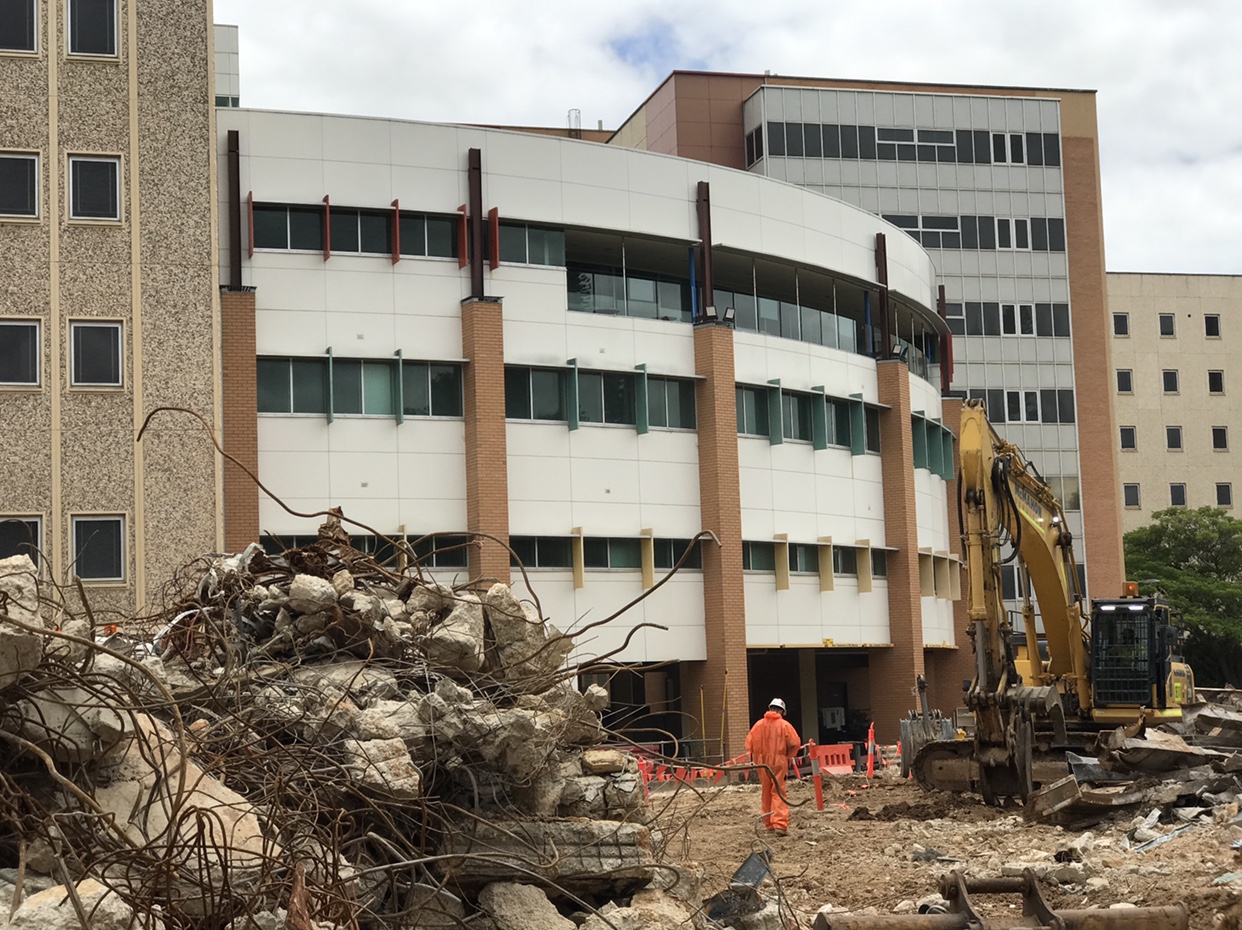 Also I think their new FIXE brand was launched recently (you can see some of the branding in the photos above):

FIXE, OR FUTURE INDUSTRIES EXCHANGE FOR ENTREPRENEURSHIP, LAUNCHED AT LOT FOURTEEN THIS MONTH, PROVIDING AN INNOVATION, INCUBATION, START-UP AND GROWTH HUB FOR START-UPS AND SERIAL ENTREPRENEURS LOOKING TO SCALE-UP IN FAST GROWING INDUSTRIES.

The Australian has an article saying that SA is getting the Australian Space Agency and it will be located here. 100 staff.

Can't see how that is a bad thing.

In the rag now

The Advertiser can reveal South Australia has beaten other states and territories – including former favourite Canberra – to make the old RAH (now known as Lot 14) home to the Australian Space Agency.

The agency is tasked with tripling the space industry by 2030, lifting its revenue to $12 billion and creating 20,000 jobs.

Prime Minister Scott Morrison is set to announce Adelaide will be the home to Australia's new space agency.

South Australia beat strong competition from other states to secure the headquarters, after enlisting homegrown NASA astronaut Andy Thomas to help with its campaign.

The agency will be based at Lot Fourteen, the former Royal Adelaide Hospital site, which is being transformed into an innovation precinct.

"This agency is going to open doors for local businesses and Australian access to the $US345 billion global space industry.

"Our Government's $41 million investment into the agency will act as a launching pad to triple Australia's space economy to $12 billion and create up to 20,000 jobs by 2030."

The Prime Minister said the agency was part of the Government's plan to generate a stronger economy in South Australia with more long-term, high-wage, high-skilled jobs.

Premier Steven Marshall said the space agency would help enhance the city's liveability and it would take the state's defence sectors to the next level.

"South Australia is the ideal location for the Australian Space Agency with a range of local space industry businesses already established here as well as a rapidly growing defence industry sector," he said.

"I look forward to working with the Federal Government, industry and our education sector to capitalise on this incredible opportunity for our state."

A number of space start-ups have already based themselves in Adelaide, including Fleet Space Technologies, which plans to launch 100 satellites.

Nano-satellite company Myriota has also raised almost $20 million in funding for its work.

She also said the state had played a big part in the development of the country's space sector.

"Our very first satellite was launched into space from Woomera just over half a century ago, so South Australia has demonstrated a very long history in space.

"Having the space agency headquartered here in Adelaide means that South Australia will certainly have a great opportunity to be a major contributor."

She expects South Australia will benefit from a "jobs boom". The state is already home to more than 60 organisations which employ about 800 people in the space sector.

"We're intending to grow jobs nationally and South Australia, it will certainly have every opportunity to grow more jobs for our young people [and] people who are potentially transitioning from other industries," she said.

"Particularly with the agency headquartered here in South Australia, we are well on target to triple the sector in the next 12 years."

She also hoped the news would encourage young people to pursue a job in the sector in the future.

"We want to encourage our young people to study science and maths at school, we want to be able to demonstrate to them … that there are jobs in the space sector and South Australia is now leading the charge."

Aeronautical engineer Matthew Tetlow, who is based in Adelaide, echoed the Government's excitement and said the agency would take the Australian space sector to the next level.

"We've been wanting a space agency for so many years and finally we've got it," he told the ABC.

"It's really important being very close to the decision-makers … it makes a big difference to the opportunities that you get.

"We're already a very tight-knit and collaborative ecosystem and I think this will just accelerate that and bring it to the next level."

The agency will be located at Lot Fourteen by mid-2019, and will employ 20 people.

Fantatsic news that Adelaide has won the rights to host the Australian Space agency......

Surely the Tonsley Innovation precinct or Mawson Lakes would be a more intuative location for such a project.
(Surrounded by hi tech nerds etc)

The old RAH site is better suited to a 5 star hotel/apartments/cultural institutions.

How much life will the Space Agency bring to the East End on a cold winter's Tuesday night? Not much in my estimation....
Top

20 jobs is hardly going to turn our pathetic economy around.
Top

Take it to the advertiser

You really are the answer to the question no one asked...
Walking on over....

Really wish there was a way to downvote comments sometimes!
Top

So positive as usual!
Top

Surely the Tonsley Innovation precinct or Mawson Lakes would be a more intuative location for such a project.
(Surrounded by hi tech nerds etc)

The old RAH site is better suited to a 5 star hotel/apartments/cultural institutions.

How much life will the Space Agency bring to the East End on a cold winter's Tuesday night? Not much in my estimation....

Tonsley wouldn't have been a bad place to put it for the reasons you mentioned, but North Terrace is a far better option. It is the national space agency it deserves an iconic building and a prominent location not to be tucked away down there.
Top

Will the agency's projects have connections with research at the universities?
Top

Anyone able to access and post this article??. I'm guessing it's funding for a new art gallery?

Pretty scant detail. I was hoping the council might be able to get a city deal for Adelaide to help finish Victoria Square and commence market arcade redevelopment.

City Deal go-ahead to transform old RAH as Space Agency announced
DECEMBER 11, 2018, AdelaideNow
Adelaide will get a City Deal, which will see the old hospital site on North Tce transformed into an international drawcard for tourists and entrepreneurs, it was announced this morning.

Prime Minister Scott Morrison and Premier Steven Marshall made the announcement this morning alongside the news that South Australia has won the race for the Australian Space Agency, as revealed by advertiser.com last night.

The deal will be the bookmark on an historic week for the state, which also has seen mining magnate Sanjeev Gupta announce hundreds of millions of dollars of investment Whyalla.

The deal will be a significant development for Adelaide and the timing of the announcement suggests the Space Agency would be its centrepiece.

As well as the Space Agency, the State Government wants the old Royal Adelaide Hospital site, now known as Lot Fourteen, to include an Innovation, Incubator, Startup and Growth Hub, an International Centre for Tourism, Hospitality and Food Services and National Gallery for Aboriginal Art and Culture.

Announcing the massive coup this morning, Mr Marshall said: “This is what vision looks like.”

Cities and Population Minister Alan Tudge was in Adelaide last month discussing the deal with the State Government.

Mr Tudge told The Advertiser at the time that his aim was to formalise an agreement for a City Deal with Adelaide before next year’s federal election.

“I am going to have a discussion with the Premier Steven Marshall about what the shape of a city deal might look like,” Mr Tudge said.

“Adelaide is already a fantastic city, but it has got so much potential in front of it.”

City deals — described by the federal government as a genuine partnership between the three levels of government and the community to work towards a shared vision for productive and liveable cities — have been struck in all other states of Australia.

Former Prime Minister Malcolm Turnbull created the City Deals program in 2015 to create better partnerships between all levels of government.

Users browsing this forum: No registered users and 8 guests