THE greatest gift Matthew Flinders bestowed on Kangaroo Island was its name.

A thousand latte-drinking marketing professionals could hold a year-long meeting and still not come up with a moniker that better conveys its uniquely Australian identity.

Throw the quaint towns, unique wildlife experiences and iconic natural beauty and KI should be literally chock-full of tourists from around the globe.

The sound of carolling magpies should be being drowned out by the sound of ringing cash registers. The job boards should be straining under the weight of the “workers wanted” adverts.

They should be, but they’re not.

Despite years of pushing Kangaroo Island as a must-see destination, the island has struggled to really live up to its potential.

There are plenty of people who have lived in Adelaide their whole life and never ventured across the Backstairs Passage. The ferry crossing is expensive, often rough, and too long for time-poor foreign tourists.

The flight over is on a small, prop-driven plane not favoured by international tourists.

But there’s change in the air down Kingscote way.

If you talk to Mayor Peter Clements he’ll tell you that Kangaroo Island is on the cusp of a great renaissance, and his enthusiasm is such that it’s very hard not to believe him.

The great KI revival, Mr Clements says, will be driven by an airport expansion set for completion next year. The $18 million project, which will see the runway extended and the terminal revamped, will allow 120-seat Cityflyer-type aircraft to fly straight into KI from Sydney and Melbourne.

The benefits, of course, would flow both ways – producers will soon have direct access to lucrative east coast markets. Diners in posh Sydney restaurants could be slurping oysters that had been sitting in the cool waters of Nepean Bay just that morning.

“The airlines are very keen,” Mr Clements says. “I can’t mention names but we have an airline which has said it’s ready to fly in before the upgrade is even completed.”

Mr Clements says the fact that the island will be serviced by Australia’s two big population hubs – and possibly directly from overseas in the future – will put the island firmly on the itineraries of overseas tourists who can’t squeeze two domestic flights or a trip on a ferry into their tight schedules.

“The Chinese are very time-poor when they holiday, and the ferry chews into that time,” he says. “Americans are the same. Now they’ll be able to fly straight in.”

While Mr Clements is excited by the possibilities the new runway will present, he has a strong message for anyone sitting on cheap land.

“All those people on the mainland who own blocks down here need to build houses right now!” he says.

“Build something on your blocks and rent them out – the rent will cover your mortgage payments.

“We are gearing up, but we’re nowhere near ready. We need more accommodation for a start. We have some of the cheapest real estate in Australia – this is bargain basement time, right now. I don’t know if we’ll even have enough builders to get everything done. There are so many opportunities here right now.”

A links golf course, a multiday walking trail, a major development at American River – these are some of projects Mr Clements is talking about that are either underway or in the pipeline on KI.

“The golf course will see 22,000 rounds of golf being played a year on what will be the most beautiful links course,” he says.

“Then you have the multi-day 66km Kangaroo Island Wilderness Trail that is set to be opening in late September and we’ve been talking with (federal member) Rebekha Sharkie about a five to 10-day bicycle trail around the whole island.

“Down on the Kingscote wharf precinct, Bickfords are looking at a craft brewery and a distillery, using all local resources. There would be a retail flow on from that.

“We’ve been left behind for so long, but now things are changing. This is good for everyone, and South Australia as a whole will benefit, and that’s the way we want it. Our hearts are in South Australia.”

Newly-elected Member for Mayo Rebekha Sharkie, whose electorate takes in the island, agrees KI is “on the verge of a renaissance” but says the cost of getting goods on an off the island was still too high.

“Kangaroo Island already punches well above its weight on a per capita basis … but freight is still the elephant in the room,” Ms Sharkie says.

“It can cost as much to get produce from KI to Adelaide as it does to get it from Adelaide to Hong Kong.”

Ms Sharkie said the idea of a bicycle trail around the whole island was a good one as it would encourage people to spend a longer time on KI.

“We need to encourage people to think beyond a day and a night on the island,” she said.

Kanagaroo Island Commissioner Wendy Campana says the airport upgrade would be a “game changer” for the island.

“We have been working with groups to help them understand what this growth could mean for their businesses,” says Ms Campana, who stepped into the newly-created position last year.

“They need to be ready for a 30 per cent increase in visitor numbers over the next three or four years, and that’s from the airport alone.

“I’ve been speaking with farmers who have kids coming back to the Island not for the lifestyle, but because they think they can make money now. It’s a really exciting time.”

IT’S a modern dilemma: exploring beautiful wilderness areas knowing there are noxious fumes coming out of your vehicle.

Visitors to Kangaroo Island, however, can now choose to do their touring emission free.

A small fleet of electric cars is available for hire, with charging ports located at the airport, Kingscote, Penneshaw, American River and Parndana, as well as the popular tourist sites of Emu Ridge and Raptor Domain.

“It costs about $12 to charge your car, and that gets you 150km,” mayor Peter Clements said.

“All the electricity is green electricity, none of it is from fossil fuels. People are bringing their electric cars over now that they know we have charging stations.

“We even had one businessman make a detour and come down in his Tesla just because we had the facilities needed to charge it.”

Kangaroo Island is a great place to visit, however what lets it down is the poor quality of many of its roads. Most visitors to the island arrive by ferry in their own conventional 2wd cars. Unfortunately, many attractions can only be reached via rough, corrugated unsealed roads. I recall visiting the island several years ago in a conventional hatchback. The car did not tolerate the island's roads too well, resulting in the car's suspension requiring servicing upon returning to Adelaide. This left a sour taste in my mouth, and made me unlikely to visit again, unless using a more rugged vehicle.
Top

I'm really happy to have seen KI before this renaissance happens.
Top

Must be the tallest development for KI.

Ben wrote:Must be the tallest development for KI.

Cape du Couedic Lighthouse is 25m tall, so this is probably only the tallest development if lighthouses are "infrastructure" instead.
Top

A multimillion-dollar luxury tourist resort on Kangaroo Island has been granted planning approval by the South Australian Government, which is predicting the project will create about 400 jobs.

The resort will be built at American River overlooking the ocean and includes a four-storey hotel, 10 seven-storey accommodation lodges, cabins, a restaurant, a spa and a swimming pool.

The Government said a condition of approval was for developer City and Central Consulting to begin work within two years and to have it completed within five years.

It said about 160 temporary jobs would be created during construction and a further 280 once the resort was operational.

"We are targeting high-end tourists from around the world and they love places like Kangaroo Island," Tourism Minister Leon Bignell said.

Conservationists have previously warned the project could damage the environment, but Kangaroo Island mayor Peter Clements said changes had been made to the project to mitigate their concerns.

"The ferry that was originally proposed in the plan is not part of the plan any more," he said.

He said the island needed more accommodation for holiday-makers.

"We are very, very pleased to see more accommodation on the island," he said.

"The council has been driving and supporting this project for the last couple of years since its inception."

The Government said the project would complement an $18 million upgrade to the local airport, and said it was still in talks with Qantas about organising direct flights to the island.

It said the cost of the project would be $35 million, including $22 million to for the development of the site and associated infrastructure.

SRW wrote:Ten 7-storey lodges? That sounds massive a project. Are there plans or renderings available?

SRW wrote:Ten 7-storey lodges? That sounds massive a project. Are there plans or renderings available?

Must be a typo ... 7 room lodges sounds more correct.
Top

Discovered this for Kingscote.

A small update of the upgrade of the Kingscote Airport. The main runway’s been extended and the terminals making good progress. Hopefully it shouldn’t be too far away. 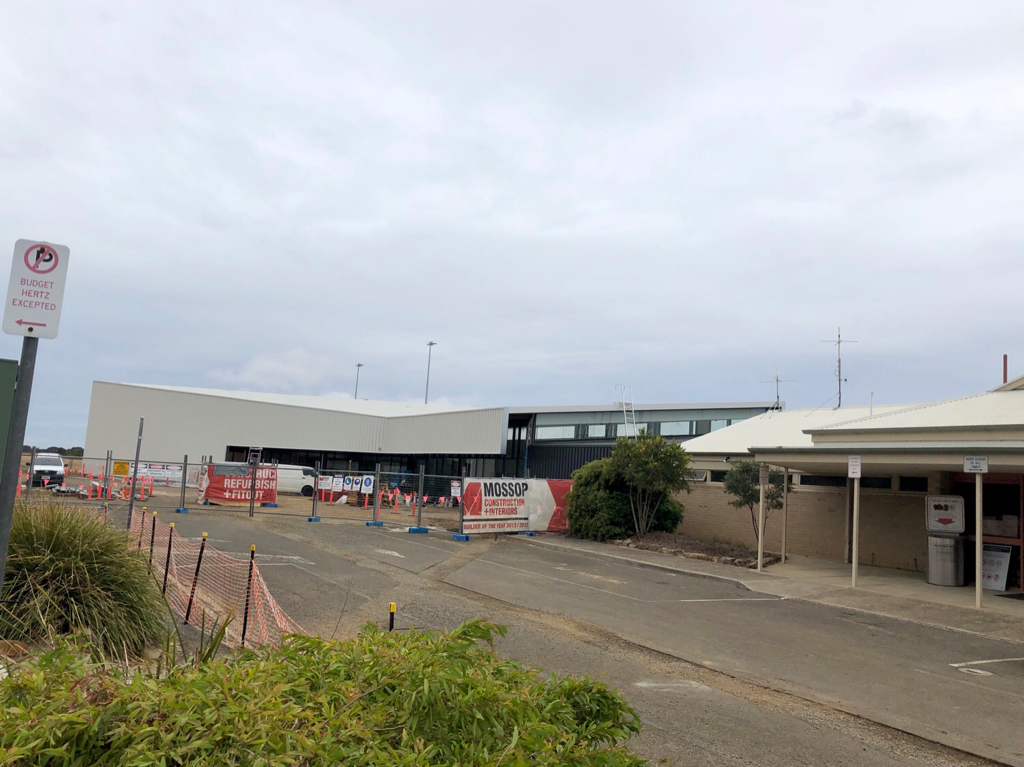 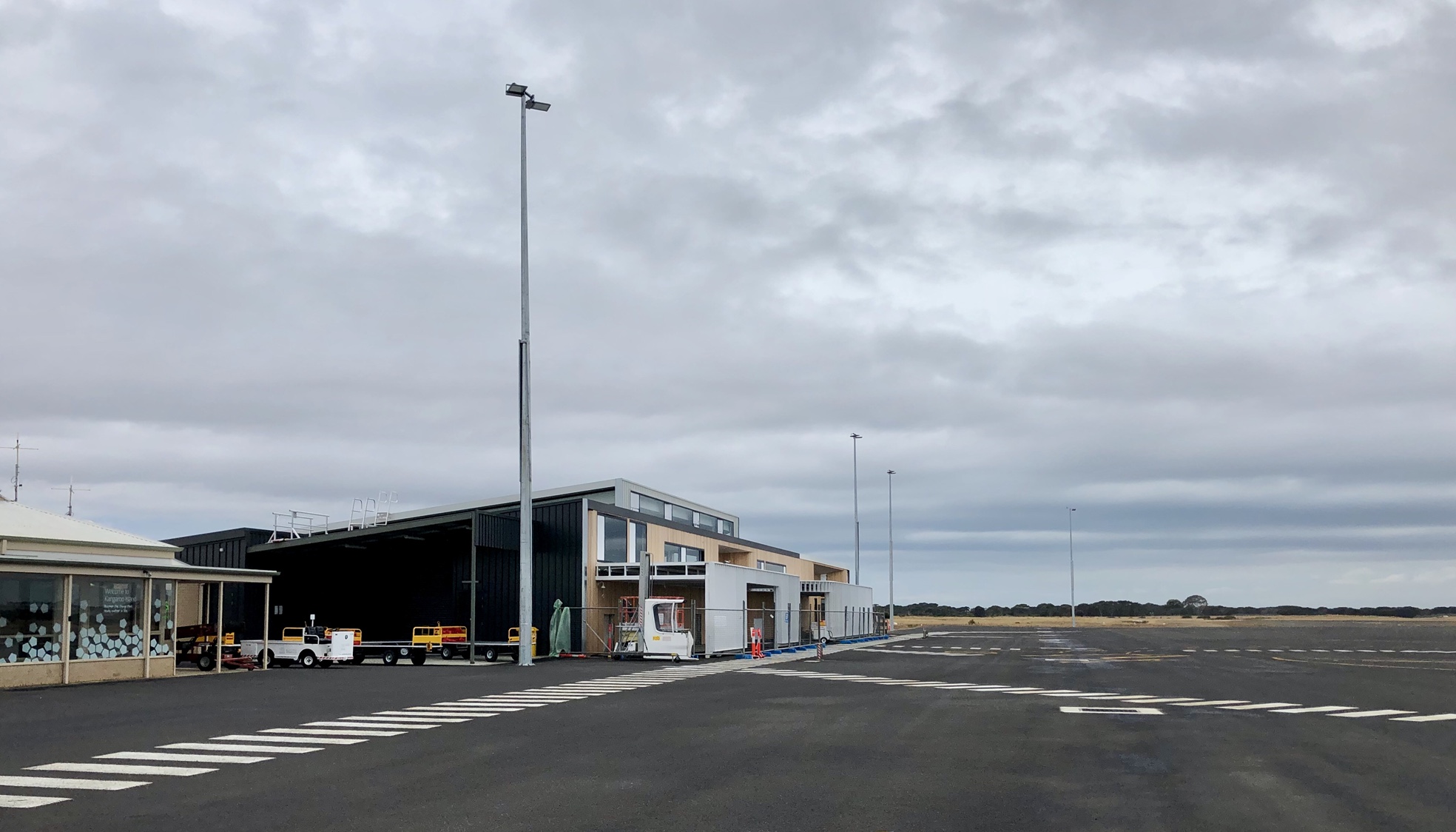 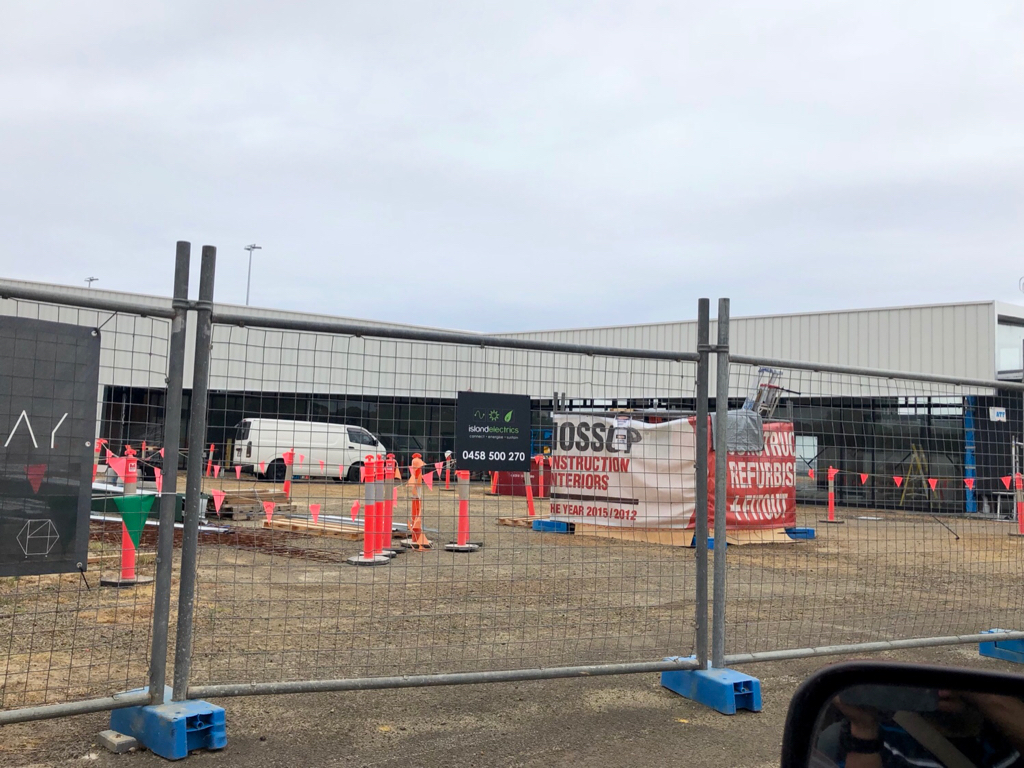 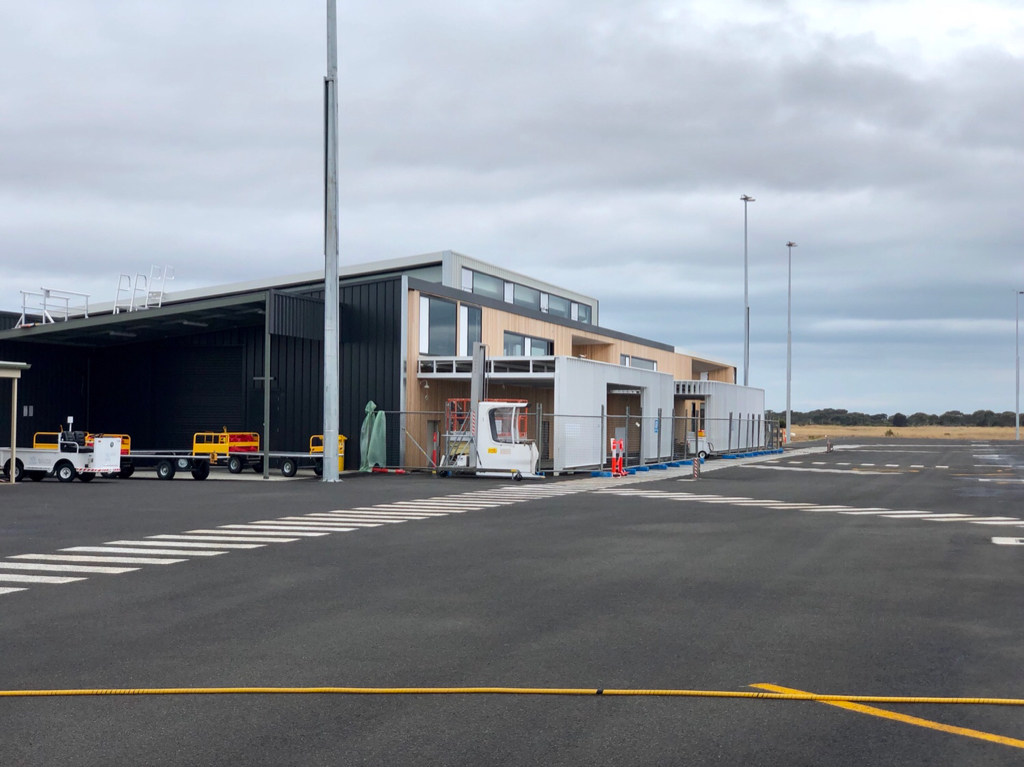 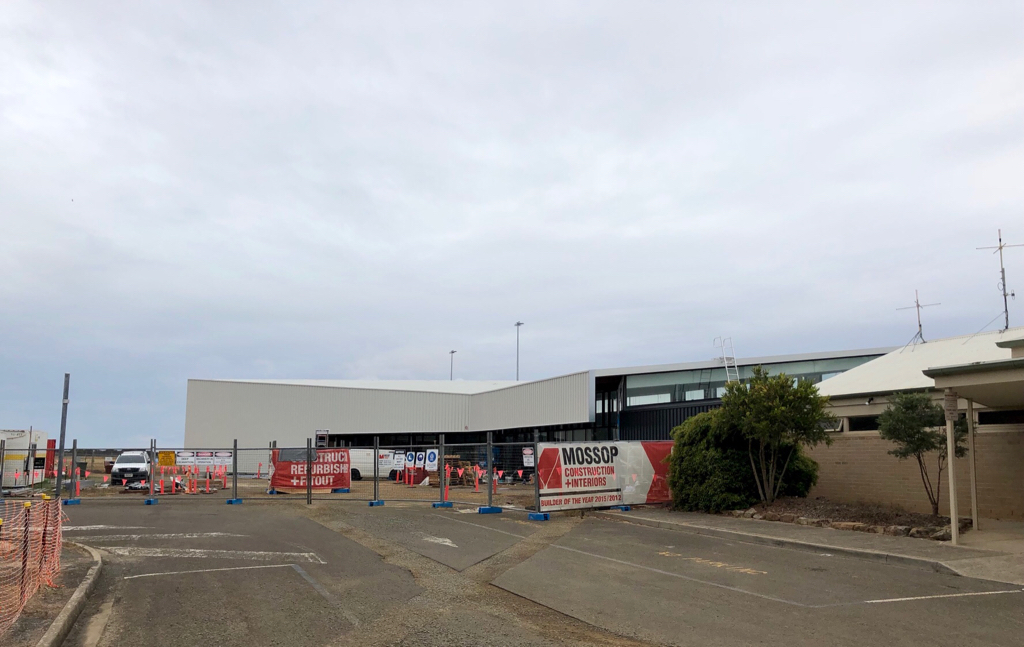 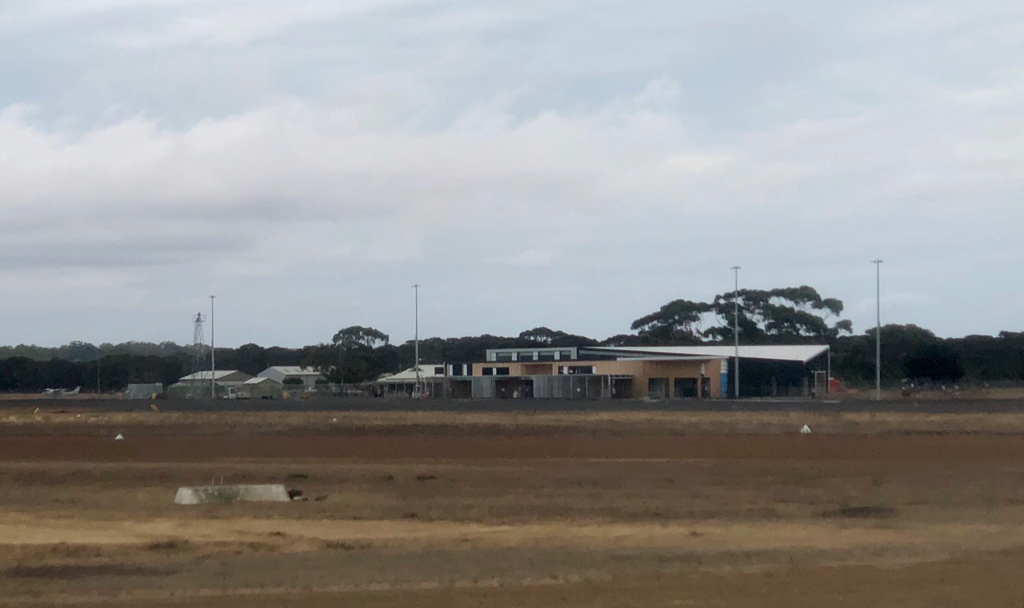 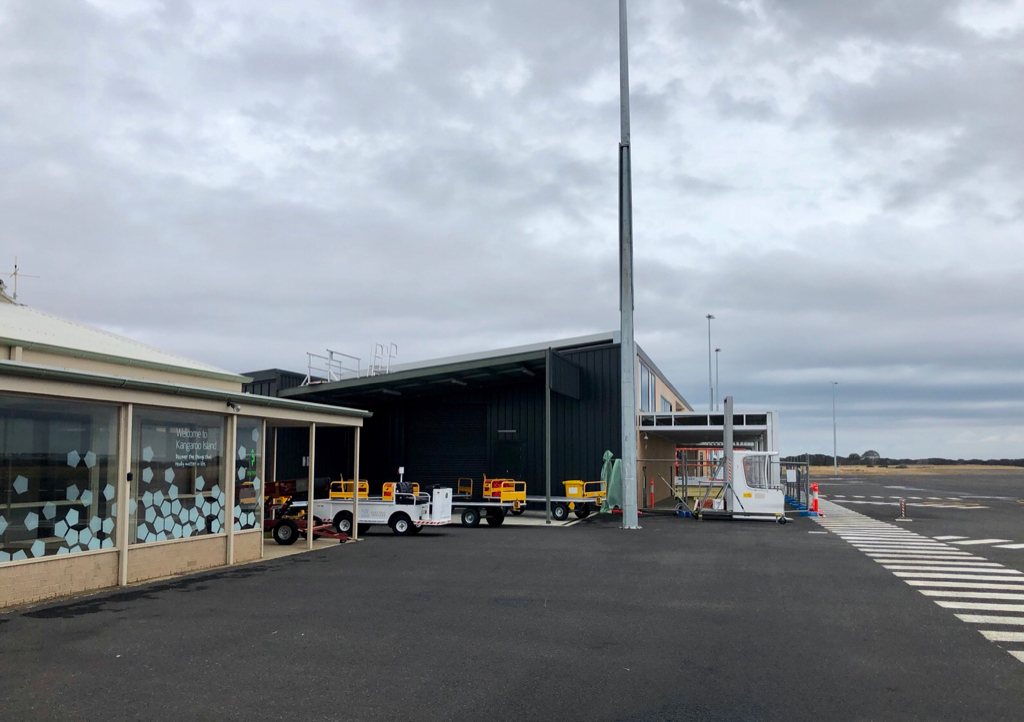 Sent from my iPhone using Tapatalk
"SA GOING ALL THE WAY".
Top

Sent from my SM-G955F using Tapatalk

The article says it "has raised the airport’s airside facilities to International Air Transport Association (IATA) Class C standards." I have tried to search but had no luck in trying to find out what type/size of planes this allows/refers to. Does anyone know which size of planes can now land there?
Top

how good is he wrote:The article says it "has raised the airport’s airside facilities to International Air Transport Association (IATA) Class C standards." I have tried to search but had no luck in trying to find out what type/size of planes this allows/refers to. Does anyone know which size of planes can now land there?

“This upgrade is the largest possible upgrade of these facilities and will allow 100-120 seat regional jets; 85 set turbo-prop Citiflyer type aircraft to establish direct flights between Sydney / Melbourne and Kangaroo Island”.