I wonder if they opened the Masters store in Mt.Gambier first so they could feed it from their Masters distribution network in Victoria (without having to open a distribution centre in SA just yet)
Top

The $18m combined federal and council-funded building will be constructed on the TAFE SA and UNISA site on Wireless Road West with a five-star green rating.

Prof Robinson said yesterday’s meeting gave the planning team an opportunity to look over the facility.

“It is about giving the key people involved with the project the chance to see the site, because for many of them this is the first time they will have seen it,” he said.

“They are looking at what we’ve got at present and where the new building is going to take place.”

Prof Robinson said he was pleased with the project’s progress, with completion expected in early 2016.

“We have got to adhere to a timetable that has been set by the Federal Government as part of the funding,” he said.

With the expansion set to go on TAFE SA-owned land, the university will also work closely with the training provider during the building process.

“The design work is starting now in conceptual terms, but designs will be emerging in a few months,” Mr Guida said.

“Drawings will me made and shared with the university, debates will take place and we will see a coherent design towards the end of the year.”

Mr Guida will work alongside architects from Russell and Yelland Architects and engineers from BESTEC.


He said his team would explore designs with more flexibility in the spaces and an engagement with the landscape.

The construction, which will start next year, will have the potential to employ local contractors.

Excellent - has been quiet down there in recent times.

BTW - would be VERY interested in the effect of Market place on the city CBD on Commercial St? Anyone know anything - I know such development have caused havoc on CBD businesses in other towns.
Jack.
Top

THE UniSA Mount Gambier campus will have the capacity to quadruple student numbers to almost 1000 and offer a wider range of courses in a $12.5 million expansion.

The project will improve facilities for nursing, social work and education students, while allowing for new courses that might include health, science, business and humanities degrees.

Contractor BADGE Constructions said the build would create the equivalent of up to 60 full-time jobs over next 12 months, spread among about 500 workers.

University staff numbers are also expected to grow significantly from the current 22.

Mount Gambier Mayor Andrew Lee said the development was a boon for the South East, which has been hit by structural changes to the forestry industry in recent years.

Mr Lee said it would encourage more young people to stay in the region, and attract students from neighbouring districts to live in Mount Gambier.

“The patient bedrooms and treatment rooms for nursing and midwifery teaching are modelled on the new Royal Adelaide Hospital and Mount Gambier Hospital, so those students will be learning in real world environments that will equip them well for when they enter the workforce,” he said.

Prof Lloyd said the 2500sq m building on Wireless Rd would triple the footprint of the current campus an would be “a great way to celebrate UniSA’s upcoming 25th anniversary” when it opens in February next year.

Students at the university’s James Morrison Academy of Music, set to launch in March in Mt Gambier’s Old Town Hall, will also have access to the Learning Centre.

The centre is part of the $22 million UniSA Regional Connections project, which includes delivery of high speed broadband to the Mount Gambier and Whyalla campuses.

Anyone know about the fate of Masters in MG.? (and the new shopping centre around it). All only just established.

skyliner wrote:Anyone know about the fate of Masters in MG.? (and the new shopping centre around it). All only just established.

It was announced during the week that Bunnings are closing their existing store in Mount Gambier and relocating to the former Masters store.

Conversion has started - will open soon.

The shopping centre will continue to trade as usual.
Top

A significant part of Mount Gambier's retail history is set to become the centrepiece of a new $35 million shopping complex in a boost for the region.
Development company GLG has announced plans to redevelop the site of the old Fidler & Webb department store in Mount Gambier's main street, moving in German supermarket giants Aldi, revamping the existing Target, and including a mall with 31 retail stores.
An entire city block, encompassing 24,000 square metres, will be revamped under the Development Application submitted to the Development Assessment Commission.
The complex will be called Fidler & Webb retail centre and designs will draw references from the original facade, in a nod to the site's history.

The original Fidler & Webb department store opened in the 1860s and was a huge success, offering a new style of retail shopping to the city and providing steady employment for many regional residents.
The company purchased the site in 2013, the same year the final tenants left, but the derelict building became a target for vandals and graffiti.
GLG Director, Campbell Blennerhassett said they were excited to announce the plans to redevelop a site that held historic significance to the city of Mount Gambier.
"Our priority is to deliver a highly strategic and transformative development that revitalises Mount Gambier's central township, while also activating Commercial Street East," Mr Blennerhassett said.
"We believe the project will create a key shopping destination for the Limestone Coast region, while providing employment and economic benefits significant to Mount Gambier, regional South Australia and the state as a whole."
Jobs boost
The proposed development is expected to provide a significant boost to local employment, providing an estimated 160 short-term jobs during the building phase and more than 250 jobs upon completion.
The project, set to revitalise the city's main street, is the largest retail project for the city since the $80 million Marketplace shopping complex opened in the city's north in 2012.

The complex has been plagued by vacant shopfronts throughout five years of operation and many residents have queried whether or not the city of 26,000 residents can sustain three large shopping precincts.
But many residents were delighted that Aldi was finally coming to town.
This week's announcement has put to rest years of discussions as to whether or not the discount supermarket chain would open a store in the city.
Local resident Diane Bailey-Stuart said she drives over the border to Portland and Hamilton, to shop at the supermarket so is pleased to have one so close to home.
"Mount Gambier is getting a revival, I'm feeling very positive about it," she said.
Shop-owners near the site said they were excited at the prospect of more foot traffic being attracted to the east end of Commercial Street.
Wendy Richardson has owned Red Gum Country, a clothes store across the road from the site, for 25 years and said she has spent the last few looking across at a derelict site.
"I mean who wants to walk past an empty building?" she said.
"There's been a lot of people going over the border... so this will mean all those shoppers are staying here in Mount Gambier."
Some residents have raised concerns about whether the city will be able to support three shopping centres but Ms Richardson was positive about the new development.
"I think businesses and empty shops will fill up as it will attract more people to the CBD," Ms Richardson said.
Ms Bailey-Stuart believed the speciality stores may attract shoppers from smaller towns around the region.
"I would love to think that Mount Gambier would blossom to fill that (development) so I'm very positive," she said.
Work will commence later this year with the precinct expected to be open for business by the end of 2018.

Makes you wonder what has happened to MG to have people going over the border to shop. Nearest city of any size, Warrnambool (around 32000), is some distance away - much petrol cost. Portland is only about 10000 as is Hamilton - neither of which should have the pull of MG.

Even in the 1950's, MG had a shopping centre 1 Km long - almost all with awnings due to the constantly wet weather - so something has happened to the city. I would have thought the business/shopping area was stronger than it appears.Possibly the decentralization of Commercial St, thus spreading out the amount of customers is partly of the cause. Interesting.


I remember the Fidler and Webb store - a grand imposing place of the old department store style. Pity it ended up derelict and unused.

skyliner wrote:Makes you wonder what has happened to MG to have people going over the border to shop. Nearest city of any size, Warrnambool (around 32000), is some distance away - much petrol cost. Portland is only about 10000 as is Hamilton - neither of which should have the pull of MG.

The only reason customers went across the border, according to the article, is so they can shop at Aldi. Doesn't mean they went there every week though.
Top

Just got back from a weekend in Mount Gambier.
Was once again really impressed with Commercial Street on a Saturday.
Busy... foot traffic, road traffic, people out in force shopping, dining, it's great to see.
Has a really good vibe there and there seems to be a bit of money around too.

Just bought an investment property down there too.
Let's hope the future is bright for MG!
Sticking feathers up your butt does not make you a chicken
Top

Excellent to read that info Pistol. I come from MG (left 1961) and remember it like that every day. The place has an outstanding linear shopping and business area centre - I thought it had been mostly destroyed by the development on Penola Rd. I recently read it's ERP (estimated residential population) was over 29000 - but also found another reference to it being 26000 - i guess this difference is a reflection of the boundaries considered to get the info. The 29000 made it 50th in the overall list of Australia's biggest places.

Thanks for the info.
Jack.
Top

I compiled this list from the recent census data (2016). It's for contiguous rural, urban area populations.

It would be safe to say that the Encounter Coast (Victor Harbor, Port Elliot, Middleton, Goolwa, Hindmarsh Island) will surpass Mount Gambier's mantle as SA's largest urban area outside Adelaide, within the next 5 years. 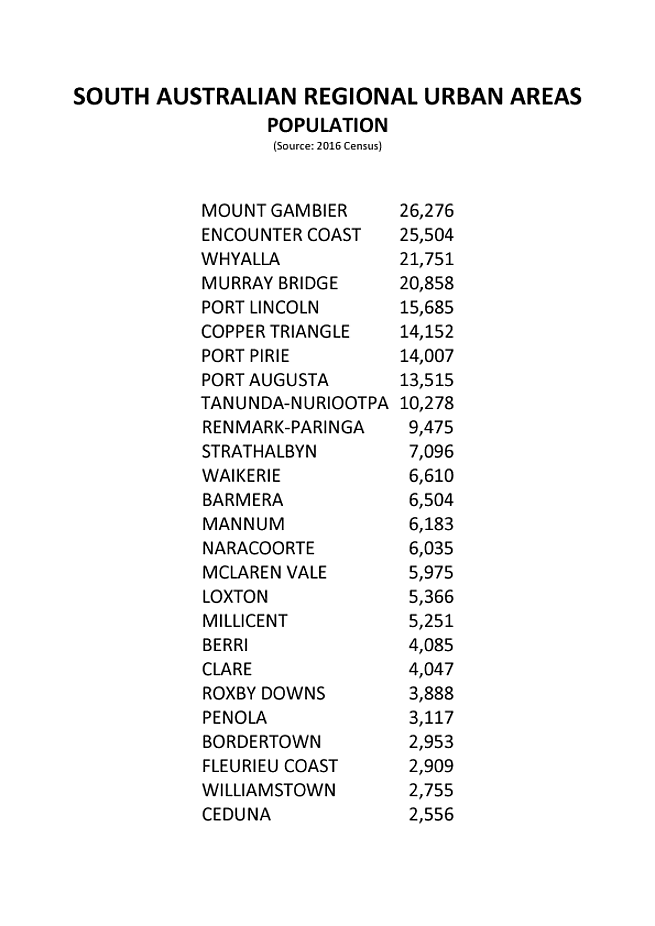 It's amazing that the population difference between the two largest cities in South Australia is 1.3million people versus 25,000. Surely no other state or territory.has Such a discrepancy.
Any views and opinions expressed are of my own, and do not reflect the views or opinions of any organisation of which I have an affiliation with.
Top
Post Reply
127 posts