All high-rise, low-rise and street developments in the Adelaide and North Adelaide areas.
Post Reply
125 posts

Looks like the reason for the height change is they're bumping one of the basement car parking levels up to above ground. So podium is now 3 levels instead of 2 (and it's no longer glazed above the ground level, since they're also removing the commercial space that was on level one — levels 2 & 3 will be 100% car parking).
Top

In this case, there will be almost zero perceptible difference in height, at the expense of more parking in the above ground lower levels.
Top

Here is the comparison from approved building to amended.

There is 14 levels including the ground floor. 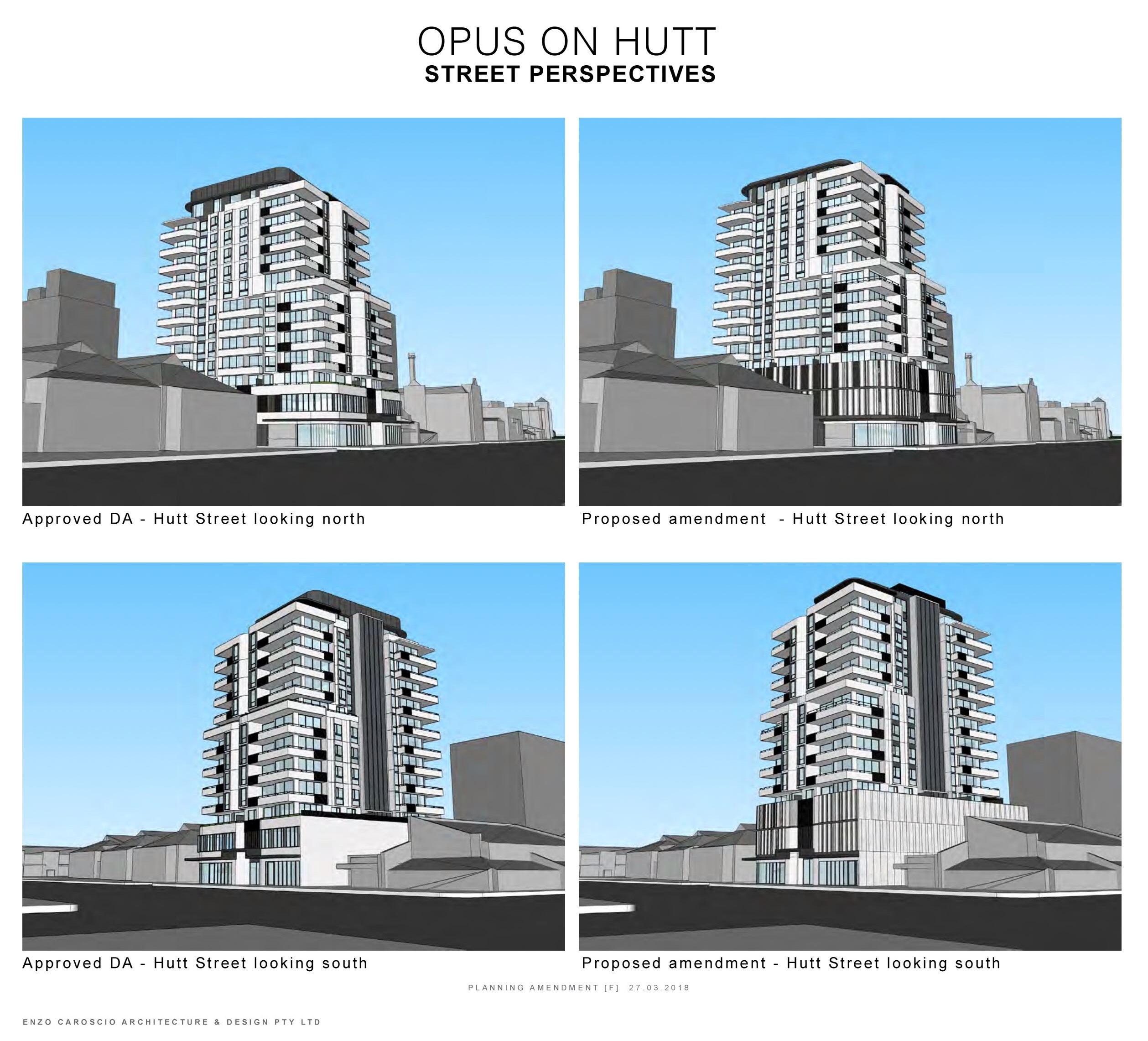 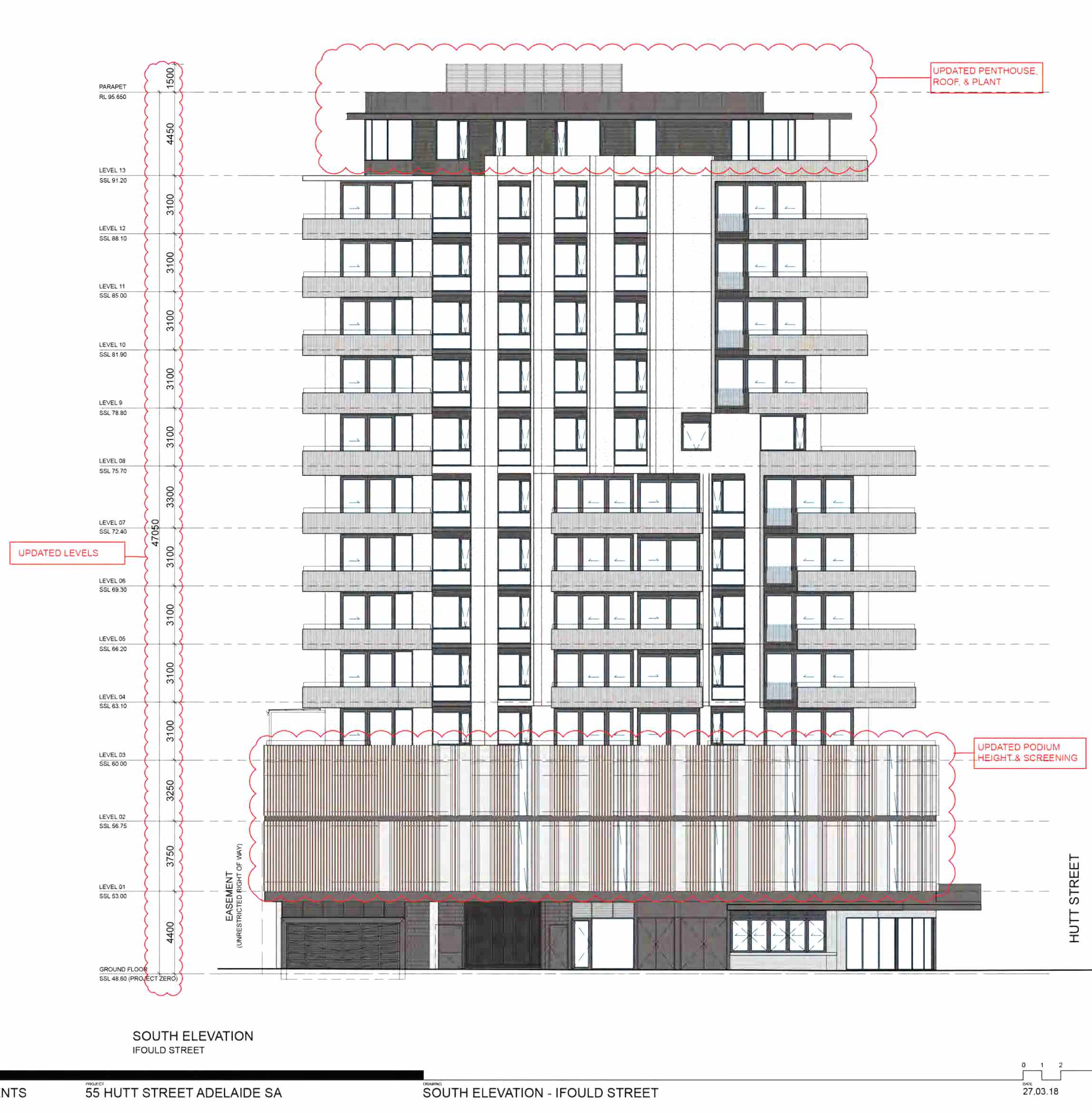 Does anyone have any ideas what is going on with this one. We have bought in to it and received an email over 3 wks ago that cassererly n Ouwens no longer dealing with it and Boscaini Commercial now is. Tried to ask casserley what does this now mean they have said ‘sorry ask Boscaini’. Tried asking this guy a couple of times said will get back to us then get an email that said ‘due to a loss in the family (his wife from the email)’ we will be back to you shortly’ 2 weeks ago - happened just after handed over to this company. My sympathies are with him however what do we do - who do we actually find out what’s going on?
Initially this was supposed to start last October, then we got the yep next month yep next month now we are in to June and supposing it was now held up due to the amendments the builder they have of choice wanted changes. I understand buying of the plan can sometimes not go ahead but the lack of communication and what we can do is driving me nuts. We chose this one over ones that have pools etc due to the space and that it was gonna be move in 2019 - now looks like we lucky by 2020.
Other concerns I have had is no opus website except for an Enquiries page now and no activity on FB for 3mths.
Thanks to anyone who give me some insight - I have built my last two homes but they were free standing so a bit new to how Off the plan is (just as frustrating though). And I know sunset clause comes around we get our deposit but we will lose all our incentives that we got

I would be asking if the construction finance has been approved (and with who). If not, what % of sales do they need (how many more apartments sales) to start? And what happens if they don’t achieve this/get finance approved? Also who is the builder chosen/appointed?
Btw, when does the sunset clause end?
Top

Thankyou for the response as that is great questions I can ask.they so far they have told us it’s 60% sales but I am not sure about the other details. The sunset clause is June 2020 which we are fine with as I have done a lot of research on here which has been great, and if it doesn’t go ahead we will get the deposit back. It’s the not being told anything that is frustrating us at the moment - and if it’s not going to happen we are missing out on other opportunities.
This too was our favourite as well and quiet a few incentives where thrown our way which made it a great deal too
Thankyou again I have been a lurker on this site for awhile and your info has been invaluable to us selecting an apartment and what goes with it

In your contract is the sunset clause when they have to start by or finish by? If it’s start by, it’s potentially up to another 2 years in limbo if they need to get more sales/ finance.
Top

Start by however we would pull out at this stage and look elsewhere ie an established apartment if they take that long - we are hoping though that the new amendments is what was holding it up as supposingly it was the builder they had chosen didn’t want to go two down with the basement....but that’s the last we heard from casserley n owuens.
Top

Try contacting the guys at Projected who are the agents looking after Adelaidean. It is their licence number on the Opus website now so they must have taken over the sales.
Top

Thankyou Adel aide great idea will try them during the week. Cheers
Also thanks how good is he and city watcher
Top
Post Reply
125 posts