All high-rise, low-rise and street developments in the Adelaide and North Adelaide areas.
Post Reply
692 posts

Yup, especially since Liberal governments have a stated policy of "Not picking winners".
Top

Ian Horne is possibly correct, but his opinion is based on intuition.

The reality is there aren't many similar examples to determine whether he will be correct.

He is correct about the frustration attached to the project. Time will tell if this becomes stigma; there certainly are many grudges held against the unaccountable SMA.
Our state, our city, our future.

Wasn't it a loan that the government gave them anyway?
Top

rev wrote:Wasn't it a loan that the government gave them anyway?

I thinking calling this picking winners is stretch too.

Sure SMA is unaccountable but it's still a good project and looking around the world it's worked in other places. So there is no reason why this won't.
Top

Slated open date is 25 September and will form a part of the State Government's bid to host the AFL GF.

This should be a significant advantage over WA and QLD.
Our state, our city, our future.

Here’s a big photo update as this has moved on significantly since my last photos at the end of July. I think aside from a few panels looking a bit too light IMO, this is looking really good. Maybe these panels will colour overtime too: 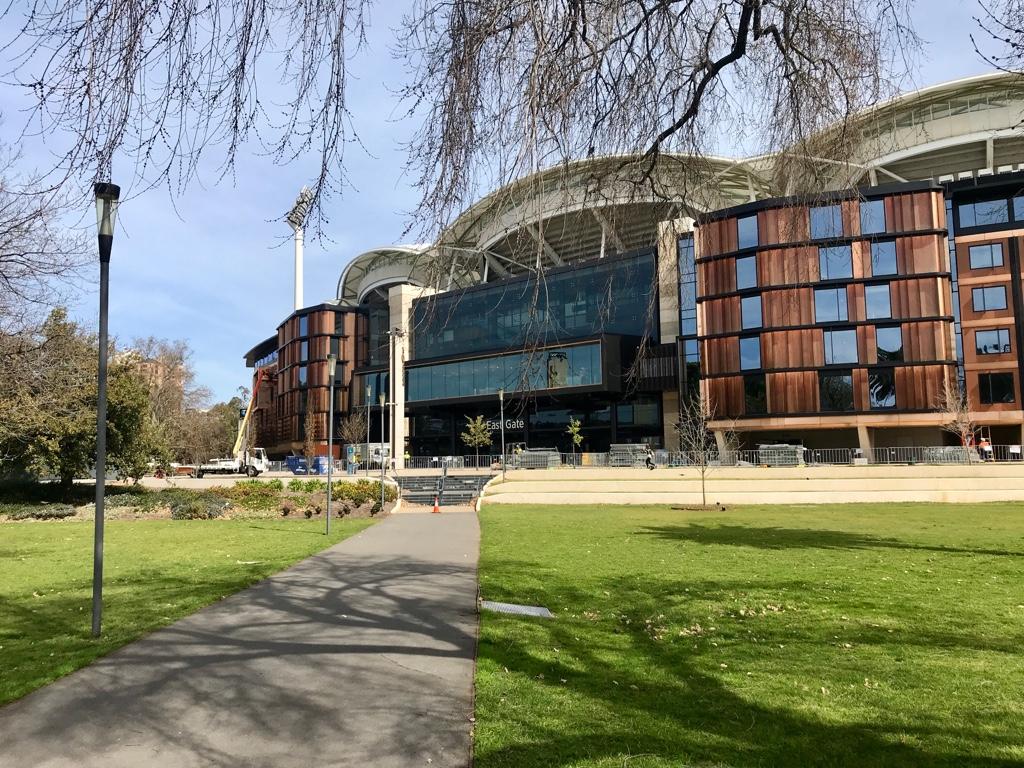 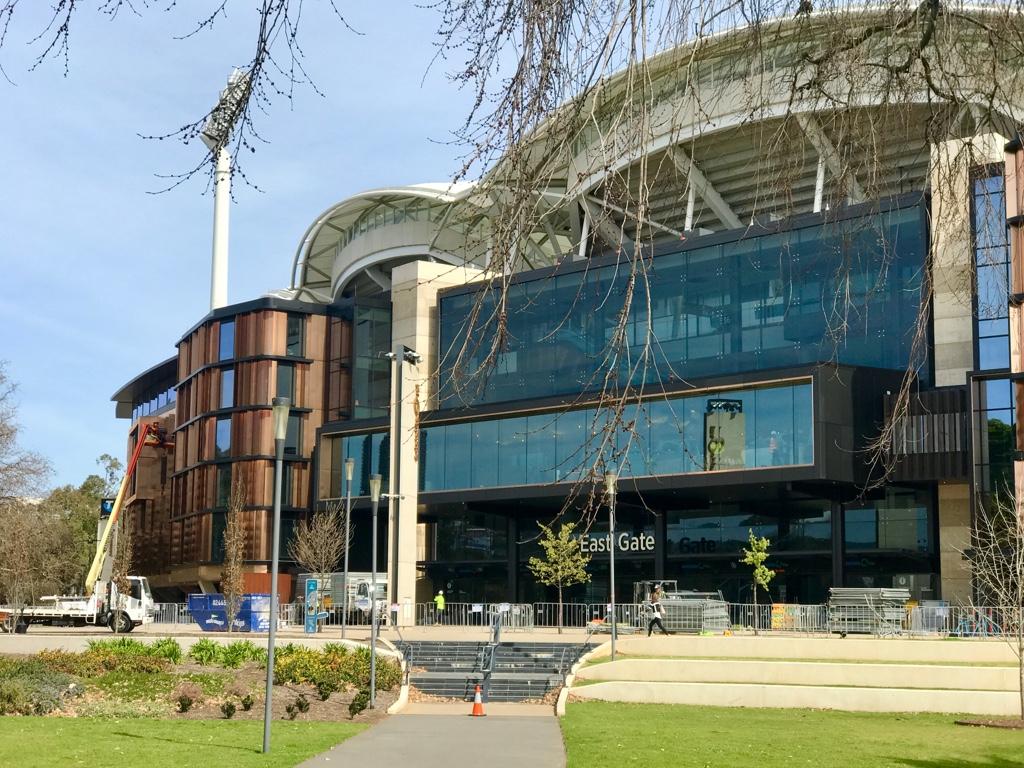 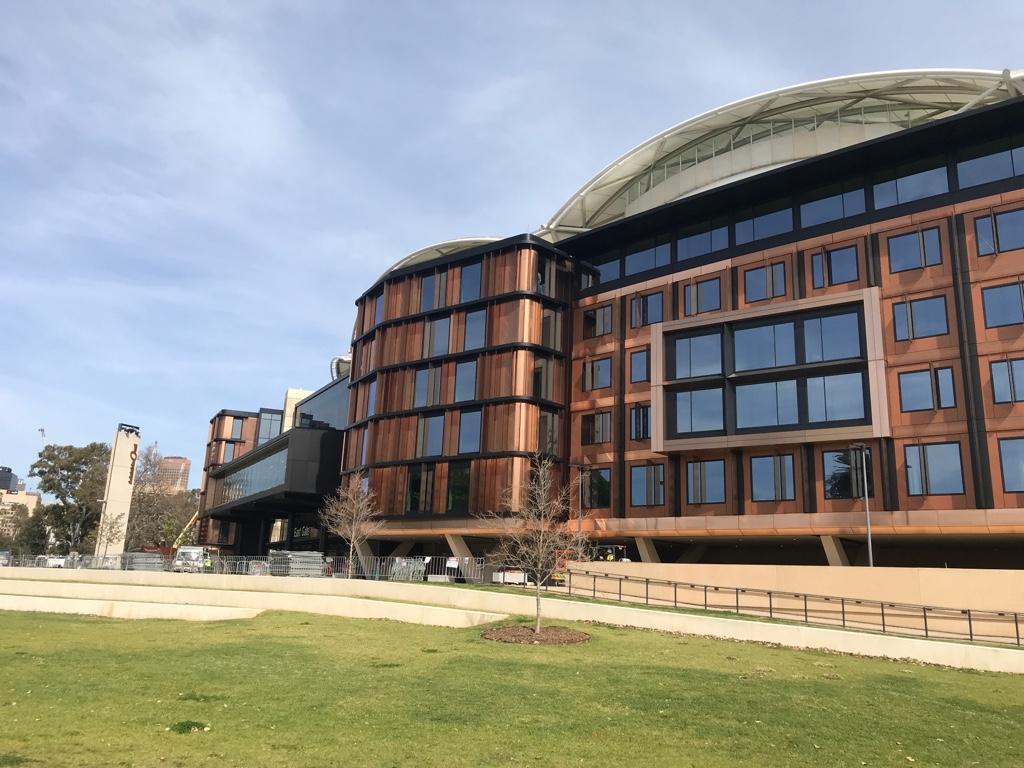 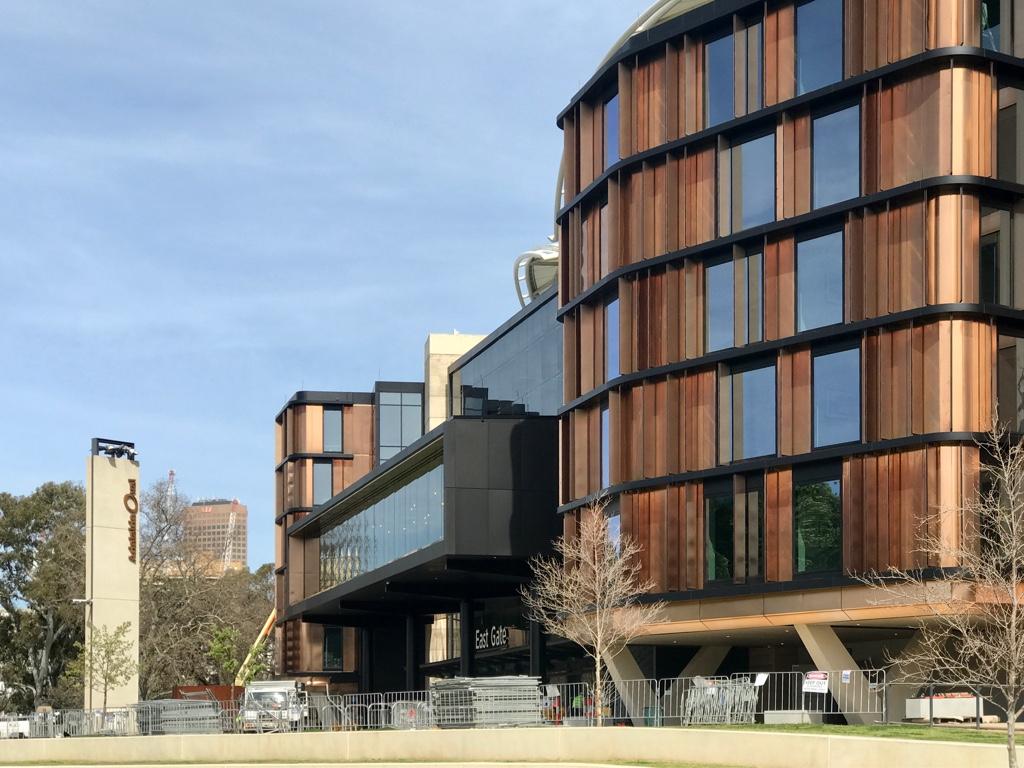 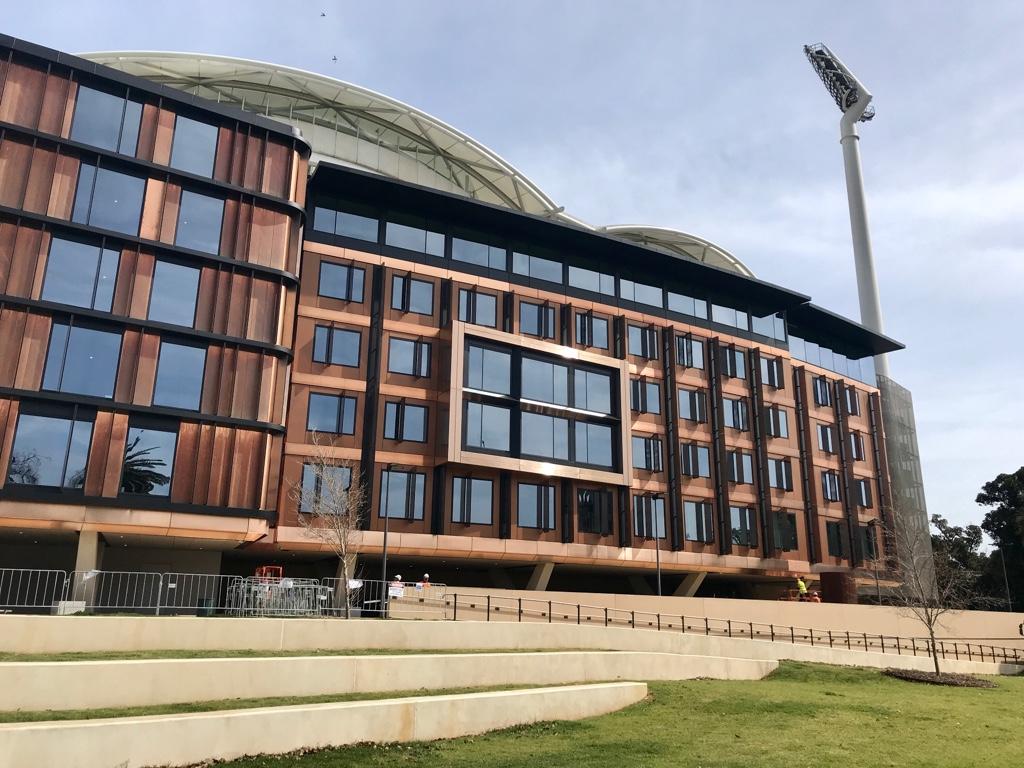 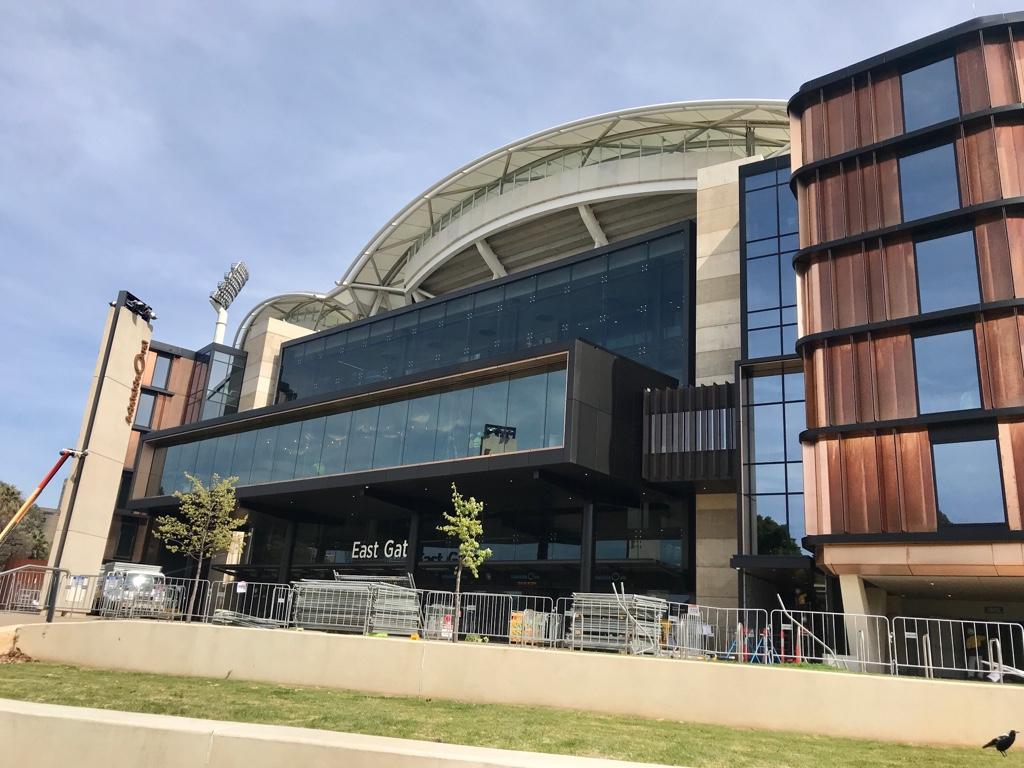 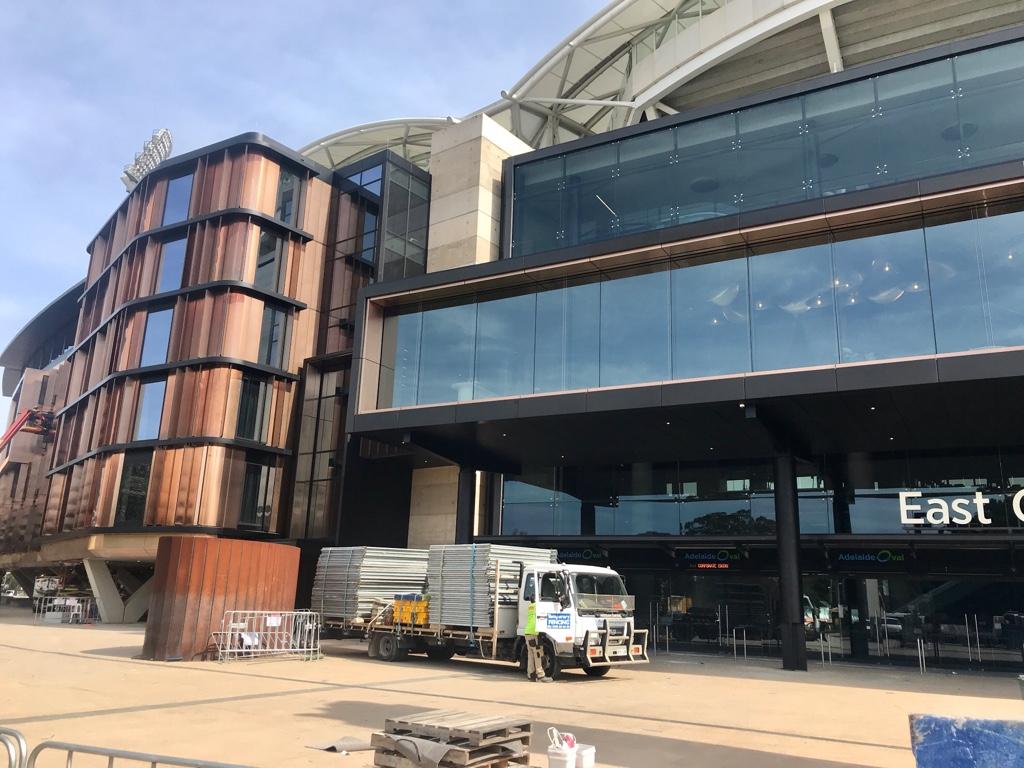 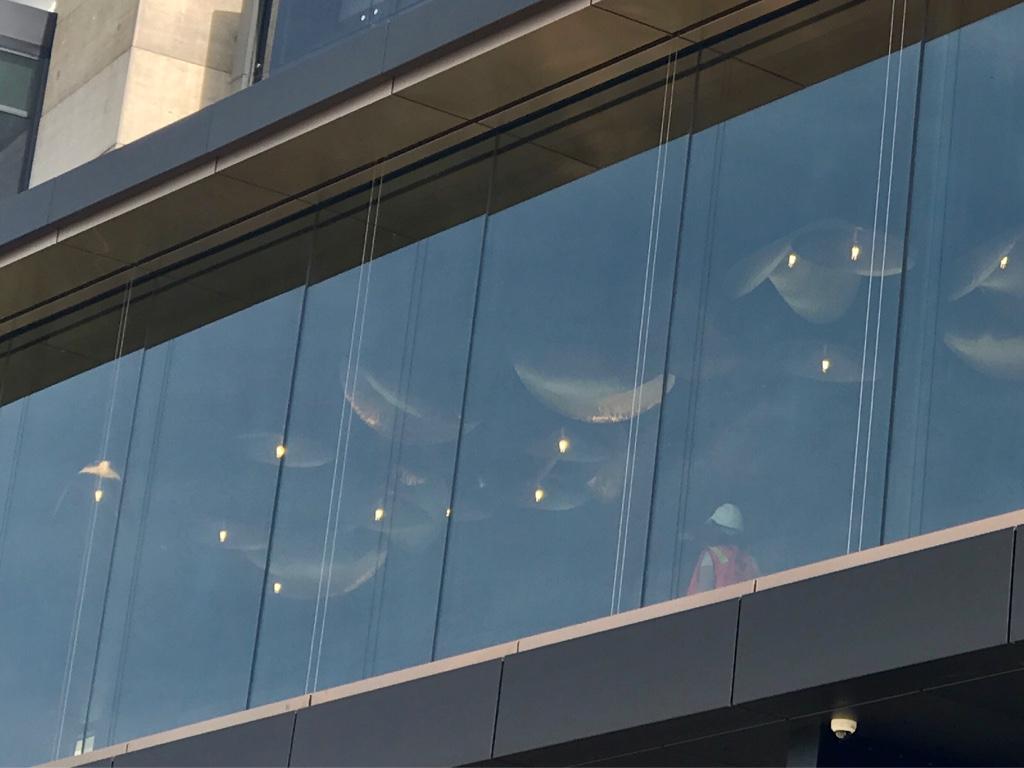 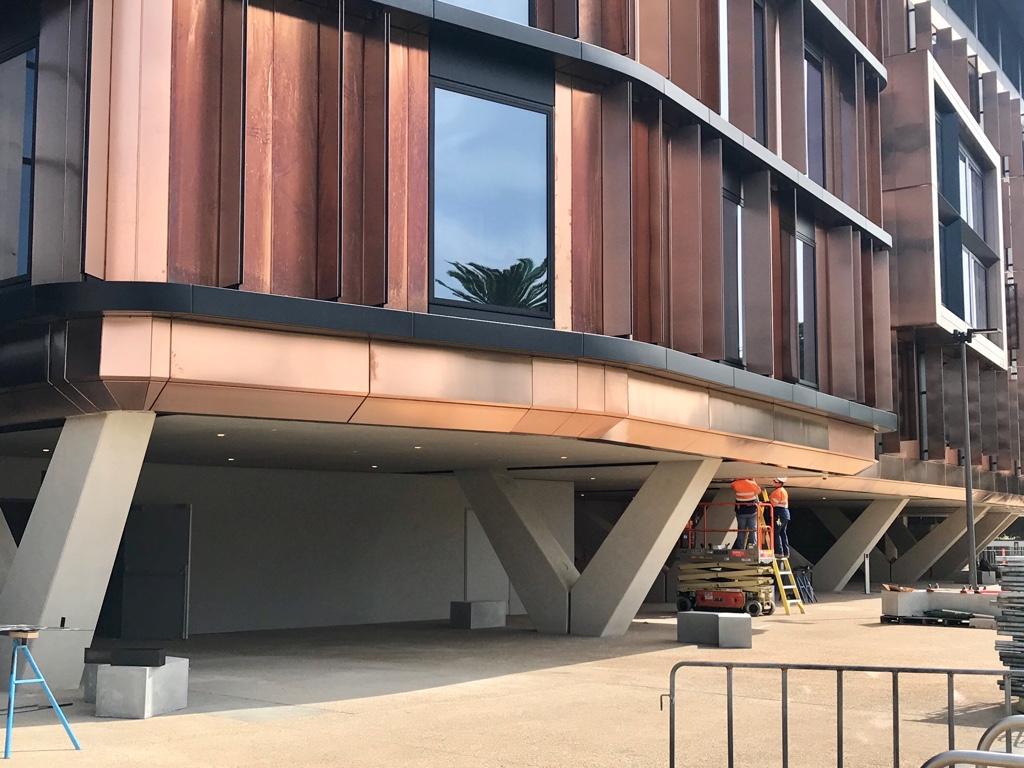 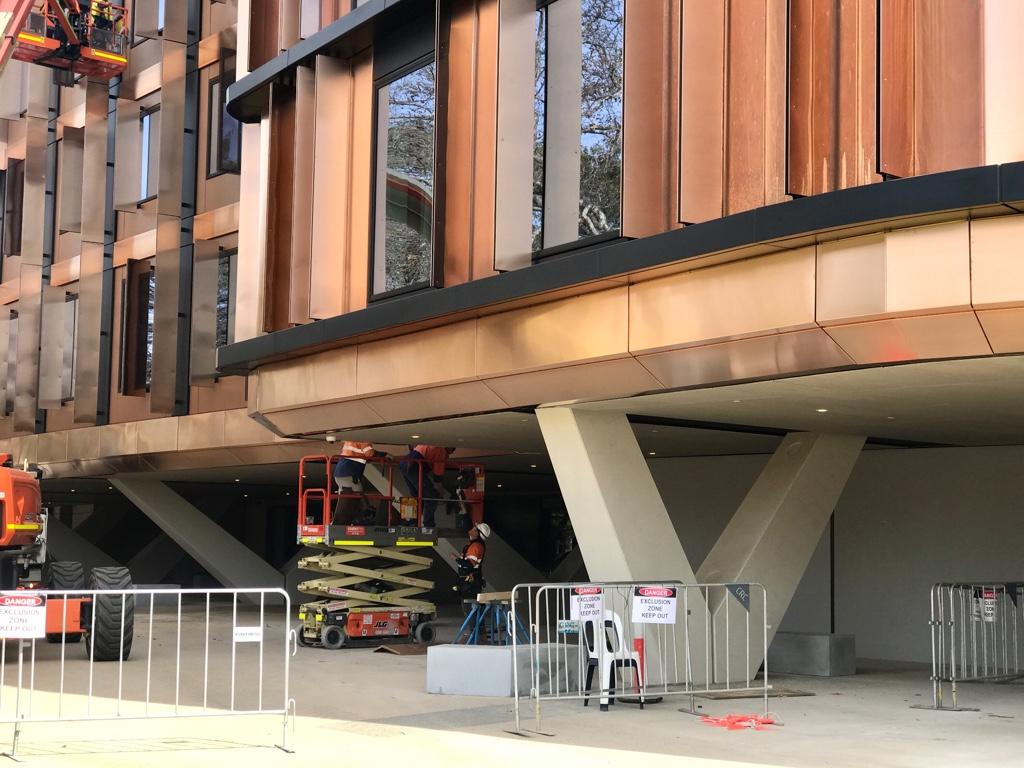 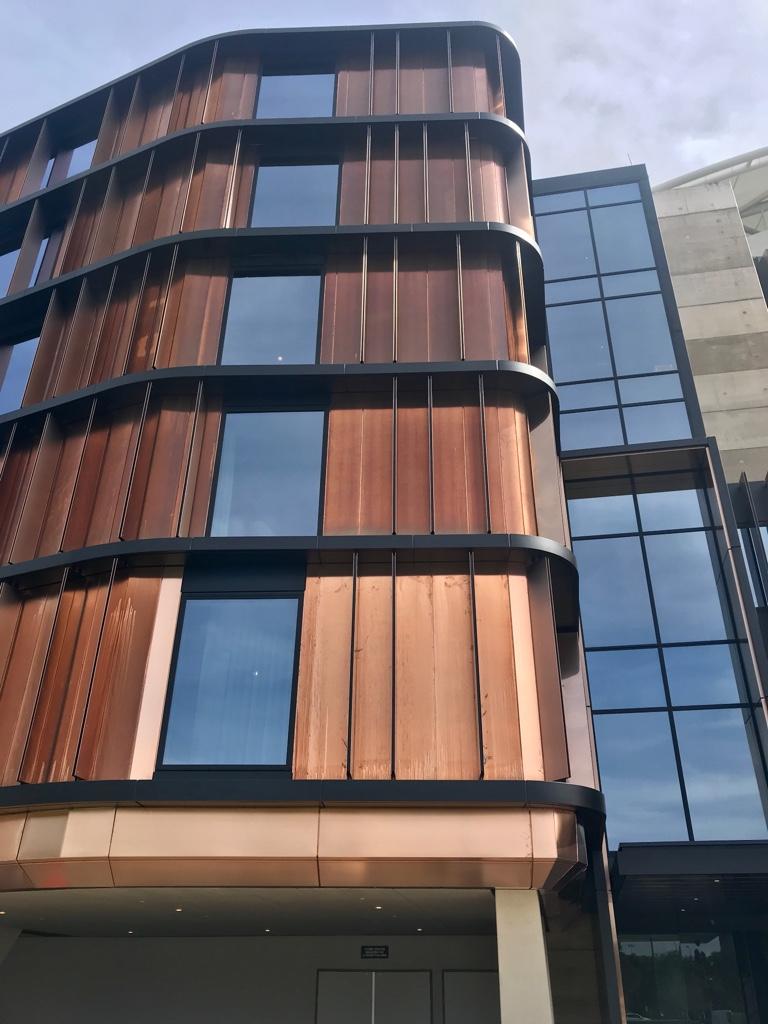 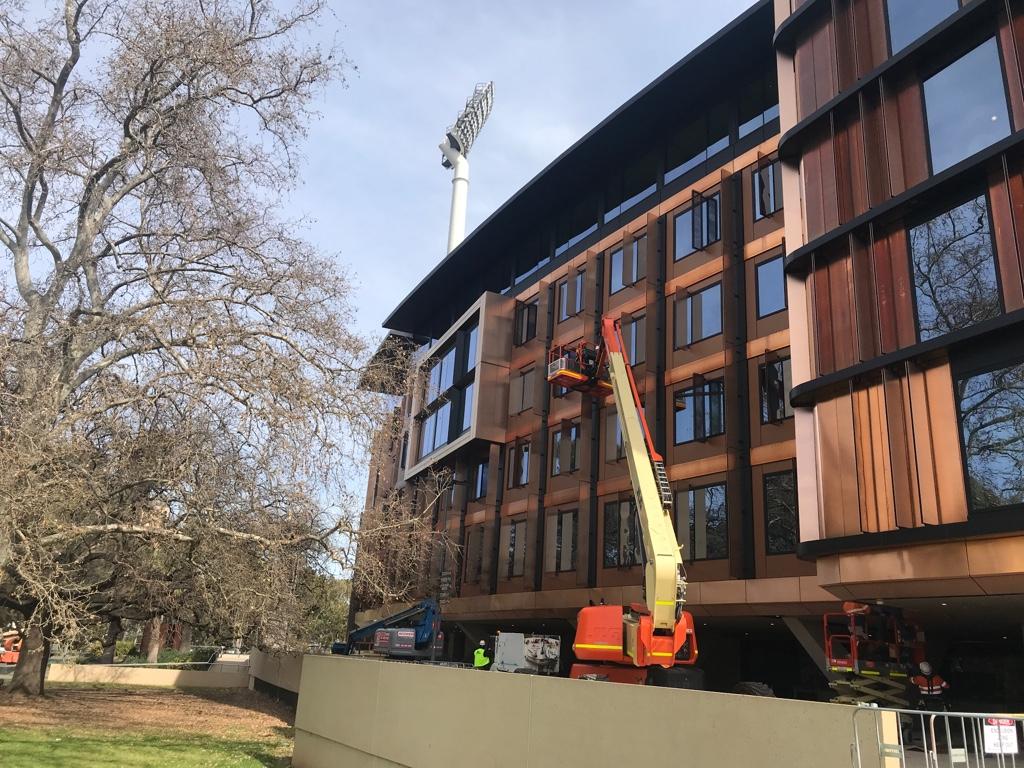 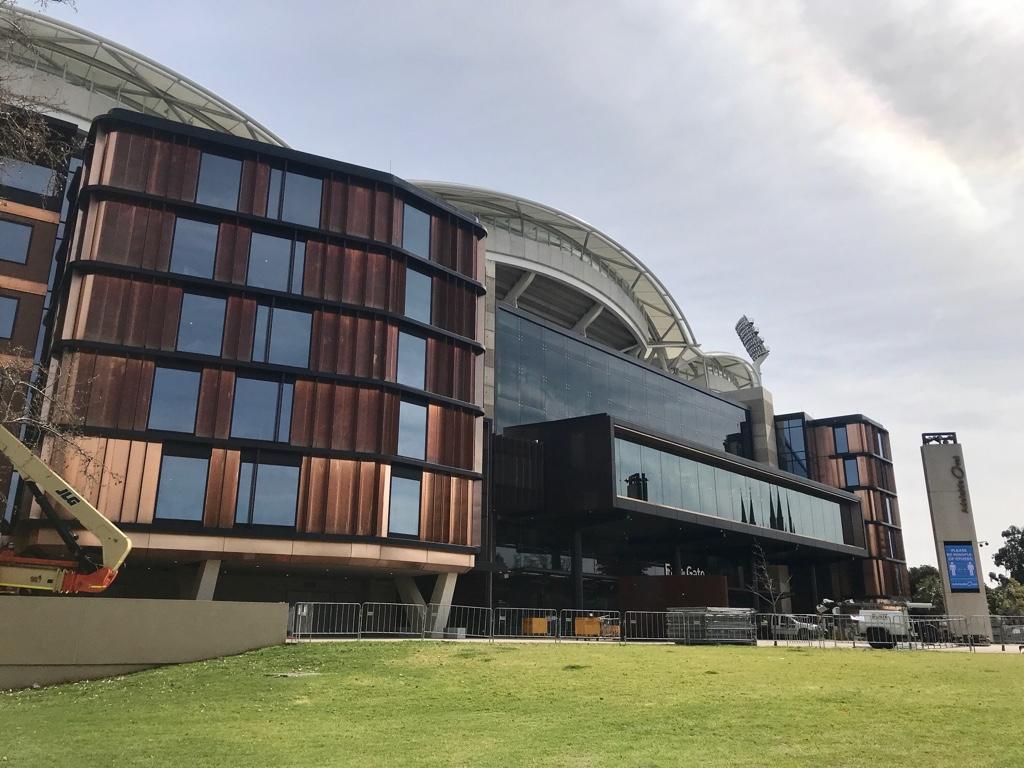 (Reflection of the Cathedral in the walkway above the East Gate) 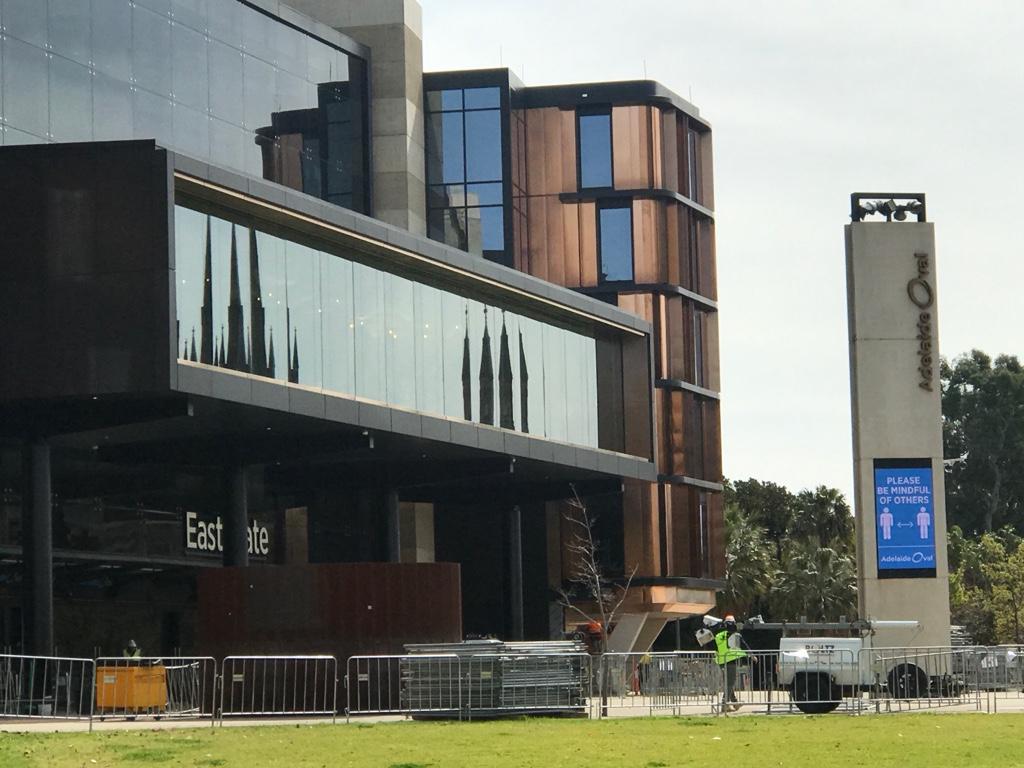 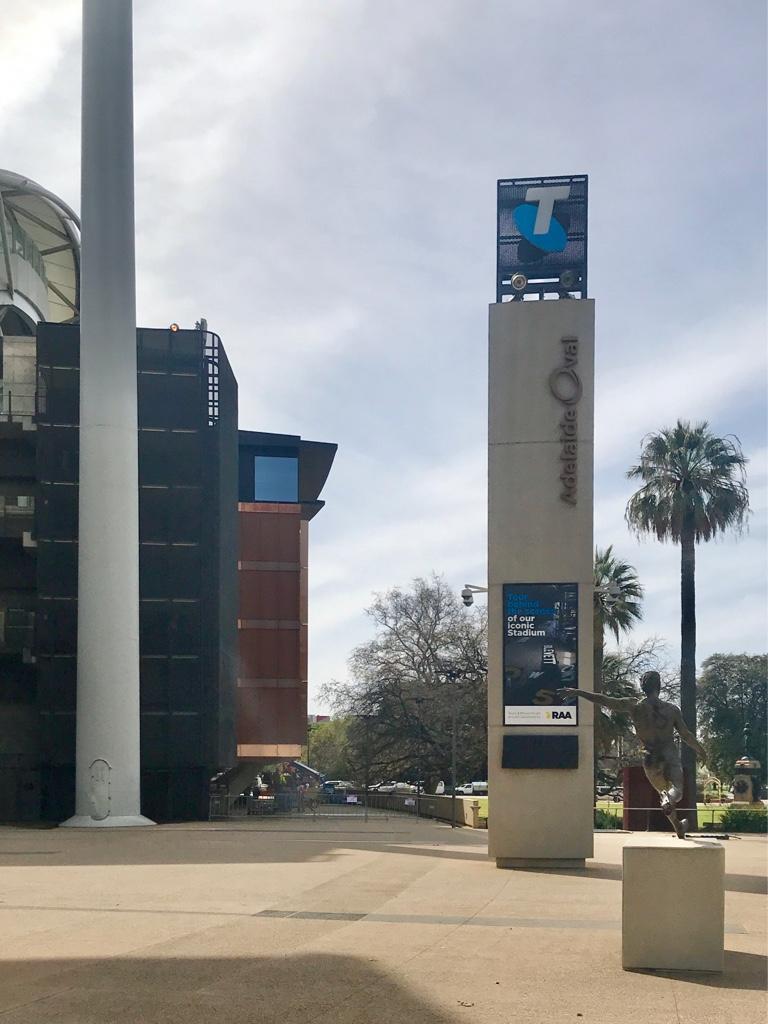 The parts of the hotel set into the stand look better (and glitzier) than I thought they would.

The walkway across the East Gate looks just as bad as the renders. It should have been set above.

Now that's there, I hope it helps bridge activity between the city and North Adelaide.
Keep Adelaide Weird
Top

Yeah this is turning out much better looking than I expected it to earlier in construction.
Top

If the South Australian government had allowed an AFL hub to be established in Adelaide (instead of letting the Qld government doing it) then the Grand Final would probably have come to Adelaide.

The Qld government saved the AFL season by allowing a hub to be established in that state......SA and WA were not interested, now Qld is reaping the rewards.

South Australia needs to look to the future and allow a big as crowd as possible for the NRL State of Origin 1 on November 4......allow lots of New South Welshmen and Queenslanders to fly in and spend lots of money over 2-3 days and (getting back on topic!) book out the new Adelaide Oval Hotel !
Top

I'll eat some of my words on this, as mentioned the bits that are set into the stand look quite good (probably because they don't follow the renders too closely) however the causeway over the East Stand entrance looks horrible, I'd have rather if they were going to bulge out over the entrance that they do it from the ground up and have function spaces on the upper levels above the Hotel foyer rather that it look like someone overfed the second level viagra.
Top

The State Government did not follow “specialist advice” on the rate of its Adelaide Oval Hotel loan because it “may not be commercially viable”, the Auditor-General has found, in a report warning the coronavirus pandemic’s ongoing impact on the stadium’s operations “may present a risk” to its ability to fulfil its loan obligations.

In a report into the development published today, Auditor-General Andrew Richardson reveals the Stadium Management Authority has written to the Government twice, expressing “concerns about its ability to earn income”.

The Authority has twice asked for “financial relief from its loan obligations”, after the Government agreed in 2018 to underwrite a $42 million loan – with the request knocked back on both occasions by Treasurer Rob Lucas.

“[The SMA] also noted that under the contractual arrangements in place for the Adelaide Oval, deficits it incurs are required to be covered by SACA and the SANFL, but given the financial impact of the pandemic their capacity to fund [their] operations may be reduced,” the report notes.
Advertisement

Richardson concluded that “we have not identified anything… that indicates the public money made available for the purpose of and in connection with the Adelaide Oval Hotel development was not managed and used properly and efficiently”.

However, he noted the state Financing Authority initially “provided advice on the loan arrangements to the SA Government”, indicating “a preference for the loan to be provided at a rate equivalent to a commercial rate of between 5 per cent and 5.5 per cent per annum if a loan was to be supported by the SA Government”.

“We note that the loan was provided at a lower rate of 4.5 per cent per annum,” Richardson said.

“We found that agency documentation was not maintained explaining the reasons for not using the commercial rate as advised by SAFA or analysing any potential risks introduced by adopting the lower lending rate.

“For future proposal evaluations, we recommend the SA Government document the basis for not following specialist advice provided by agencies.”

In a published response, SAFA told the Auditor-General that at the time, “in its view, [the loan] could not be funded commercially at 4.5 per cent without an equity contribution in the order of at least 30 per cent”.

“SAFA noted that the project may not be commercially viable with a financing cost above 4.5 per cent,” it said.

“Following consideration of that advice by the Treasurer, SAFA was asked to advise the impact on the State budget, particularly the net operating balance, should the loan be provided at the concessional rate of 4.5 per cent.”

Lucas welcomed the report’s conclusion, dismissing concern about the decision to offer the loan at a lower rate than advised by SAFA.

“I had advice from Treasury and others, and I took that particular [4.5 per cent] option,” he said, adding that the cost of funds at the time was 3.2 per cent.

“The Government thought it was a good project and we were prepared to support it,” he said.

“People are saying to us now, ‘you’re making too much money on the loan’, because the cost of funds is significantly less in the end…
Advertisement

The Auditor-General sounded a sombre note for future operations, saying: “The COVID‐19 pandemic has impacted [the SMA’s] ability to hold events and significantly reduced its ability to earn income.”

“The ongoing impact of COVID‐19 on SMA’s operating position is currently unknown due to the highly uncertain economic environment and may present a risk to it being able to fulfil its loan obligations.”

The report reveals the hotel cost is $45 million – $3m higher than the loan amount.

Richardson told the Government it should “consider performing regular financial health checks on the loan arrangements including an assessment of whether [the SMA] is able to service its debt, whether securities remain adequate to cover the loan amount in the event of default [and] any other risk exposures to the state”.

In a statement to InDaily, the SMA said it was “delighted the Hotel will open as planned on September 25th and we have had strong pre-bookings and growing national and international awareness about our unique offering”.

“While we note the Auditor-General has highlighted the economic risks posed to businesses by the pandemic, we are continually recalibrating and refining our business plans to ensure that all loan obligations will be fulfilled,” it said.

The loan agreement requires the SMA to provide quarterly reports on any major defects arising from the design and construction of the hotel, with “no material defects identified” as of June.

“As construction nears completion, the state should consider developing processes to get independent assurance that the project is delivered without any major defects and is fit for purpose,” Richardson writes.

“In particular, the State should give focus to ensuring all identified defects impacting existing infrastructure owned by the state are satisfactorily rectified.”

While Lucas has refused SMA’s requests to reduce its loan obligations, he did approve that interest on the loan “that would otherwise be payable during the construction period be deferred to 30 September 2020 and capitalised over the remaining life of the loan”.

The SA Financing Authority “advised us that the Treasurer has provided similar financial assistance to other borrowers with government loans experiencing financial difficulties due to COVID-19 and that these arrangements are similar to that being offered by commercial banks to businesses,” the report stated.


Shadow Treasurer Stephen Mullighan said there was “no justification for the Government to provide a loan at a lower rate than what the Treasury department advised”, calling the loan “a sweetheart deal from a Liberal Government to the Stadium Management Authority”.

“This report raises serious questions about the commercial viability of the hotel – if SAFA is telling the Government that the hotel isn’t viable with a commercial loan, why would the Government put taxpayers funds towards such a risky venture?” he said.

But Lucas argued if SMA were “having trouble servicing a 4.5 per cent loan, what would have been the position if it was 5.5 per cent?”

“The Government’s made a choice to try and get a project up,” he said.

“I’m advised it’s gone well in terms of its budget and timetable.”

Went for a walk past yesterday and in person it does overall look good. It's a shame that the plasticky looking orange panels seem to have their final finish though, the tarnished metallic parts look great.
Top

PeFe wrote: ↑
Wed Sep 02, 2020 3:42 pm
If the South Australian government had allowed an AFL hub to be established in Adelaide (instead of letting the Qld government doing it) then the Grand Final would probably have come to Adelaide.

The AFL did not want to establish a hub in Adelaide, they demanded open borders.

Neither Adelaide nor Perth were ever genuinely in the running to be the temporary grand final host. It had nothing to do with hubs or money, and everything to do with the decades long arm wrestle between the old VFL guard in AFL house, and the "interstate" clubs led, by the Eagles and Swans, over the de-victorianification of the AFL in general and a shift to rotating hosts for the grand final.
Top

Imagine with me, if you a will.... a very possible Grand Final between the Brisbane Lions and say, Richmond Tigers, in which Brisbane is victorious. Then i'd just sit back and watch/listen to the Richmond supporters having a whinge over an unfair home ground advantage for the GF