All high-rise, low-rise and street developments in the Adelaide and North Adelaide areas.
Post Reply
42 posts

Demolition is due to commence within weeks.
Top

I'm guessing this is the current design... 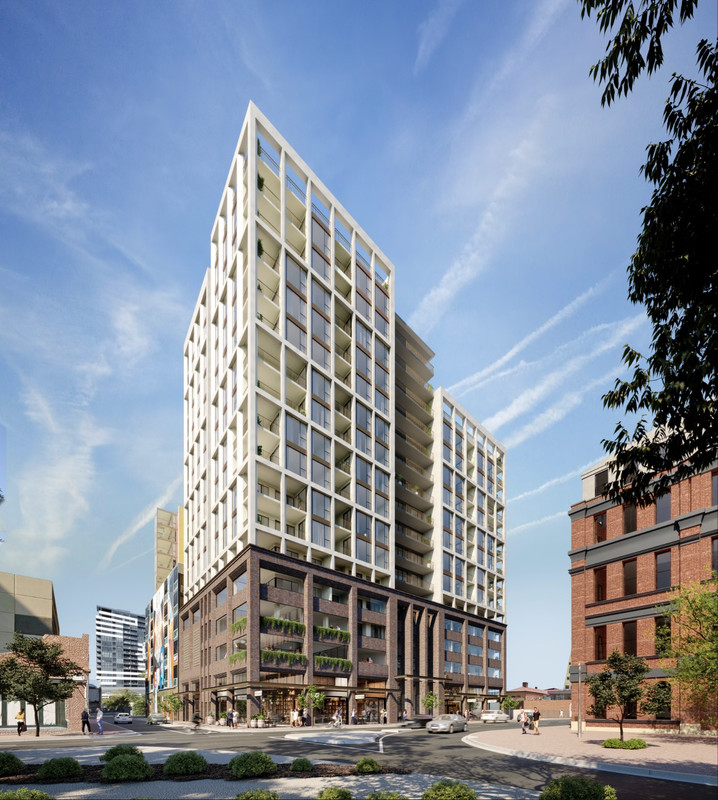 What a letdown on the previous design...
Top

The second design is inferior but still not bad. Simple and elegant. Plenty of other designs try harder and look like shite.
Top

InDaily has picked up on Ben's demolition news. Article here:

The only new information is that this will apparently be a staged development. Here's the most relevant bits:

Luk Investments was behind the $70 million Central Adelaide Apartment complex on Grote Street, which has 260 apartments and five commercial tenancies and was completed in 2017.

The Cullinan project manager John Ong told InDaily stage one of the new residential and retail developments would begin in November and consist of a 15-storey residential building, reaching about 45.5 metres.

He said work on the adjoining second tower of residential apartments was expected to start in February, with the 18-storey building reaching about 53 metres.

Does anyone have the dev app document for this?
Keep Adelaide Weird
Top

According to this, the original renders fit the description better than the most recent ones. 18 level and 15 level side by side.

"The Cullinan project manager John Ong told InDaily stage one of the new residential and retail developments would begin in November and consist of a 15-storey residential building, reaching about 45.5 metres.

He said work on the adjoining second tower of residential apartments was expected to start in February, with the 18-storey building reaching about 53 metres."
Top

From yesterdays online version of The Advertiser....

Adelaide CBD apartment atop The Cullinan development on Waymouth St set to sell for record $5.395m
A mansion atop a new twin-tower complex on the site of an iconic former music store in the CBD is poised to break SA real estate records.

A luxury three-storey mansion on the top levels of a soon-to-be-built residential complex in the heart of Adelaide is poised to set a new record as Adelaide’s most expensive apartment.

Agents are in the progress of closing a deal for the sale of the 634 sqm apartment, in new Waymouth Street development The Cullinan, for $5.395m. The property will include four bedrooms, including a 100sq m master bedroom, five bathrooms, heated flooring, a wine cellar, two kitchens, a rooftop terrace and private lift.

The sale would surpass the previous record of the South Australia’s most expensive apartment – set by a Realm Adelaide penthouse in Austin Street, which sold off-the-plan for $5.2m in 2018.

Construction of The Cullinan is expected to start early next year on the site formerly occupied for nearly 50 years by well-known retail store John Reynolds Music City.

Developer Luk Investments has received State Commission Assessment Panel permission to demolish the John Reynolds Music City building, which sold last year after the business fell on hard times and went in to administration in 2017.

The developers, also behind the $70 million Central Adelaide Apartments completed on Grote Street in 2017, plan to start the demolition next month, hope construction will finish by the end of 2022 and expect to create 133 full-time jobs during the project.

Project manager John Ong from Belle Property International Adelaide said construction of stage one of the complex, a 15-storey, 45.5-metre tower, would start in January or February. He expected stage two, an 18-storey and 53-metre tower, to start in May or June.

The towers’ ground and mezzanine floors will be set aside for retail outlets. A gym, communal open space, raised pool and conference room will be on level one of the second tower.

Mr Ong said a noodle shop, cafe and sandwich bar had already committed to opening in the retail area. He also expected to attract a sushi bar, wine cellar and convenience store and was hoping to attract other business, especially food and beverage outlets, to the retail space.

He said about 65 per cent of the stage-one tower’s residential apartments were already sold and the complex would have 202 apartments in all – 84 in the smaller tower and 118 in the large tower.

Prices start at $268,000 for studio-style apartments but the complex would also feature one-bedroom-plus-study, two-bedroom and three-bedroom options.

Mr Ong said location was one of the biggest selling points for both the residential and retail components of The Cullinan, and developers hoped the complex would help extend Waymouth Street’s popular dining precinct west to Light Square and beyond.

“Because it’s adjacent to Light Square, for anyone who purchases in the northeast corner of stage two, they will have an unblocked view (over the square) for the rest of their life,” he said.

“The new building will have an important influence and presence to one of the most important public open spaces in Adelaide,” the material says. “The design of the facade has been … reworked to respond to the site’s unique context.”

This the John Reynolds site ?