All high-rise, low-rise and street developments in the Adelaide and North Adelaide areas.
Post Reply
89 posts

HeapsGood
High Rise Poster!
Posts: 238
Joined: Mon May 10, 2010 10:54 am
Location: At the Adelaide Airport thankfully now not having to use a Dyson Airblade

Yeh I find it incredibly difficult to be excited about this idea.

Just finish the bloody south road highway already.
*Looks at Dyson Airblade Factory* "I say we take off and nuke the entire site from orbit, it's the only way to be sure"
Top

I'm pleased at least the idea of combining soccer with court sports has been nixed. A larger soccer stadium could be built instead on the Entertainment Centre site in the medium term. In this riverbank location, I would like to a see aquatic sports facility but I welcome the arena. Still hopeful that we'll see the rumoured plans for a concert hall and 'Elder Jewel' publicly proposed too. I know Labor's probably wanting to keep their power dry, but it'll be interesting to see if they'll compete with big ticket pledges.

I have to say, the design is rather elegant and civic. Makes me reflect on how the previous two Convention Centre expansions were missed opportunities to continue the lakeside pavilion or lightbox aesthetic of the original addition.
Last edited by SRW on Fri Mar 19, 2021 1:48 pm, edited 2 times in total.
Keep Adelaide Weird
Top

So the Advertiser got their facts wrong again with the 30,000 capacity claim, with the proposed capacity being 15,000 (which would be perfectly fine for Adelaide given most major arenas across the country have a similar capacity).

The renders so far look fantastic. Also, there may be some benefit having it connected to the Convention Centre in the proposed site.
Top 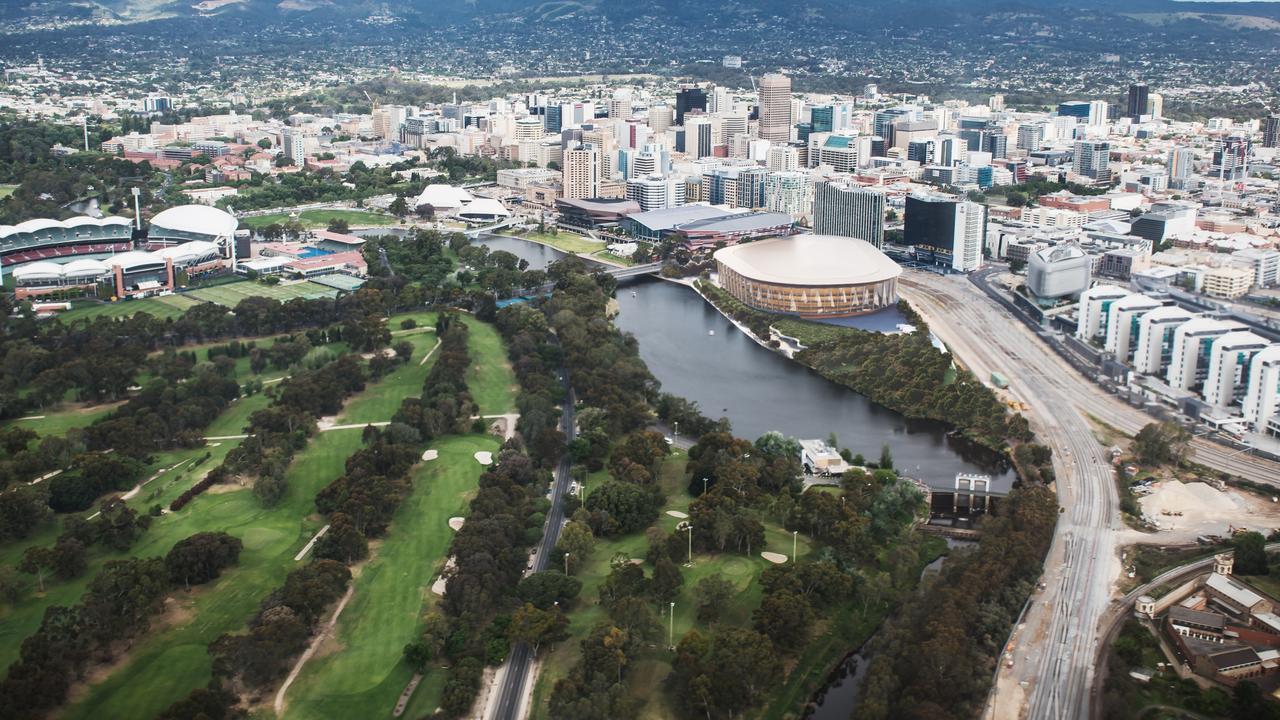 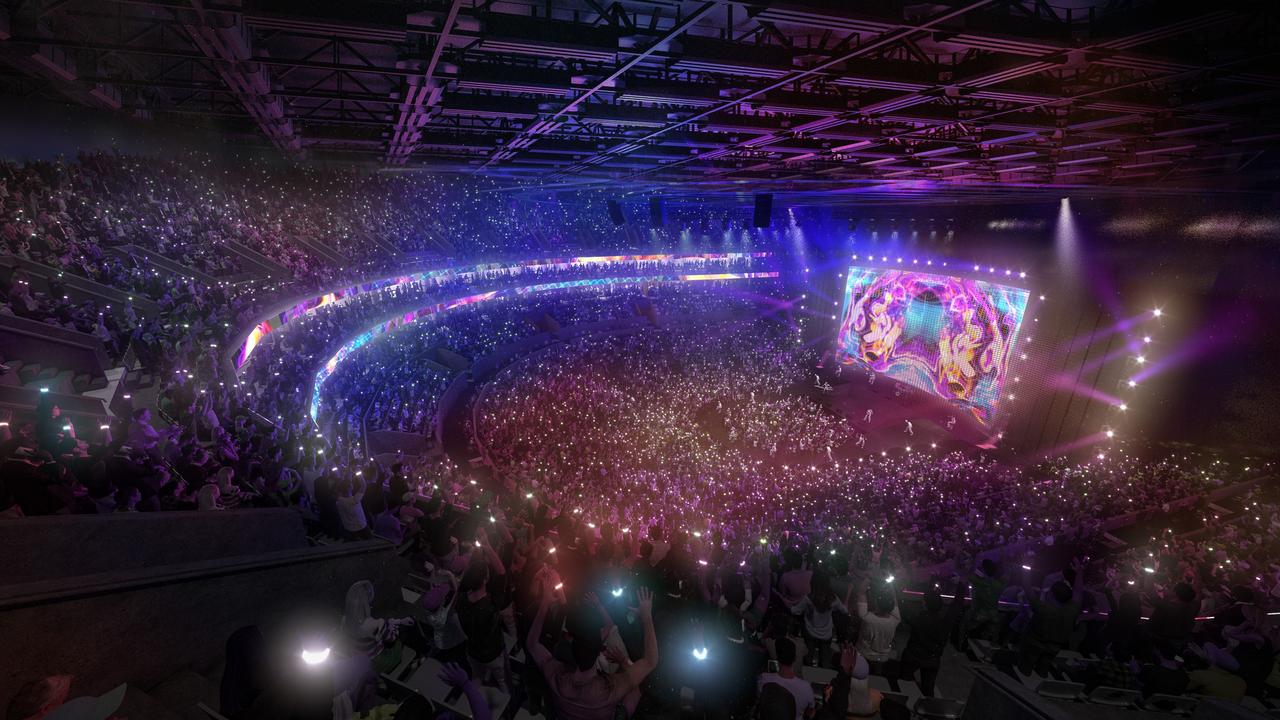 Plus some additional screen grabs from the video

In my opinion the stadium design is OK, it would be better if we had a coherent and organised pattern to our architecture particularly the two potential nearby stadiums.

However, what I now really don't support is a big open railyard not being covered by this new stadium. My main support originally was the subversion and hiding of the railyard in keeping with the pattern presently of convention centres etc. With a new stadium adjacent the yard it will be essentially impossible given the support structure size required for any substantial infrastructure to be built on top the yards anywhere between the stadium and the medical precinct buildings adjacent. The only suitable future proposal would be a pedestrian and bike friendly aerial garden atop similar to Seoullo-7017. Which could replace the current pathway along the Torrens if the stadium sits atop it.

Happy to hear what others think. Especially if the video renders aren't entirely true.
Top

Levesque wrote: ↑
Fri Mar 19, 2021 2:43 pm
However, what I now really don't support is a big open railyard not being covered by this new stadium. My main support originally was the subversion and hiding of the railyard in keeping with the pattern presently of convention centres etc.

I agree with this. On first glance, I didn't realise where this was being placed or how much space it would take up. It should be built over the railway to continue the ground plane from North Terrace to river front and allow space for other amenities (not least parklands).

I don't see how it's to be 'connected' to the Convention Centre when there's a gap of roughly 100 metres between them. Align it with Morphett Street.
Keep Adelaide Weird
Top

The proposal is for an underground tunnel to connect the two. Aesthetically building over the railway lines makes sense however I am guessing the engineering costs to cantilever it over and sound proof it from the noise/movement below would add significantly/prohibitively to the cost. I am curious about the potential public transport connections and if they would they could/would incorporate a train stop adjacent the arena for event days? Many comments I have read are saying the capacity should be more like double ie 30,000 to justify the $700m spend.
Top

A seperate train station would be silly, it's barely past the end of the ARS platforms. They just need a western entrance to those platforms.

Rather than building the arena over the lines, it should just be an open plaza. With the renders, they obviously haven't considered the connection to North Tce, unless they think large crowds filing over the narrow footpath on the Morphett St bridge is really going to be sufficient.

Also, considering how bulky this is, I imagine it kills the views from much of the biomedical precinct across the river.
Top

While I would love to see the lines turned into a plaza area, I imagine a development like this would at least require a footbridge or two across the train lines.
Top

Further comment, it's an unnecessarily large venue for 15,000 capacity (hell, not even Rod Laver Arena is takes up that much square meterage). Had this been the proposal for a new Convention Centre, I'd totally be on board because it's not a terrible design (obviously more cohesive than the current Convention Centre) and it's a good location, but it's not that. And hell, this proposal doesn't even have the option for an open air facility like most modern arenas.
Top

So, the State Liberal party are backing an Adelaide Venue Management proposal, does that mean the State Labor party will be backing the Stadium Management Authority proposal to redevelop the Memorial Drive facility? Deja vu?

After all isn't this a regular competition to see what each vested interest comes up?

Now that soccer is out of the proposal at least the focus is on the right thing, but which site will actually proceed, if at all?

Great point. We only need something roughly the size of Perth Arena, which is much more compact than this apparent behemoth.
Keep Adelaide Weird
Top

All views expressed on this forum are my own.
Top
Post Reply
89 posts