All high-rise, low-rise and street developments in areas other than the CBD and North Adelaide. Includes Port Adelaide and Glenelg.
Post Reply
63 posts

Heavy equipment at rear of the site, clearing old structures. Hopefully they will have site clean and level by end of week.
When things get intense, just remember "We're bunch of hairless apes, flying through space on a living spaceship".
Top

Both developments look good and will enhance the Unley Road streetscape considerably.

Buildings on Unley Rd are being demolished to pave the way for construction of $90 million twin apartment complexes, set to become the tallest buildings on the key thoroughfare.

Property developers Catcorp and Citify will join forces to ensure a smooth schedule of works for the two seven-storey buildings — next door to each on the western side of Unley Rd, opposite the Cremorne Hotel — to reduce significant disruption to residents and motorists.

Work is already underway at 244-246 Unley Rd where Catcorp, led by Anthony Catinari, will construct a $41 million, 59-apartment and retail complex.

The projects were given the green light by the State Government’s planning panel, despite Unley Council rules restricting development in the area to five storeys.

Both developers told The Messenger demand had been strong, with around 80 per cent of apartments already sold.

Mr Catinari said the largest demographic had been “downsizers” — people who already lived in Unley and wanted to remain in the district.

“Around 90 per cent of our buyers are owner-occupiers rather than investor-based buyers,” Mr Catinari said.

“We decided to target that demographic with larger apartments compared to those being built in the city.”

The Catcorp complex will include six levels of apartments, ground-floor shops, cafes, restaurants and a 60-space underground carpark.

“In the next couple of months, you’ll be seeing quite a bit of activity on site,” Mr Catinari said.

“It will be a couple of weeks of demolition then we will look to level the site and then three weeks of piling before the bulk excavations begin.”

The building design includes a sandstone frontage to Unley Rd and plant-covered balconies in an attempt to complement the character of Unley and Hyde Park.

Apartments prices start at about $600,000, rising to $1.5 million for the larger, top-level units, although there is only one of four left.

Joel Wilkinson, from Citify, said his company had sold 42 of 65 apartments at Hyde Park Place. Only one of four penthouses was still on the market.

The company radically changed its apartment configuration after the first wave of sales.

“We sold out of one-bedroom apartments, added some more, and sold out again,” Mr Wilkinson said.

“So we adjusted the floorplan to suit the market.

“The penthouses were especially popular with older residents who want to stay in the area.

“They are asking for modifications including wider doorways, disability access and shower grab rails (and) we are happy to comply.”

“I reckon the proposed negative gearing changes were affecting people’s thinking,” he said.

“We thought it would be tough to get both our projects to an adequate levels of pre-sales but we’ve exceeded expectations.

Mr Wilkinson said both developers had been in regular contact to ensure a smooth operation of the projects.

“We’ve been liaising to make sure we are not conflicting with each other,” he said.

“We’ve got a traffic-management plan in place and a majority of vehicles will park on the large site, but other traffic will have to arrive from along Unley Rd.

“It’s good for all the residents that we’re managing one process over the same period of time to hopefully ensure we won’t have people moving in and living next door to a construction site.”

Catcorp expected work on its development — including 700sq m of shops — to be finished towards the end of 2020.

Initial plans for the two sites by China-based Xinyu International collapsed after the developers missed a construction deadline.

That $80 million proposal for a seven-storey, 140 apartment development prompted community outrage over its height and a lack of parks.

Looks great. More of this for our main streets.
Keep Adelaide Weird
Top

Agreed! These types of developments should be encouraged along our inner road corridors
Top

According to one of the demo guys, site should be clean in about two weeks

. They estimate break ground in November.
At the moment there isn't anything overly exciting to see just yet.
When things get intense, just remember "We're bunch of hairless apes, flying through space on a living spaceship".
Top

Did anyone see the alternate JPE design? I don't mind the approved plan, but I reckon the alternative would have looked great.

noted wrote: ↑
Wed Sep 11, 2019 2:25 pm
Did anyone see the alternate JPE design? I don't mind the approved plan, but I reckon the alternative would have looked great.

I think that would have been pushing the aesthetic too modern for Unley Road.
Keep Adelaide Weird
Top

Possibly, but personally I think the contrast would work very well. Perhaps not so much with the residents though.
Top

Would be great to see progress photos from a drone but I believe this is no fly zone for anything over 100g.
When things get intense, just remember "We're bunch of hairless apes, flying through space on a living spaceship".
Top

Got some pictures a few weeks ago. Both sites are currently undergoing piling works.

Basement currently being dug out here (quite deep) and the building next door. I wonder if we’ll see a tower crane for either?
Top 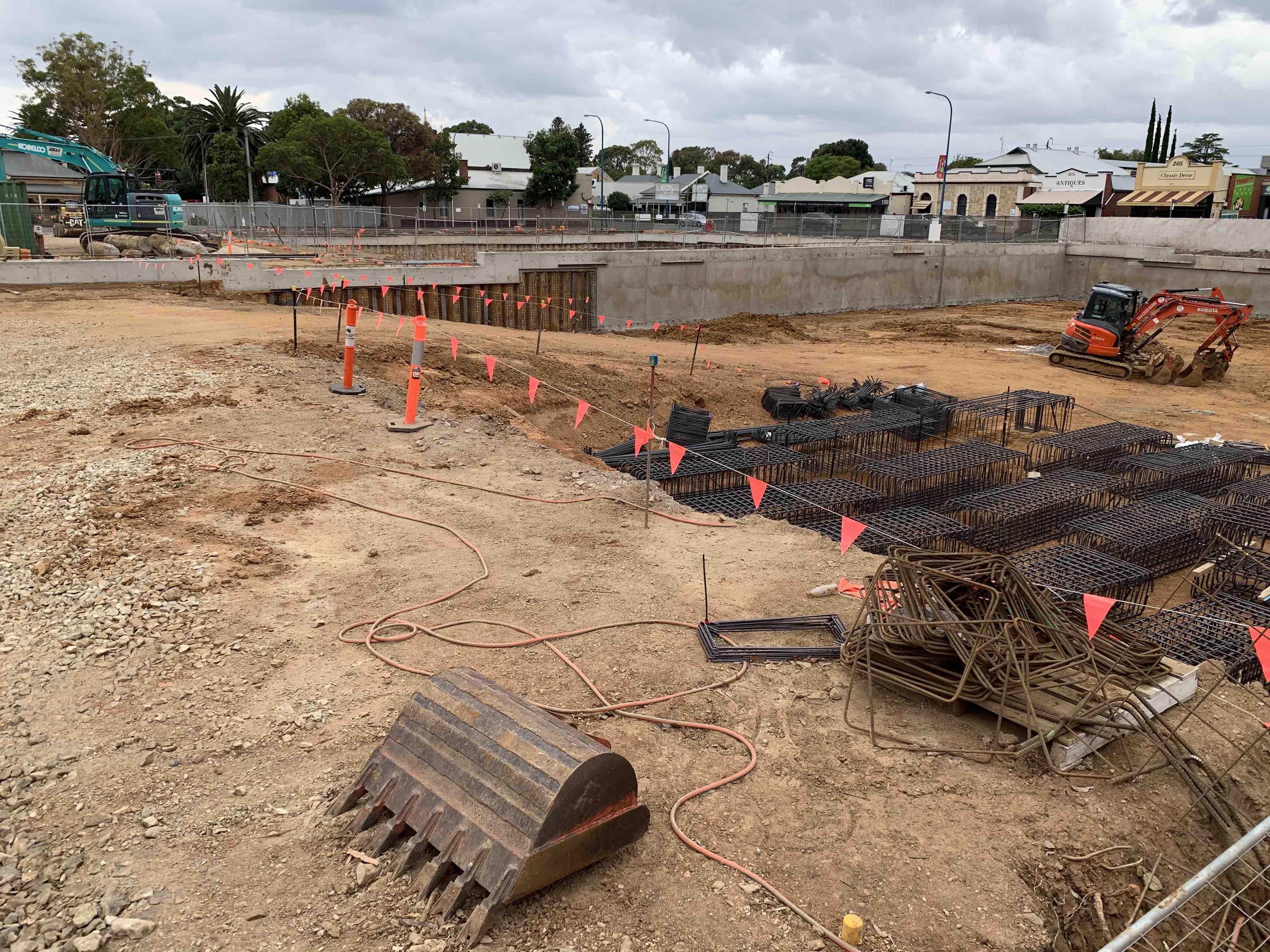 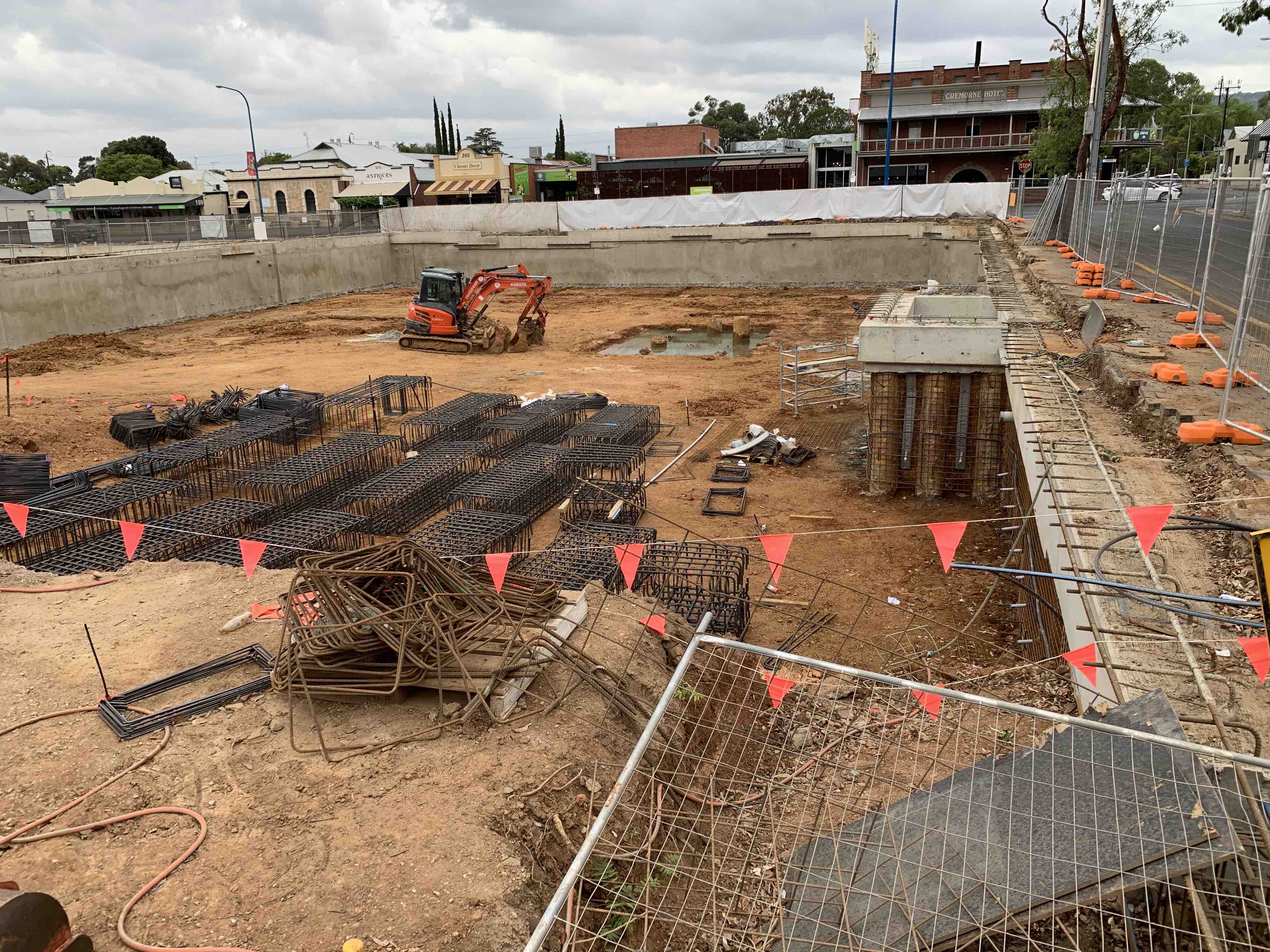 Crane base now installed on the southern end of the site.
Top
Post Reply
63 posts