All high-rise, low-rise and street developments in areas other than the CBD and North Adelaide. Includes Port Adelaide and Glenelg.
Post Reply
32 posts

It's an improvement, at least. But I also concur with others that the Jetty Road frontage is, more or less, awful.
Our state, our city, our future.

Looks like we ended up with a scaled down version. Was originally 12 stories and IMO much more fitting for the location.

Yuck.
Someone remind the designer of that...that it is currently the year 2017..remind them it's the 21st century..
Top

Much MUCH better than the original proposal. Digging the introduction of the angles, and the gold glass + raw concrete combo.
Top

Surely the Jetty Road / Colley terrace corner of the building should have more of a rounded design then that.
Top

GLENELG property mogul Andrew Taplin has been given the green light to build a seven-storey apartment and retail building on Jetty Rd — the first of three major developments planned for the strip.

It will include shops on the ground floor, a carpark on the first floor and 32 apartments on the top five storeys.

Mr Taplin said the development site was as Jetty Rd’s “diamond in the crown” and he hoped the new building would spark a revamp of the strip.

“This is a new evolution and an exciting time we’re going through,” he said.

“There’s no question that the street could benefit from a polish and this could be the catalyst that starts it, not just for developers but also for council.

“We’re thrilled, we’ve allocated funds, we’re committed to seeing the development happen and it will be great for Jetty Rd and the whole precinct.”

The Partridge St development is being assessed by he DAC and Mr Taplin says the business expects to lodge an application for the Bayside Village project this month.

He hopes to begin work on the Colley Tce building after the coming summer.

The building features a mix of one, two, three and four bedroom apartments, with the four-bedroom penthouse apartment including a deck overlooking Moseley Square and a swimming pool facing Jetty Rd.

Existing businesses will be offered places in the new development.

Under local planning rules, five storeys is the maximum height limit on Jetty Rd, except for blocks bigger than 1500sq m, where seven storeys are allowed.

The DAC approved the application for the 1250sq m site despite the rule.

Residents in the 10-storey Colley Court apartment building to the site’s north, were against the development and made a submission to the DAC.

Brent Humphries, representing the group, said it did not comply with the area’s development rules and the building would not match the area’s character.

“We’re very bitterly disappointed that the planning policies that have been put in place by the government have not, as far as we’re concerned, been followed,” he told the CoastCity Weekly.

“It is a short-term fix for some people which in the end we will rue for the rest of our lives and for future generations.”

Holdfast Bay Council and the Holdfast Bay Residents Alliance had called for buildings on the corner of Jetty Rd and Colley Tce to be limited to five storeys.

They said it would prevent them overshadowing the adjacent Moseley Square.

That's a much better design then the monstrosity posted above. However, I don't think it's ideal for the location. That would be better suited to the back streets of the area, or North Esplande, not the main strip.
Top

This has now been approved.
Top

Smokemart & Giftbox opened a new store on the ground level of this site yesterday (20 September). They will retain their tenancy once the new building is complete.
Our state, our city, our future.

Proposed amendment on public notification. Slightly higher at 28m and will now be a hotel with rooftop bar. 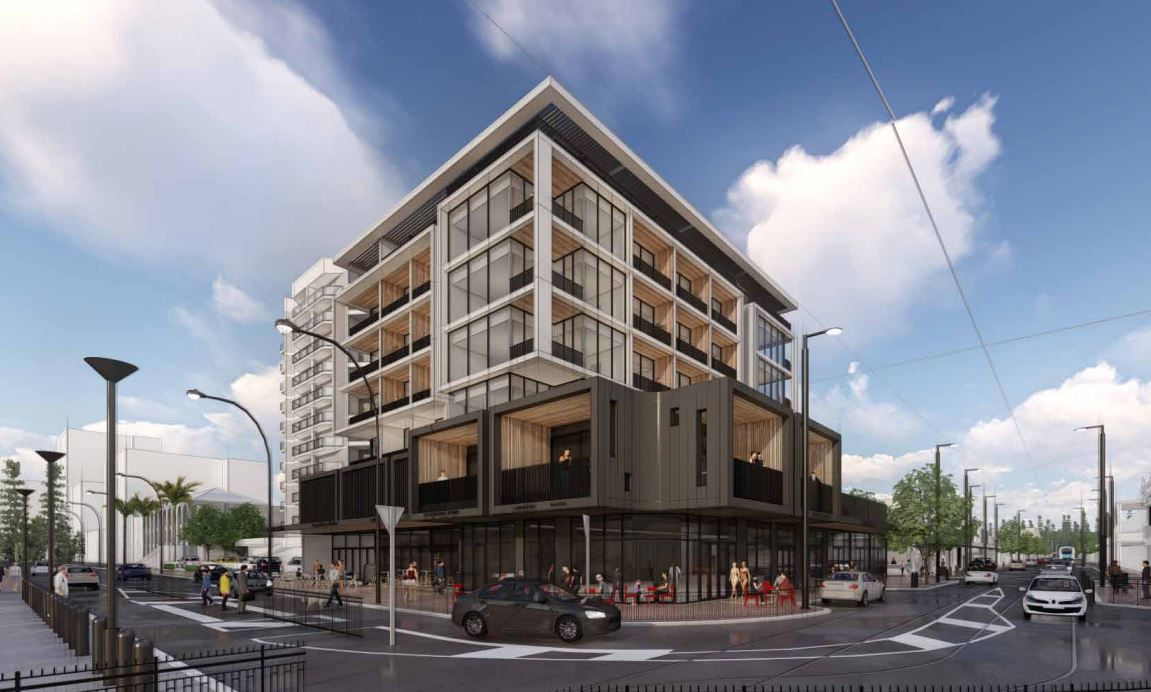 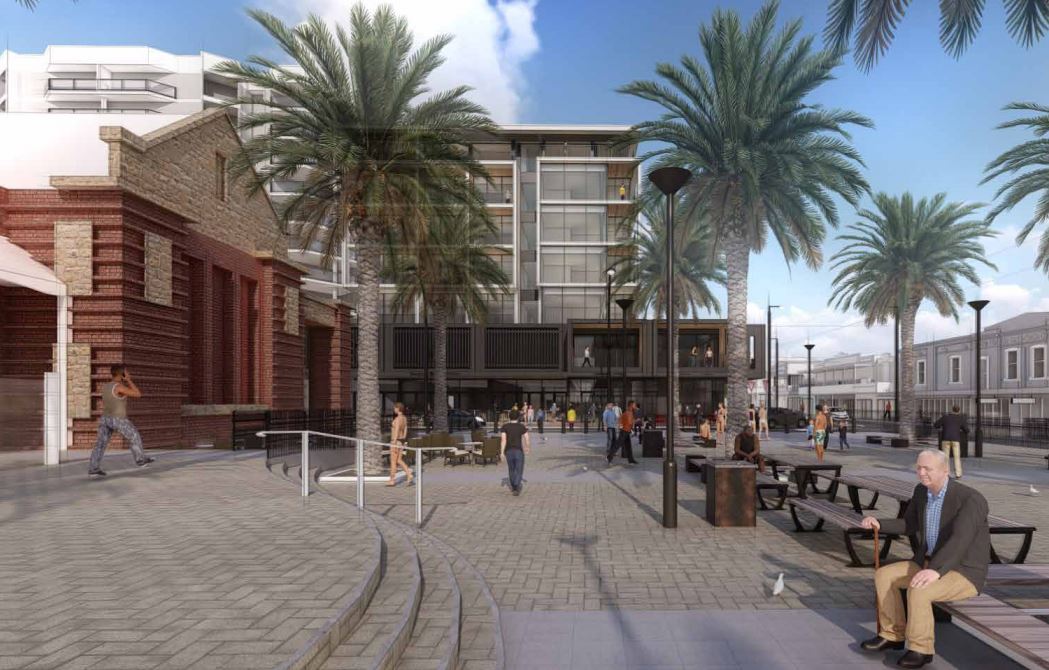 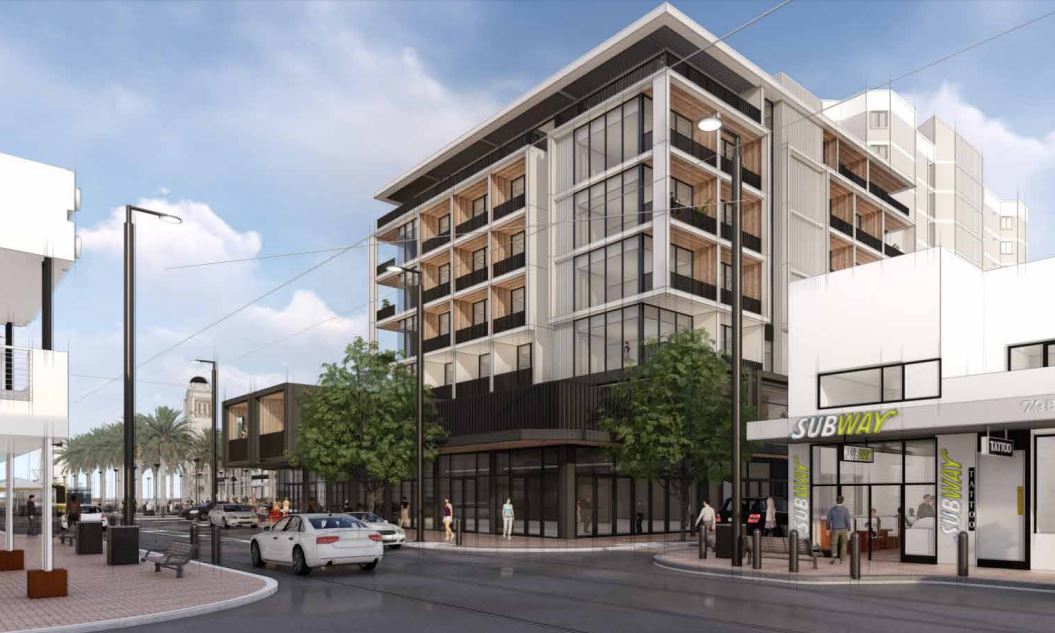 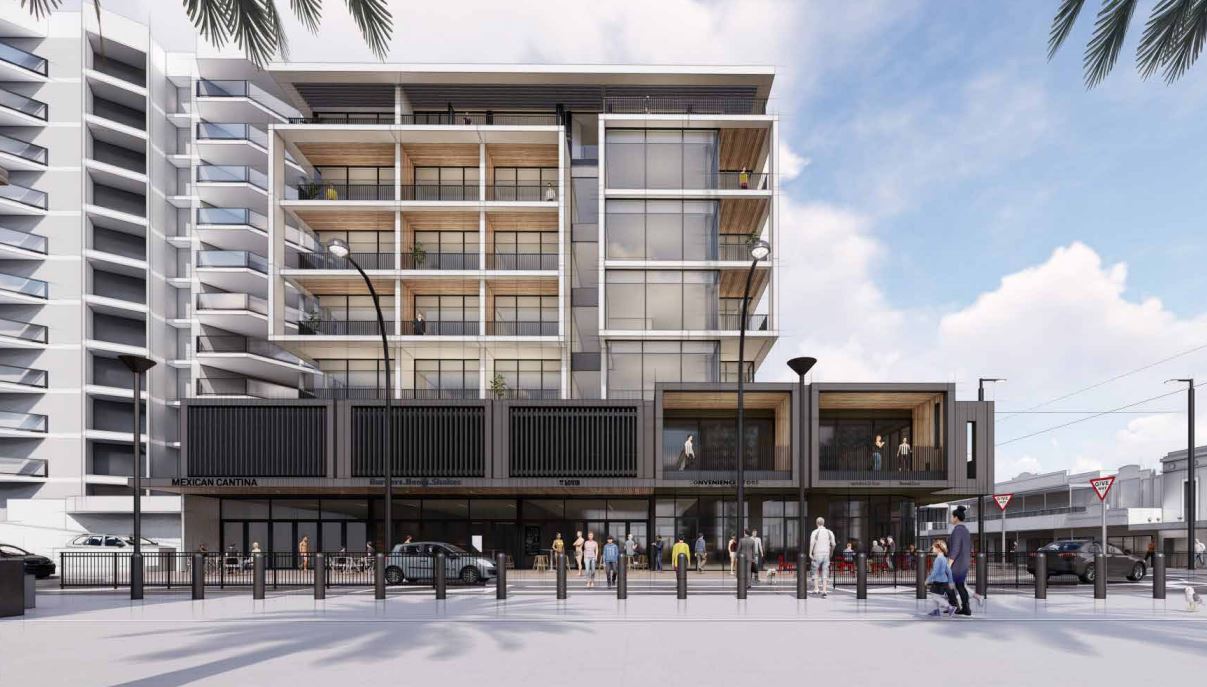 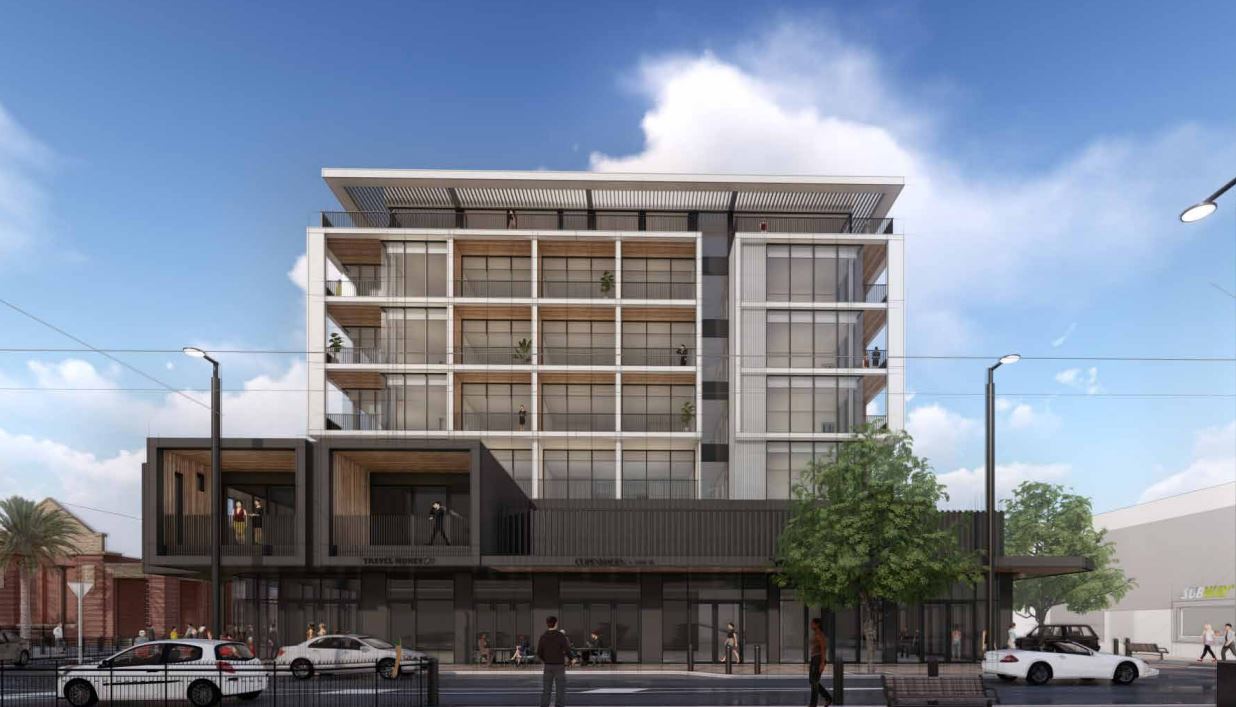 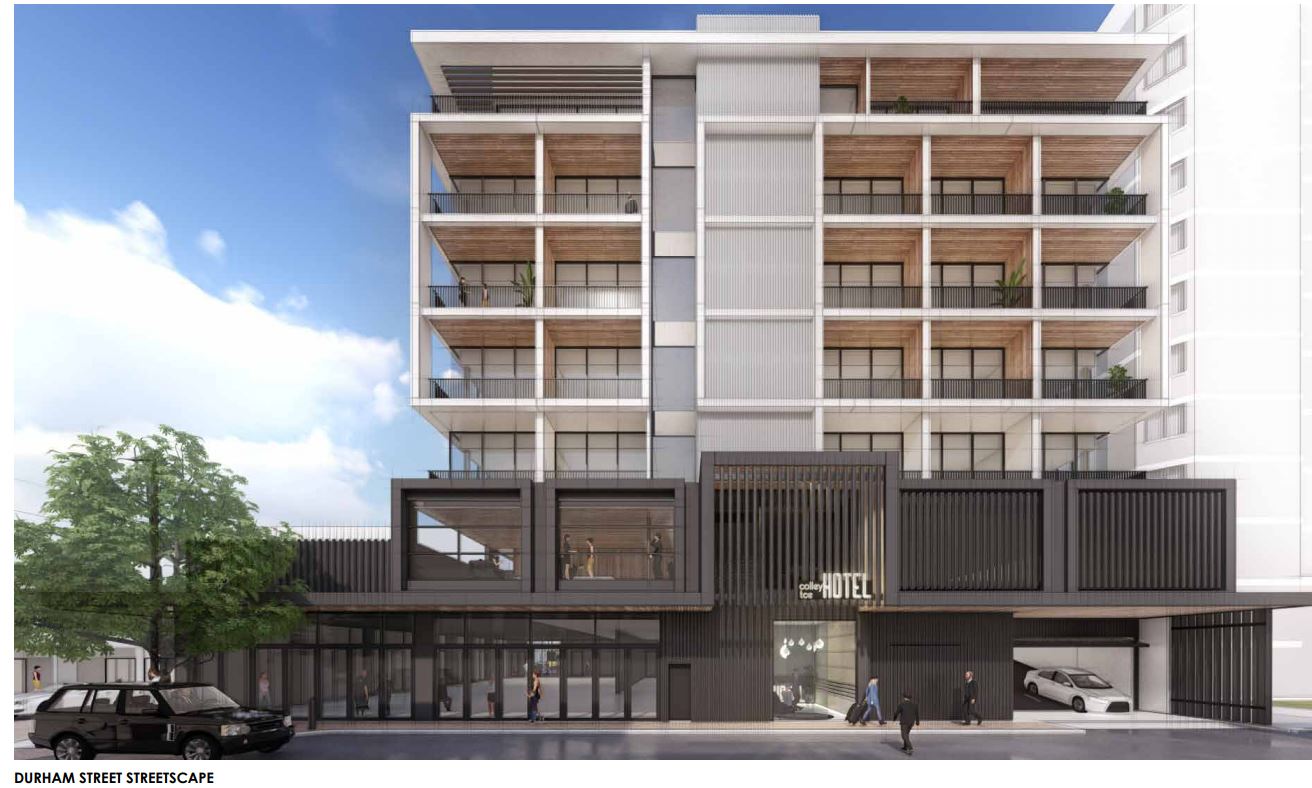 They look good, but I hope that the paint they use for the darker parts is strong enough to deal with the salt and sand in the air and doesn't fade away too quickly.
Top

It's probably the best proposal yet. I was pleasantly surprised to see that they've included a setback from Jetty Road, although the first level balcony overhang (extending above footpath/awning) is not really in keeping with this mitigated scale. I was also concerned about the above-ground carpark being visible from Mosley Square, but the plans show that it's only the ramp passing this section not cars facing out (as well as being screened).

Ben wrote: ↑
Wed Apr 29, 2020 6:52 pm
Proposed amendment on public notification. Slightly higher at 28m and will now be a hotel with rooftop bar.

It's not bad, but for the location, it should be taller. The rooftop bar will have its views blocked by the taller buildings on Colley Terrace.
Top

Ben wrote: ↑
Wed Apr 29, 2020 6:52 pm
Proposed amendment on public notification. Slightly higher at 28m and will now be a hotel with rooftop bar.

It's not bad, but for the location, it should be taller. The rooftop bar will have its views blocked by the taller buildings on Colley Terrace.

I disagree. The height is reasonable for the area. Jetty Road is not the place for anything more than 6 or 7 storeys as you want to retain the main street feeling of the area.

I also don't think people want views down Colley Terrace, they want to see towards the beach.
Top

This is quite a solid proposal.
Our state, our city, our future.

All views expressed on this forum are my own.
Top
Post Reply
32 posts