A controversial bikeway plan that would wipe out hundreds of parking spaces on Pirie and Waymouth streets looks set to be dumped – to be replaced with an old and equally contentious plan.

Adelaide City Council looks set to back-pedal on a controversial bikeway plan to wipe out hundreds of car and motorcycle parks down Pirie and Waymouth streets.

At a workshop meeting on Tuesday night, Cr Philip Martin branded the proposal a “dud” — and suggested reviving 2016 plans for a separated bikeway down Flinders and Franklin streets.

The old plans were put on hold because of strong trader backlash, however, council staff told the Flinders and Franklin would still be the best option.

Cr Martin, who was against the Waymouth St plan, said the council should not have turned its back on the original decision.

“There is one option, there was always one, Flinders and Franklin,” Cr Martin said.

“I am appalled that this matter is back in the hands of the elected body, having made a clear decision in 2016 that an east-west bikeway would be located on Flinders and Franklin.”

The Advertiser reported earlier this week that a bikeway down Pirie and Waymouth would have removed 363 car parks and 63 motorcycle bays.

The council agreed the route down Flinders and Franklin was “low stress and comfortable experience” for cyclists, but that was shunned in November 2017 because traders said it would damage business.

Last April, the council decided to look into whether Waymouth and Pirie streets would be a better option, despite an earlier study finding they would be too narrow.

Cr Robert Simms said if a bikeway down Pirie and Waymouth does not go ahead, the Flinders and Franklin plan should be revived.

“I get the sense that support for that option (Pirie and Waymouth) is evaporating … if this is not a live option, we should go back to Flinders and Franklin and advance that,” Cr Simms said.

Deputy Lord Mayor Alexander Hyde said a Pirie and Waymouth bikeway should be “categorically ruled out” because the street is often at capacity.

However, he thought a bike lane down Wakefield and Grote streets was the best way forward.

Should the council go ahead with a bikeway down Flinders and Franklin street, it would have to rescind its 2017 decision. City council planning executive Shanti Ditter said the former plans would need to be reviewed because they prepared “some time ago”.

A report would have to go before a council committee for discussion and then a council meeting. The council and the State Government have contributed to funding, and that has to be spent by June 2021.

by Listy
Lets not forget that the so called "strong trader backlash" against the Pirie St bike path in 2016 was basically one cafe owner who was either mates with or duped by Alex Antic into commenting in the media.

by SRW
At least we can console ourselves with the fact this madness is not unique to us:
'Geelong council votes to spend $2 million to rip up part of the city's $8 million 'green spine' as reported by ABC News

Listy wrote: ↑
Wed Feb 26, 2020 11:54 pm
Lets not forget that the so called "strong trader backlash" against the Flinders St bike path in 2016 was basically one cafe owner who was either mates with or duped by Alex Antic into commenting in the media.

And, who has since moved (to Franklin St to be fair, but now has only loading zones and no-standing zones in front).

by ChillyPhilly
Here's a movable bike platform in Rotterdam.

We could do with some of these. 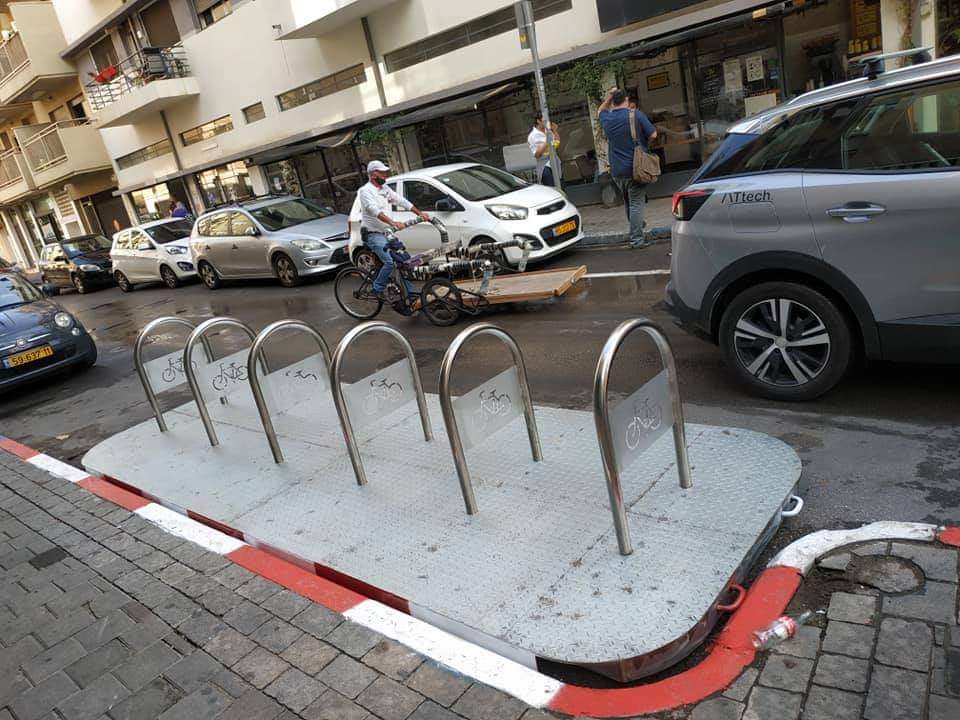 by SRW
Bike parking is adequate in most areas of the city from my experience. I’d rather not distract from the real issue of a lack of safe and protected routes.

by ChillyPhilly
I agree, but the purpose of these is to ween people away from using carparks. Plus, they are adaptable to needs.

SRW wrote: ↑
Sun Nov 22, 2020 9:57 am
Bike parking is adequate in most areas of the city from my experience. I’d rather not distract from the real issue of a lack of safe and protected routes.

I agree that the priority should be creating safe and protected cycling routes.

However, while there are a decent number of placed to park bikes, there is a lack of secure places to park bikes. Typical footpath bike racks tend to be very exposed and lack security features like surveillance cameras. Furthermore, a lot of buildings and businesses still have a lot of silly restrictions forbidding people from bringing bikes inside where they could be parked more safely.

Even if we can create safe on-road cycling routes, people will still avoid cycling if they are worried their bikes will be stolen when parked.
All times are UTC+10:30
Page 27 of 27
Powered by phpBB® Forum Software © phpBB Limited
https://www.phpbb.com/