I don't live anywhere near the flight path, and I can hear the 777's from the international carriers as they fly out. Waah waah waah poor me.

Get rid of the curfew.
People can live next to a freeway, a train line with suburban and freight trains, going past at all hours of the day and night(the noise from a freight train lasts a lot longer then an aircraft btw), but a plane sets them off?

Instead of pandering to noisy minority groups, like Labors Steve Georganas does in Hindmarsh, they should be pandering to the majority.

Hilarious that someone is pointing out that only 1,500 people were part of the survey. Do you not know that that is the usual rough figure of people surveyed?
Hmm, I can think of far more important issues that the number of people surveyed wasn't a problem...but whatever.

By plush suburbs, do you mean the likes of Medindie with it's million dollar historical mansions? You do realise Patrick, that they are practically right under the flight path as well?
Last I checked houses around Mile End(where the Hindmarsh member lives), and other surrounding areas, weren't exactly cheap areas to buy property in.

If lifting the curfew would add a significant economic benefit to the state, then it should be done.
A hotel is being built at the airport. If other Australian cities have curfews, or will be adding curfews as the article suggests, then would that not potentially make Adelaide a type of stop over hub for international flights into Australia during our night hours? Would that not potentially also add more international visitors to our state/city, who may decide 'hey while im here, i may as well stay a few days and look around'...?

Weren't their houses sound proofed while Steve Georganas was the Labor MP for Hindmarsh while Labor was in federal government?
How many tens of millions of tax payers dollars did he waste? What, is he saying now that the sound proofing he used our tax dollars for, is ineffective? Hmm...interesting.
Top

rev wrote: ↑
Sun Dec 31, 2017 7:57 pm
People can live next to a freeway, a train line with suburban and freight trains, going past at all hours of the day and night(the noise from a freight train lasts a lot longer then an aircraft btw), but a plane sets them off?

I live in Mawson Lakes. The main freight line and marshalling yards are at the back of my property, I'm under the flight path for Parafield Airport and close to Salisbury Highway and Port Wakefield Road. Marshalling often takes place at 3:00am and sounds like thunderclaps in the backyard. The highways are a constant background drone. I don't complain as all those transport modes were present when I bought the property. I've learnt to tune the noise out. The human brain is very adaptable. I enjoy watching the planes fly overhead especially when there is something exotic like a Tiger Moth or P-51 Mustang. Yet other residents campaign for the removal of Parafield Airport even though it produces the least noise and (unlike the railway and cars) has a curfew. Clearly there is something about planes that just sets them off. I suspect that it dates back to when air travel was for the privileged few.

What's wrong with the curfew? I doubt there will be a significant increase in traffic if it's relaxed, more likely current traffic will be spread out over more hours. You could relax the curfew if situations arise like delayed / diverted flights etc. The curfew actually creates business, if a flight is too late to leave the airline will put people up in hotels overnight. I just don't see the need for a 24/7 airport in Adelaide, the airport is clearly not at capacity during it's 17 hours of operation. Planes still come in at night, the post, flying doctor etc. I've lived next to the freight line before and there's about 12 trains a day not a big deal and not many people use freeways at night, the airport shouldn't be shut at night but a curfew for passenger planes is not a bad thing, if we lived in a big city with an airport at capacity and had an airport so close the CBD we would be looking at options to build a new airport. The airport clearly is not at capacity so why do we need a 24/7 airport?
Top

All for relaxing the curfew, but does Adelaide Airport get sufficient traffic for all night operations?
Last edited by Brucetiki on Tue Jan 02, 2018 8:58 am, edited 1 time in total.
Top

Brucetiki wrote: ↑
Mon Jan 01, 2018 2:47 pm
All for relaxing the cure, but does Adelaide Airport get sufficient traffic for all night operations?

Aren't the interstate mail (and similar) freight planes exempted from the curfew now, based on the quiet aircraft they use?
Top

I think you mean quieter..because they are anything but quiet.
Top

Torrens I think there is a need for our airport to open longer hours (not necessarily 24/7) as there are only so many “slots” available for planes to take off and land. Once these slots are full then what? It will limit numbers coming in/out of Adelaide.
Top

Who even mentioned or even cares about Qantas international flying here?
Top

how good is he wrote:Who even mentioned or even cares about Qantas international flying here?

The member OlympusAnt brings it up every now and then for some reason, along with Torrens Park station and a few other things that annoy him.
Top

how good is he wrote: ↑
Tue Jan 02, 2018 9:52 pm
Torrens I think there is a need for our airport to open longer hours (not necessarily 24/7) as there are only so many “slots” available for planes to take off and land. Once these slots are full then what? It will limit numbers coming in/out of Adelaide.

I don't think a lack of slots will be a concern for Adelaide for many years, so any change in the curfew will be for the convenience of the airlines using the airport. If the Flight Radar 24 website is reasonably accurate then Adelaide sees about 120 aircraft movements a day. During the middle of the day the cadence drops off significantly (most weekdays there seem to be no movements at all between 2:30 & 3:30pm for example). You could double or maybe even triple the number of flights per day just by filling in the daytime gaps. Plus a lot of those flights are regional - if in the future slot availability somehow became really dire, airport management could/would raise the cost of slots to 'encourage' the regionals to move out of Adelaide & shift elsewhere (Parafield?)

To give an idea of what's possible even with a nighttime curfew, Heathrow also has an 11pm-6am curfew with limited landings permitted between 4:30 & 6am, and manages ~1300 movements per day (albeit with 2 parallel runways & 5 terminals!).
Heathrow is an interesting case because 24hr operations have been permitted since the 1960's - ie the curfew is entirely voluntary. Heathrows management have presumably decided that presently the costs of 24hr operations outweigh the benefits - that 6-7 hour downtime saves money on salaries & allows for maintenance cycles, security sweeps & other logistical operations to take place without too many passengers milling around & avoids the known accident risks of operating an airport & having takeoffs/landings occurring during the dreaded circadian low.
Top

Unfortunately, Australia is in the middle of nowhere (geographically speaking) and takes a decent flight to get to / from. The issue of available slots, flight connections and curfews at originating airports must also be considered when it comes to what could happen if Adelaide changes its own curfew.
Top

Adelaide to Dubai just left as of typing (midnight of 19/20 January). Two hours delayed. Any word on why? 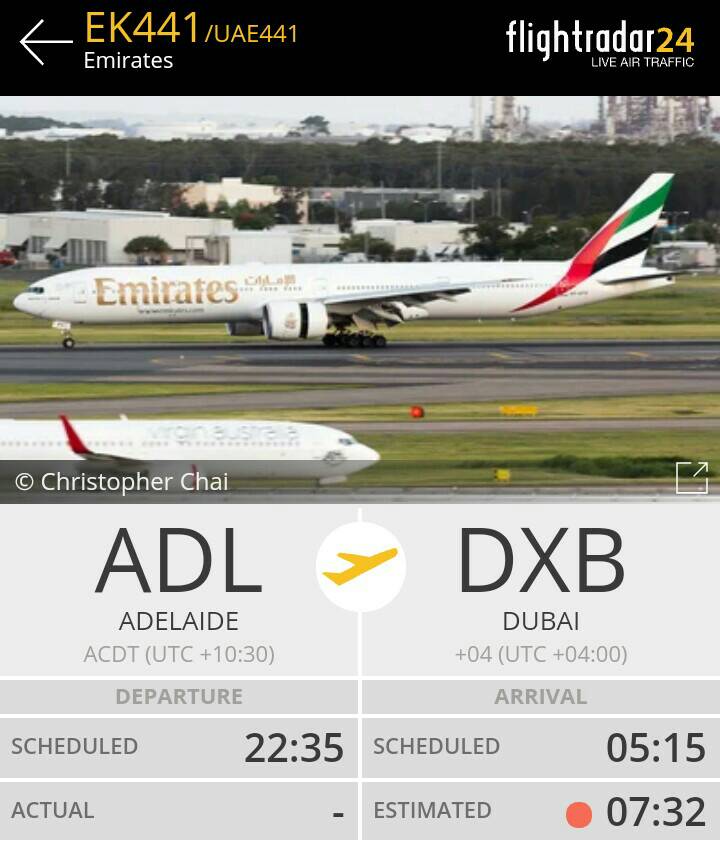 Yeah I heard it fly over before.

How much is the penalty for flying outside the curfew?
Top

How much is the penalty for flying outside the curfew?

No idea about the penalty, but it seemed louder than usual - the Monday journey of this route is much quieter as it seems to fly higher.
Our state, our city, our future.

All views expressed on this forum are my own.
Top
Post Reply
2806 posts