Does the new station look to have much in the way of comfort for patrons?
Our state, our city, our future.

Not yet, some seating has been installed but a lot of the shelters are not completed yet. I'd wait a bit to see what else they add.
Top


Major construction on the Torrens Rail Junction Project is almost complete. A key milestone has been achieved with the return to service of trains on the Outer Harbor and Grange Line and the opening of platforms to passengers on the new lowered Bowden Railway Station on 15 January 2018. Both the Gawler rail line and the interstate rail freight line are running on their final alignment in the Adelaide Park Lands.

Remaining works will continue during day and intermittent night shifts with landscaping and other finishing activities underway until March.

Finishing activities include resurfacing of roads and footpaths, installation of fencing, landscaping and re-planting in the Park Lands and Bowden and the installation of street furniture.

We have now completed the three major road/rail bridges at Gibson Street, Park Terrace and within the Park Lands, with safety fencing and throw screens. The removal of the Park Terrace level crossing has improved traffic flow on Park Terrace, resulting in efficiency improvements across the broader road network.

The ConneXion Alliance team of more than 350 people has worked day and night, clocking up 750,000 work hours to safely deliver the Torrens Rail Junction Project.

Completion of our major construction milestones has led to a signficant reduction in the number of trucks using War Memorial Drive, Park Terrace and Port Road. With final works in the Park Lands and at Bowden Railway Station, haulage routes are planned to minimise community impacts. Signage and traffic controllers are in place to advise of changed conditions and we ask that you plan your journey in advance. Noise and vibration management

Final construction works will be ongoing over the coming weeks. Whilst some inconvenience may be expected, every effort will be made to minimise disturbance to the local community. Bowden, Hindmarsh and North Adelaide residents and businesses in close proximity to the works may experience noise, light spill and some vibration. 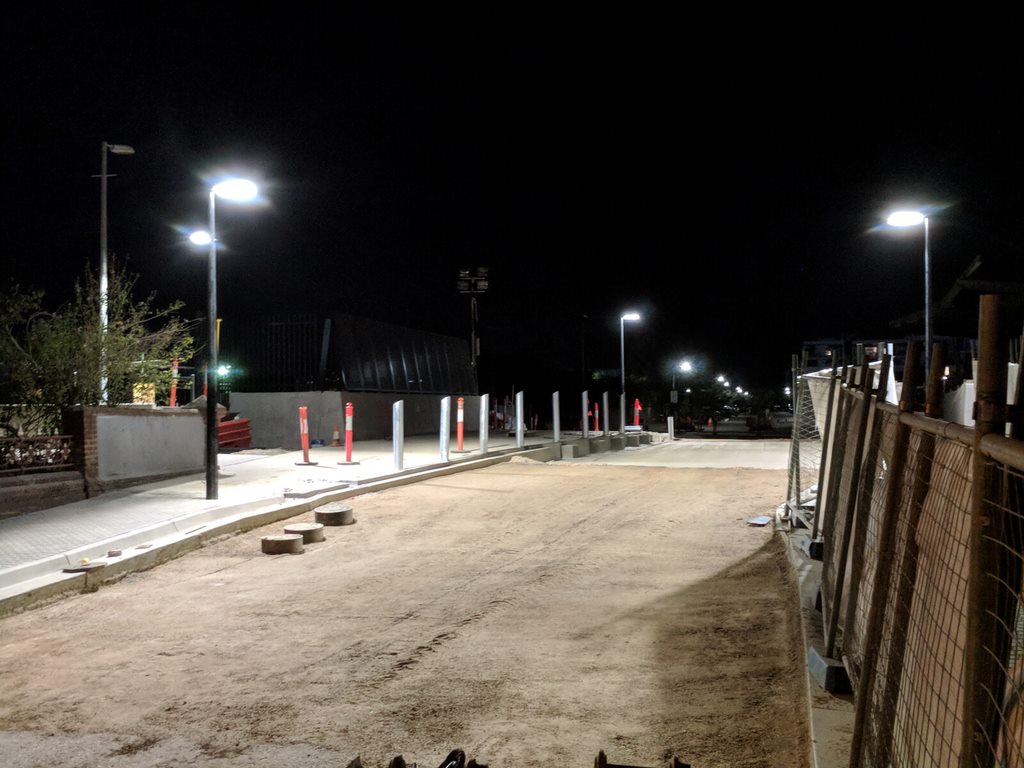 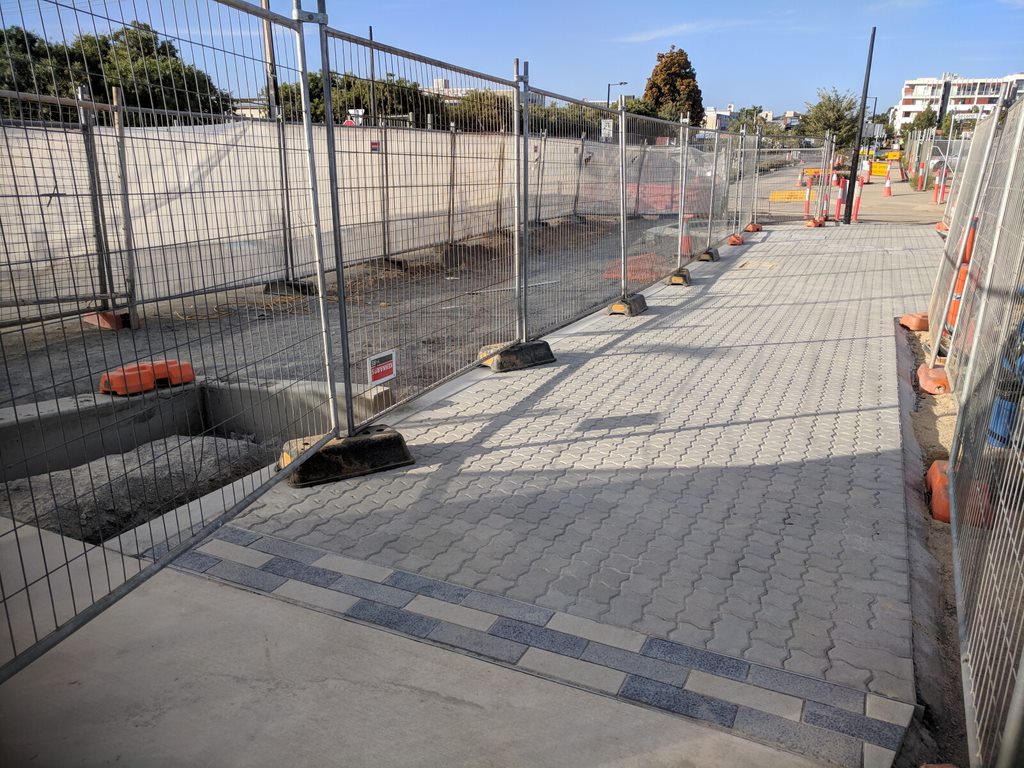 Also, screens are up at Bowden Station 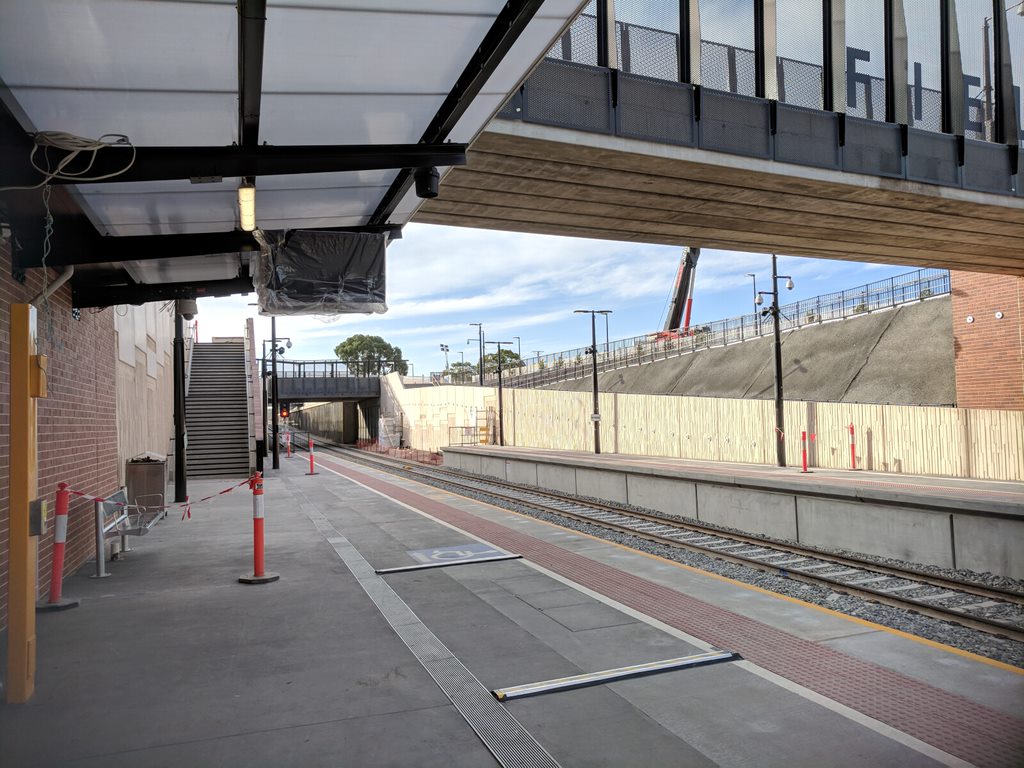 Here's footage of the trip through the whole trench and the rail overpass. 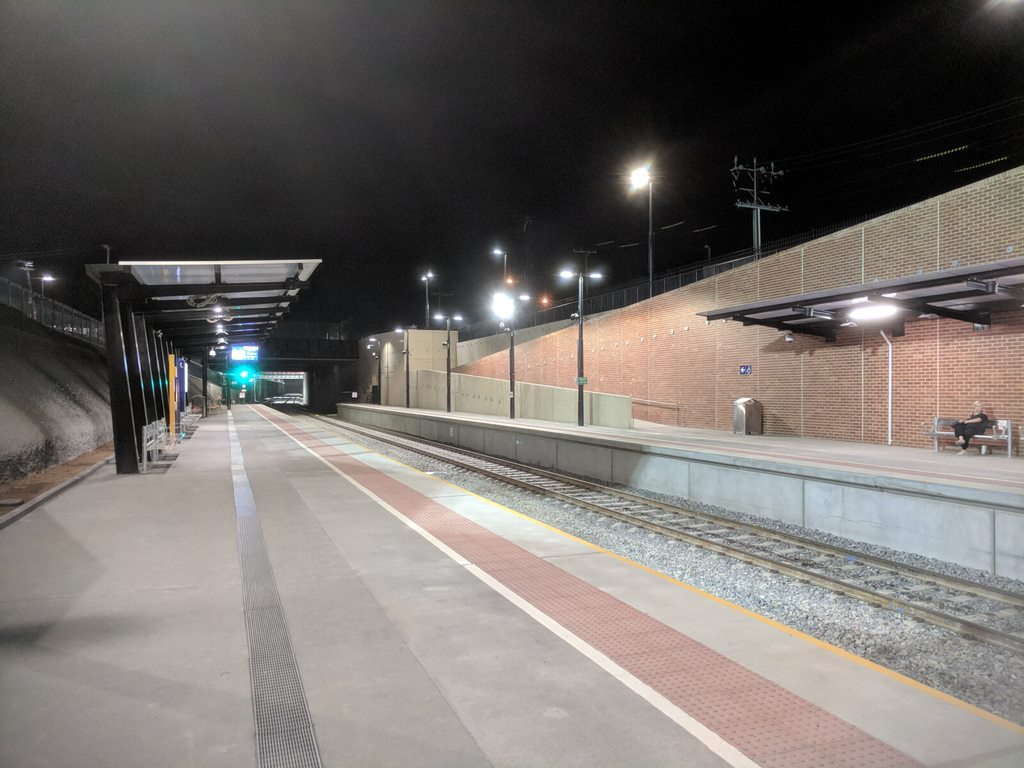 Why is War memorial drive still 40 k/h there was not one worker on site . All they need to do is clean up and move out. Everything the state government does is 95% finished for months.
Top

There's still work going on alongside the train lines including the active crossings, fencing and site remediation.
Top

Mr Mullighan said speed restrictions would have to be removed when there were no workers present and the road conditions were not a danger.

The plastic barriers abutting on the cycle lane are probably considered a hazard to traffic.
Top

I ride home that way every night, and the plastic barriers aren't great, but they're not the worst hazard. All the grit and dirt in the lane is a far bigger issue (I managed to put my fillings to the test once hitting a sizeable rock unsighted), plus people walking in the cycle lane due to the lack of anywhere else to walk (usually walking with traffic, and with headphones on, so they can't see or hear anyone approaching from behind...)

Anyway, looks like Gibson St will be reopening some time this week. A lot of fencing has come down and line marking done. From the looks of things, just a few street lights and some plantings remain before it can reopen for traffic. Some minor works on the outside lanes and gutters for Park Tce this weekend with some lane closures, but looked on track to be done before Tuesday. 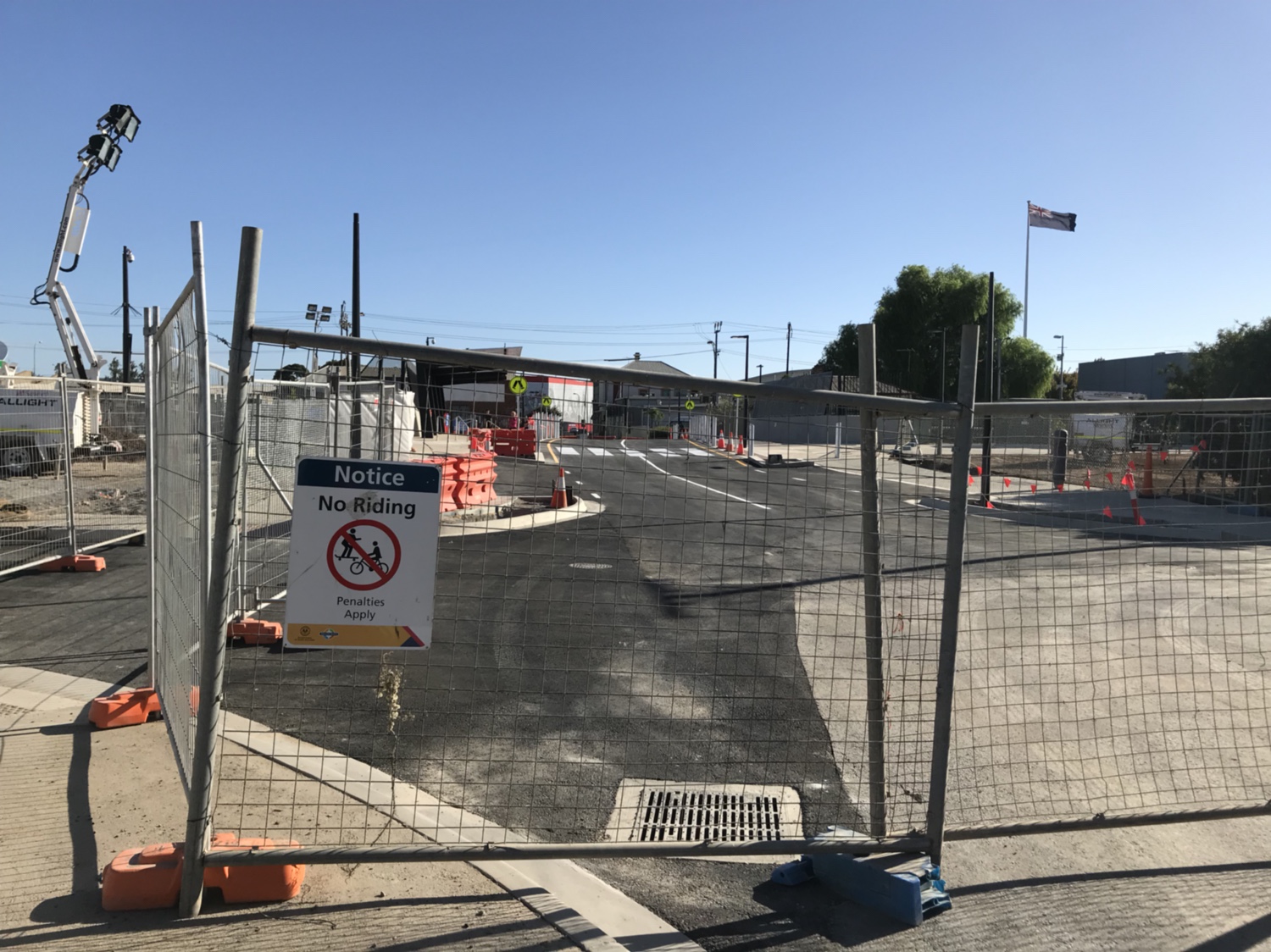 Another photo from tonight 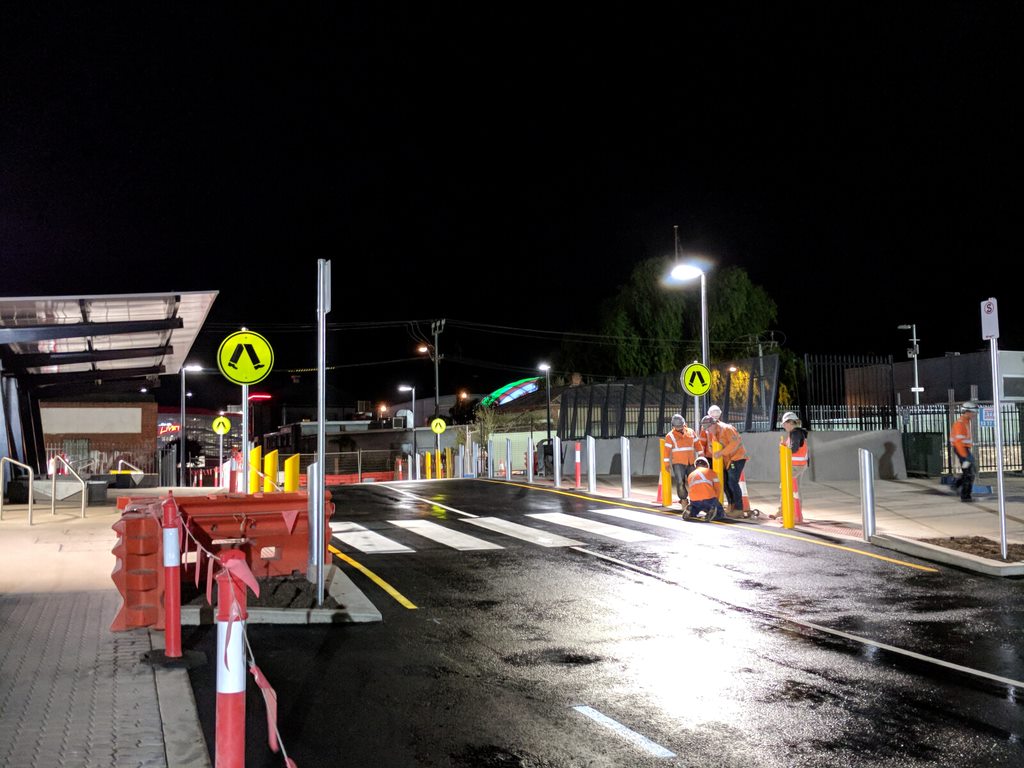 Gibson St has now reopened to all traffic. Work continues on the bike/pedestrian path and bridges.

Not sure why no-one thought it would be a good idea to re-do the road surface and footpaths of the bit of Gibson St between the train line and Port Rd, such a short section and in horrible condition.
Top

Not sure why no-one thought it would be a good idea to re-do the road surface and footpaths of the bit of Gibson St between the train line and Port Rd, such a short section and in horrible condition.

That part would be outside the project scope, and would be council responsibility. Hopefully it will be done soon.
Top

Not sure why no-one thought it would be a good idea to re-do the road surface and footpaths of the bit of Gibson St between the train line and Port Rd, such a short section and in horrible condition.

That part would be outside the project scope, and would be council responsibility. Hopefully it will be done soon.

Oh absolutely. Council should have been proactive though and done it while the road was closed. Instead they've been doing random backstreets (like the little dead-end surface level bit of Park Tce at the end of Eighth St).
Top
Post Reply
291 posts