Thought I would create a new topic focusing on maintenance of our critical infrastructure.

Important thing to note is that the Port River bridge has now been replaced, and I'm not sure of the date of the data the Advertiser has, considering the Port Adelaide viaduct was refurbished only a few years ago.

THE South Rd bridge collapse has ignited concern about the safety of the state’s bridges with alarming new figures revealing almost half of all 1500 bridges are ranked as “poor” by expert engineers.

Six of the 20 worst-ranked bridges in the state are on popular train routes to Adelaide’s CBD, used by thousands of commuters each day.

The rating system, which charts the deterioration of SA’s bridges shows more than 600 are ranked below the level targeted by the State Government.

The current bridge health system rates bridges from 0 to 100, with the data showing 24 bridges have a health index of 40 or less.

Six of the 20 lowest-ranked bridges in the state are on train routes, which handle thousands of commuters each day.

Opposition infrastructure spokesman David Pisoni said there were huge question marks over a system that rated the South Rd tram bridge at Black Forest at a health rating of 71 and called on the Government to assure the public its bridge inspection regimen was up to scratch.

Transport Minister Stephen Mullighan has refused to hand over inspection records for the South Rd overpass until an independent inspection of the walking path and bike track that crumbled last month has been completed.

“We have commissioned Aurecon to conduct an independent review of the failure of the pedestrian and cycle path on the tram overpass structure and will receive a report not just on the cause but also including potential rectification options,” Mr Mullighan said.

“Aurecon will also provide a detailed analysis and comment on the bridge’s condition, and the department’s inspection and maintenance regimen since its completion in 2010.

“While I am advised that our bridge maintenance and inspection (regimen) is conducted according to industry standards, this ... shows that it is possible for unexpected circumstances to arise with the condition of our infrastructure, and it is prudent to conduct a review of all of our bridge structures above and beyond our routine inspection regime.”

The review will determine the long-term solution to fix the busted overpass, with the Civil Contractors Federation estimating the repair job could take up to 12 months.

Mr Mullighan stressed all of the state’s bridges in operation had been deemed to be safe, and the bridge health index was a “useful proxy for the likelihood of maintenance and expenditure required”. He defended the state’s inspection regimen and said lower-than-desired bridge health results in 2014-15 and 2015-16 were caused by a delay in bridge works planned for 2015. But Mr Pisoni said an improvement in the index wasn’t enough to satisfy South Australians concerned by the South Rd drama .

“South Australians want to know how often bridges are inspected and who inspects them, and what is the inspection process — also how quickly problems are fixed once they are identified,” he said. “Bridge maintenance is not as exciting as cutting a ribbon to open new roads but it is vitally important to protect public assets and user safety.”

Former Department of Public Transport and Infrastructure chief executive Rod Hook said it was hard to answer at what rating a bridge needed to be upgraded because “each bridge is different and each purpose is different”, adding: “What it does is measure the value of the bridge compared to its value when it was built and give an indication of when maintenance and resourcing needs to increase.”

Mr Hook said the index was a “handy guide” of an asset’s value, but agreed its inspection history was most important.

“What you really need to know is who inspected it, when was it inspected and what does the report say,” he said.

Bridges in disrepair as Martin flips sides
By Brad Crouch

FOUR bridges branded “poor” by government inspectors — who declared in 2010 they needed repair or replacement — have been left untouched.

The ageing and decaying structures include a rail bridge at Belair, which officials say is “structurally sound”, and others at Clare, Meadows and on Strathalbyn Rd.

Mr Hamilton-Smith — now a minister in the Labor Government — fought a long-running battle to access information on 696 bridge inspection reports under Freedom of Information Act.

“It’s a disgrace. It is in the public interest for this information to be out in the open,” he said at the time.

Mr Hamilton-Smith yesterday said: “I have always held the view that the condition of our bridges is a critical public safety issue. The more openness and accountability there is on the subject the better.”

The department, which in 2010 said the bridges needed to be repaired or replaced by 2020, this week told The Advertiser it had since changed the way it rates bridges, no longer using a “poor, fair or good” system.

“The Department has invested approximately $2 million on bridges identified as ‘poor’ in 2010,” a statement from the department said.

“Nearly all bridges described as ‘poor’ in 2010 have been fully or partially replaced or renovated to improve their condition.”

The Transport Department released a list of eight of 12 bridges rated as “poor” in 2010 as having been “fully or partially replaced or renovated”.

“The remaining bridges are included in future maintenance programs,” it said. “All bridges identified in the 2010 report, regardless of rating ... have been deemed to be structurally safe and fit for purpose.

“For road bridges, inspections are undertaken every 4 to 8 years with older, larger and significant bridges being inspected more regularly.

“For rail bridges, inspections are undertaken every two years. If necessary, action is immediately taken to repair any defects or damage.”

I'm not the least bit surprised about half of them. Our road infrastructure maintenance backlog is getting worse.
Any views and opinions expressed are of my own, and do not reflect the views or opinions of any organisation of which I have an affiliation with.
Top

Someone was taking photos of the Jervois Bridge today from transport SA.
I Follow The Port Adelaide Football Club
https://www.facebook.com/IFollowThePAFC/
Top

DPTI South Australia have recently published a video of the Outer Harbour rail bridge refurbishment over the Port River.

This was done when the line was closed to construct the new rail bridge over South Road and constituted a replacement of the bridge spans and tracks.

Has anybody heard of any progress on reinstating the shared path bridge next to the tram line over South Road? It seems to have gone very quiet.

[Not sure if this belongs in Maintenance, North-South Corridor, or Trams thread]
Top

Work is continuing on fixing the cycling bridge over South Road 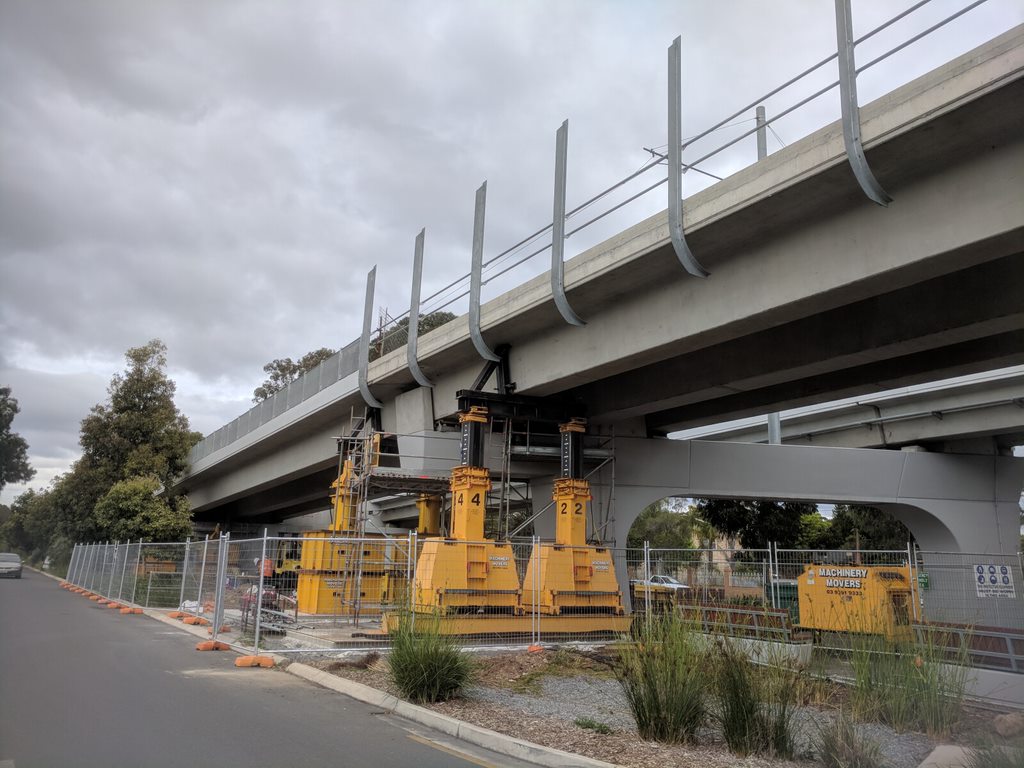 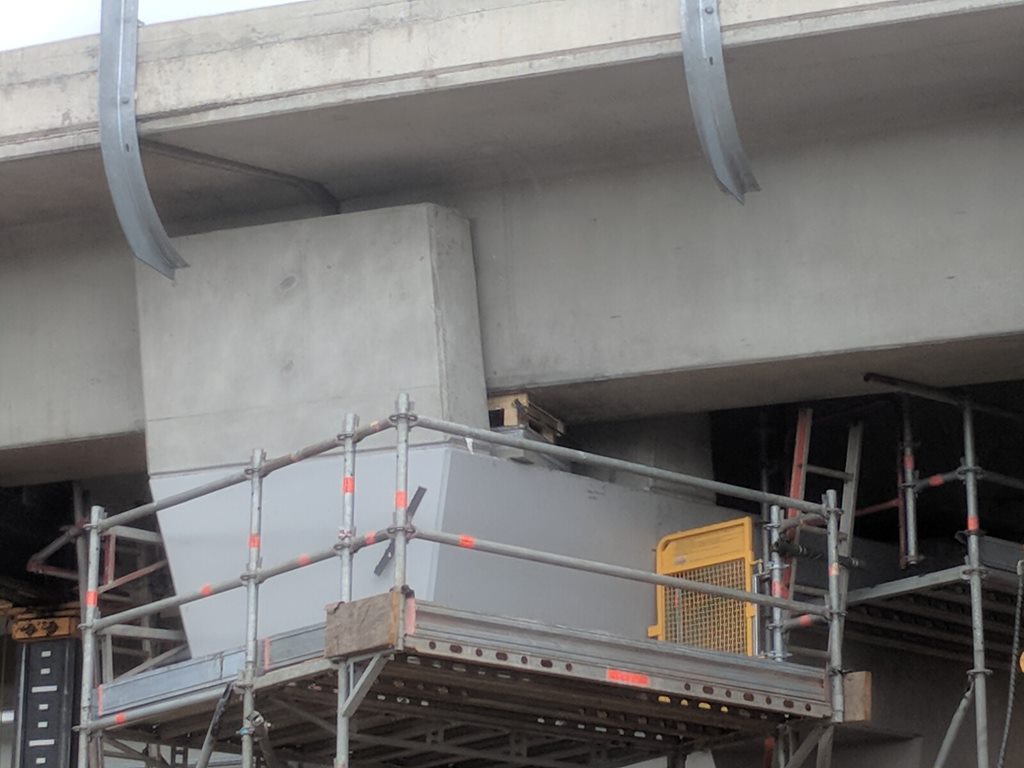