Why would they not be in favour of rail over road? Almost certainly the least disruptive on the balance of things.

there was a small drilling rig at the south eastern corner of this intersection just off Brighton road this morning. I can only assume they're taking samples.
Top

ChillyPhilly wrote: ↑
Wed Feb 24, 2021 10:02 pm
Why would they not be in favour of rail over road? Almost certainly the least disruptive on the balance of things.

ChillyPhilly wrote: ↑
Wed Feb 24, 2021 10:02 pm
Why would they not be in favour of rail over road? Almost certainly the least disruptive on the balance of things.

Yikes.
Our state, our city, our future.

From today at Hove level crossing on Brighton Road; 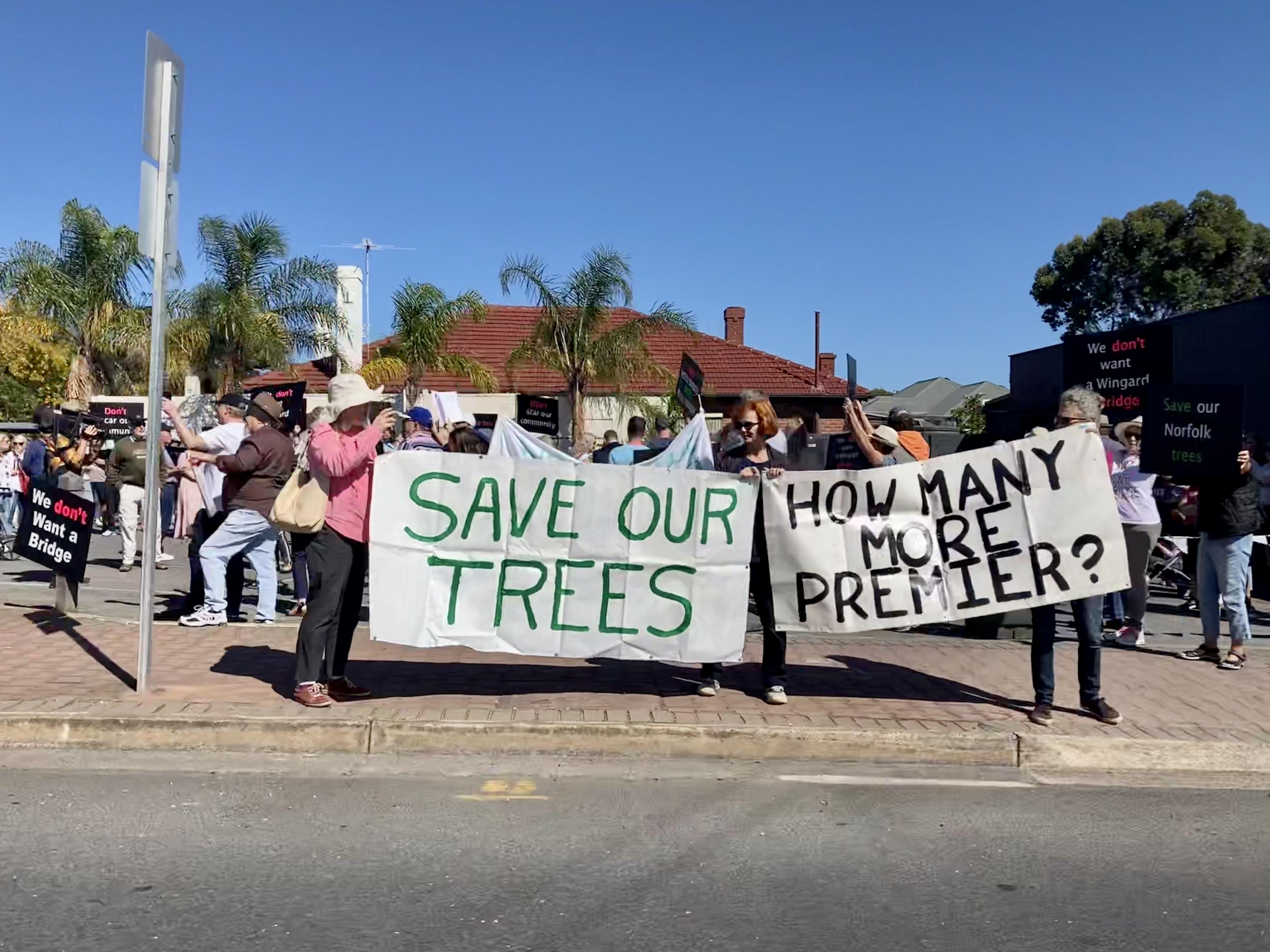 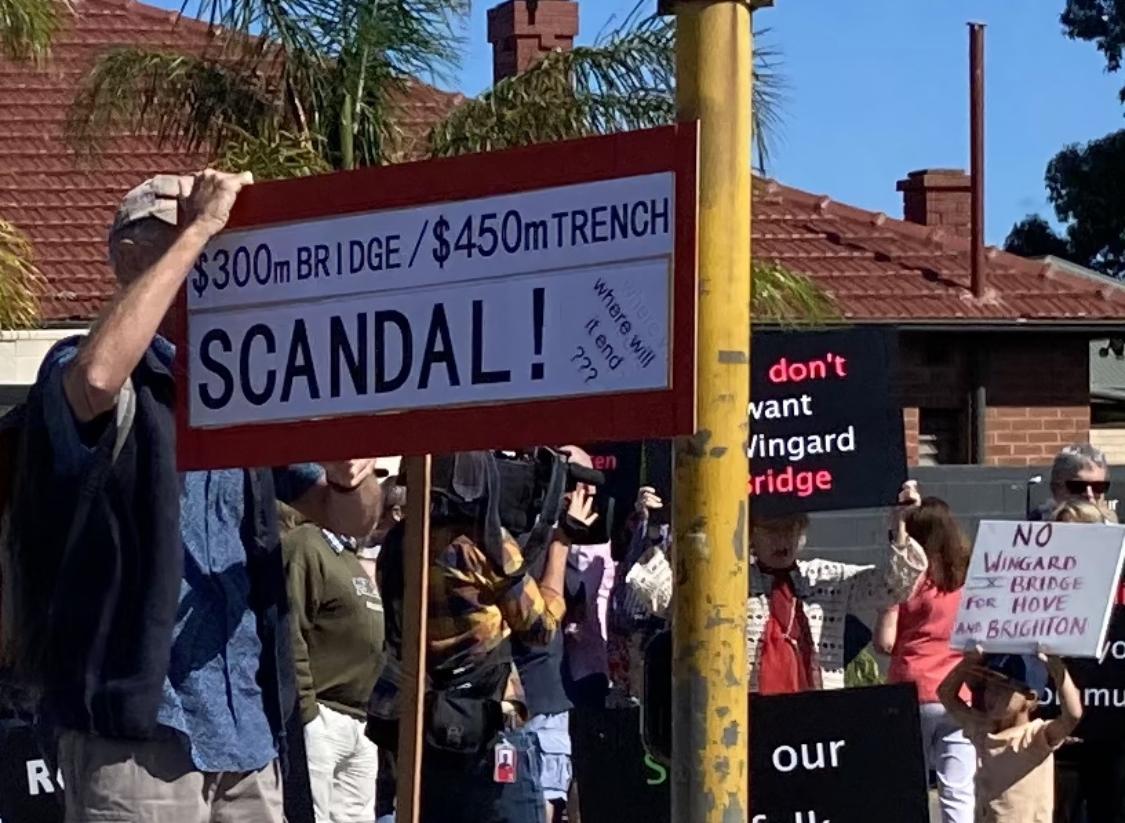 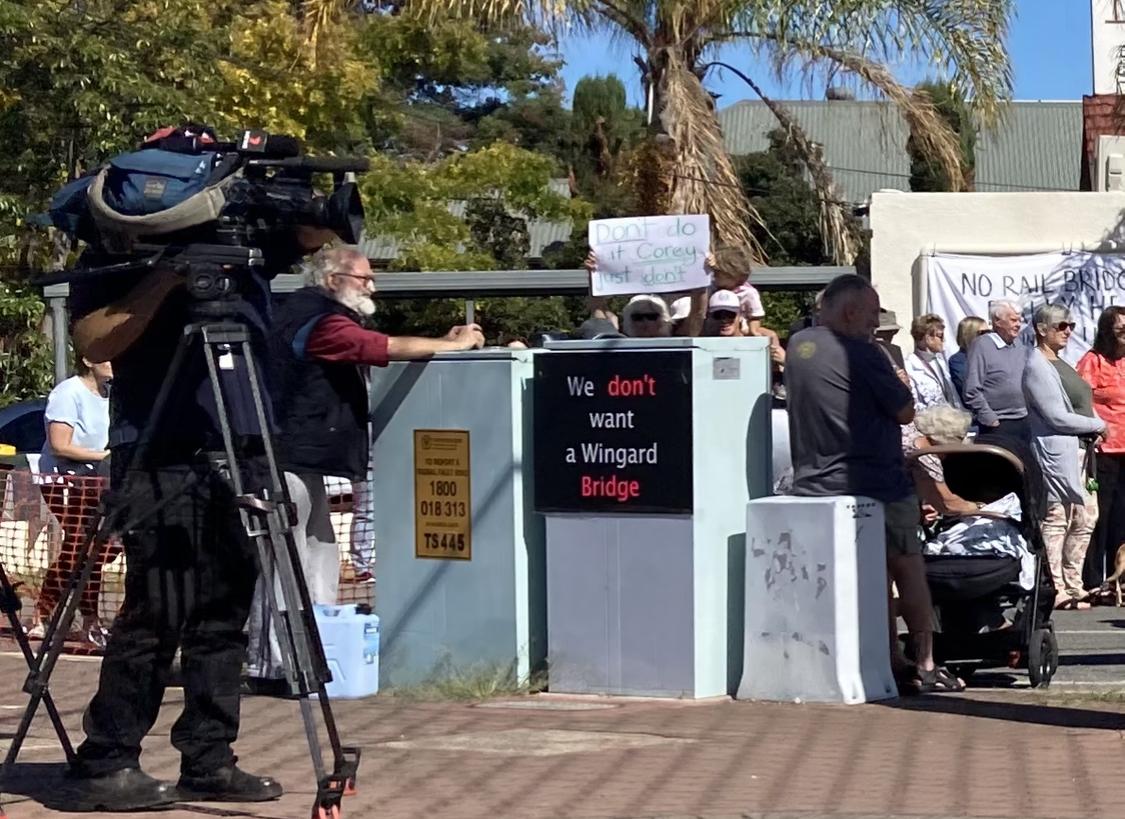 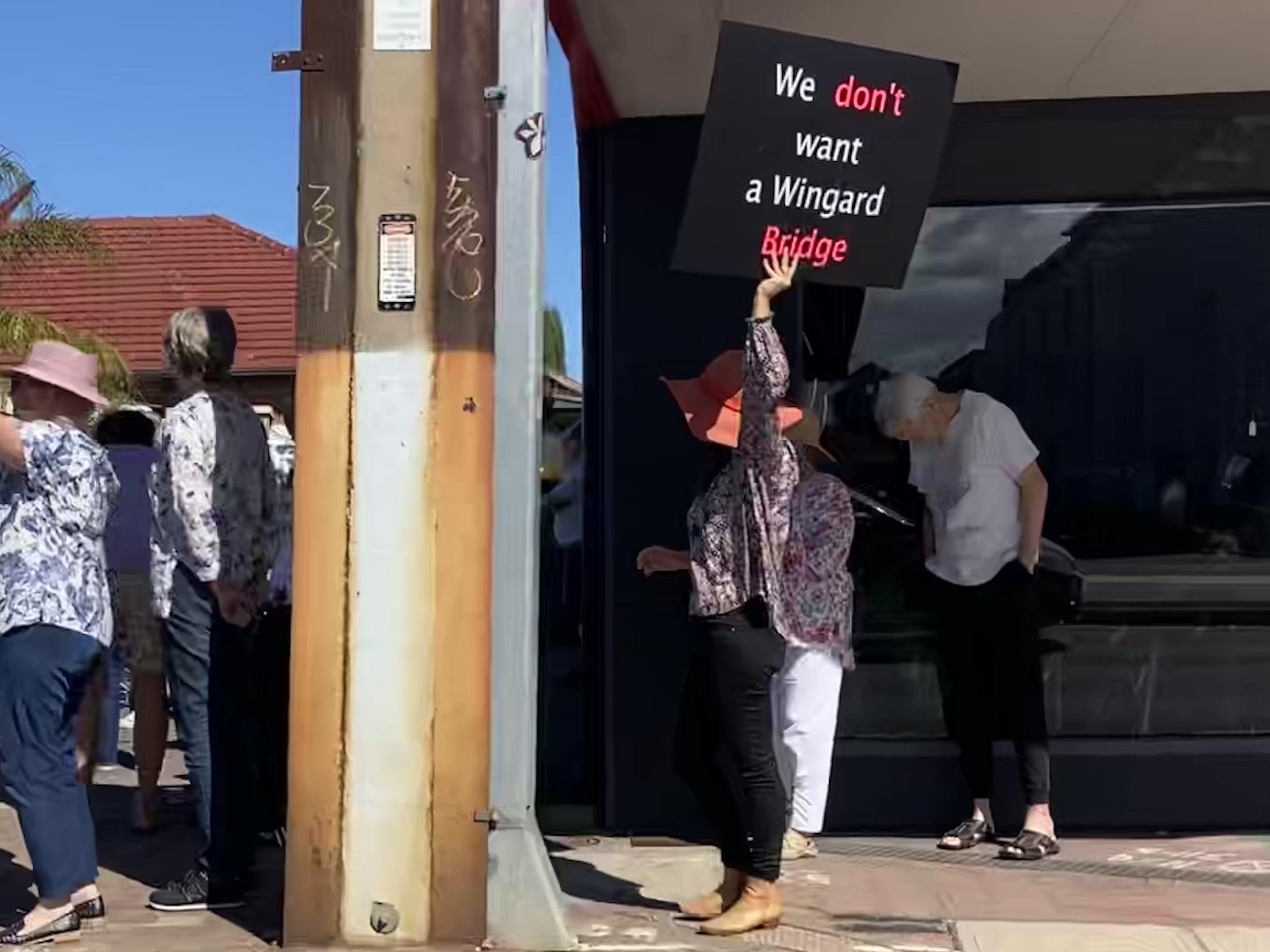 Some of the signs please give me a spell….. scandal bridge? Ship off protestors move aside for progress to happen. Next thing they will be doing is gluing themselves to Brighton road….. ship off
Top

They don't want a rail bridge because their homes will have to be demolished. Instead they want the rail line sunk under the road.
What, there wont need to be any property acquisitions for that?
Would there be that much of a difference in cost?
Top

They are arguing against homes being demolished, but I suspect they aren't the ones with homes under threat, but those who think their home values will go down with a bridge

Rail over road really is the best option here. But it should really be extended to remove the Jetty Road and Edwards Street level crossings and a new Brighton station built (about 150m north of the current station, the rail corridor is much wider there) Remove Warradale station and build Hove about 200m East of the current station so it's not on a curve. The "sky rail" would be about 2.3km long. Oaklands to the new Hove station would be 1.5km and Hove to Brighton 1.4km.
Top

rev wrote:They don't want a rail bridge because their homes will have to be demolished. Instead they want the rail line sunk under the road.
What, there wont need to be any property acquisitions for that?
Would there be that much of a difference in cost?

My understanding is that the protestors either want:

A new concrete railway bridge over Brighton Road would be an eyesore and divide the community, the local mayor says, as residents rallied in protest over the development.
Crowds gathered at the Hove Railway Station crossing on Sunday, opposing a plan to build a $300m rail-over bridge on Brighton Road. They urged the State Government to support a rail-under option.
At the protest, Holdfast Bay Mayor Amanda Wilson said the 1.5km bridge would “dissect” Brighton, “destroy homes” and the community.
“It will be an eyesore for our community, it will divide our community, and we’re concerned it will devalue one of the most premier beautiful beachside suburbs in Australia by having this monstrosity through it.”
She encouraged residents to write to Transport Minister Corey Wingard to oppose the bridge option.
It was revealed earlier this year that sixteen residents who live in single-storey Housing SA unitsnext to the Seaford line received a relocation letter in January.
An emotional Lyn Townsend, speaking through tears, said she received a letter from the State Government in December to say her rental home would be compulsorily acquired in the project. She’s lived in the area for 40 years.
“It said you’ve got until the end of May, maybe June at the very latest to vacate the premises and to leave,” Ms Townsend said.
“I don’t drive. everything that I require is here, within walking distance, all my friends, all my family, my children grew up here. I don’t want to move.”
Costings reveal a rail-under option would cost $450m, while the bridge would cost $300m.
Labor infrastructure and transport spokesman Tom Koutsantonis attended the protest and said the costings for the project were baseless
“I find it very hard to believe that rail-under would cost over $400m,” Mr Koutsantonis.
He said he would ask the Commonwealth Parliamentary Budget Office to find out “what these numbers are”.
Leading the protest, Hove resident and Brighton business owner Jane Fleming said residents want the government to better investigate a rail-under option.
“Why can’t their engineers come up with a solution to go under, no temporary train line, and run buses from Brighton to Oaklands for the time of the build,” Ms Fleming said.
“Let us know how many homes are going to be acquired. We don’t want to lose homes in our community, we don’t want to lose our Norfolk pines that line Addison Road, it’s a signature of the city of Holdfast Bay.”
Mr Wingard said no decision for the project has been made yet but the department had concluded a round of community consultation.
He said five homes would be acquired in the bridge-over option, while 46 homes would be acquired in the bridge-`under option.
“I welcome the council’s endorsement of this project. Given they’ve thrown their support behind the most expensive option, and the option that takes away dozens more properties and has the greatest disruption to services, I would expect that council makes up the shortfall financially for that option should we go down that path.”

rev wrote:They don't want a rail bridge because their homes will have to be demolished. Instead they want the rail line sunk under the road.
What, there wont need to be any property acquisitions for that?
Would there be that much of a difference in cost?

My understanding is that the protestors either want:

Rail bridge over the road, rail under the road..what are the other options?

I find it interesting they claim it will be an eyesore. Maybe it will in time or maybe it wont, but what's already there is already an eyesore.

The Holdfast mayor once again showing why councils should be abolished.
Top

ginzahikari wrote:Has anyone seen these proposed designs yet? The other options are in the project website.

Thanks for sharing this. I’ve reshared within a couple of the community groups that I’m part of in Marino, Brighton and Seacliff. 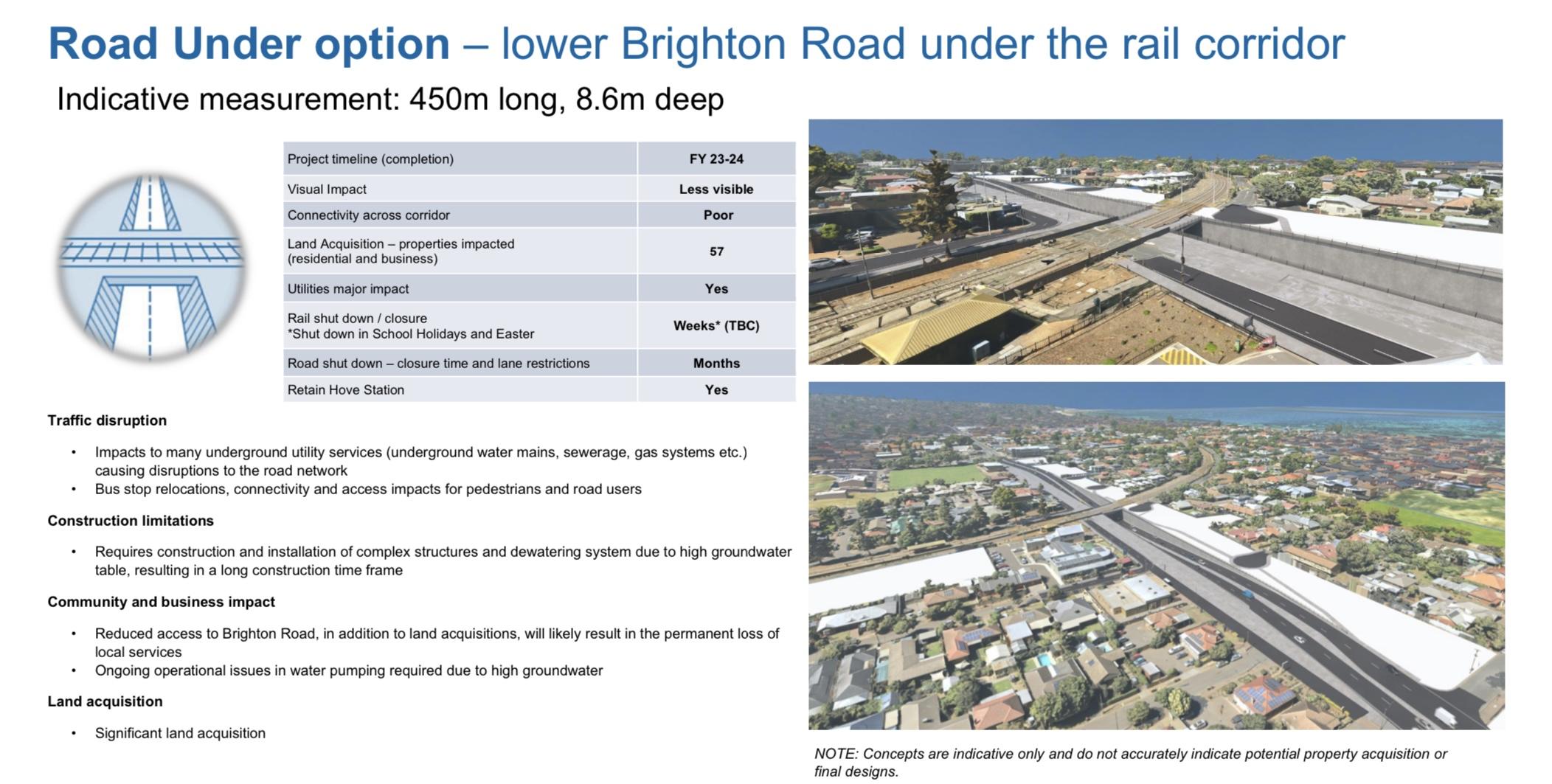 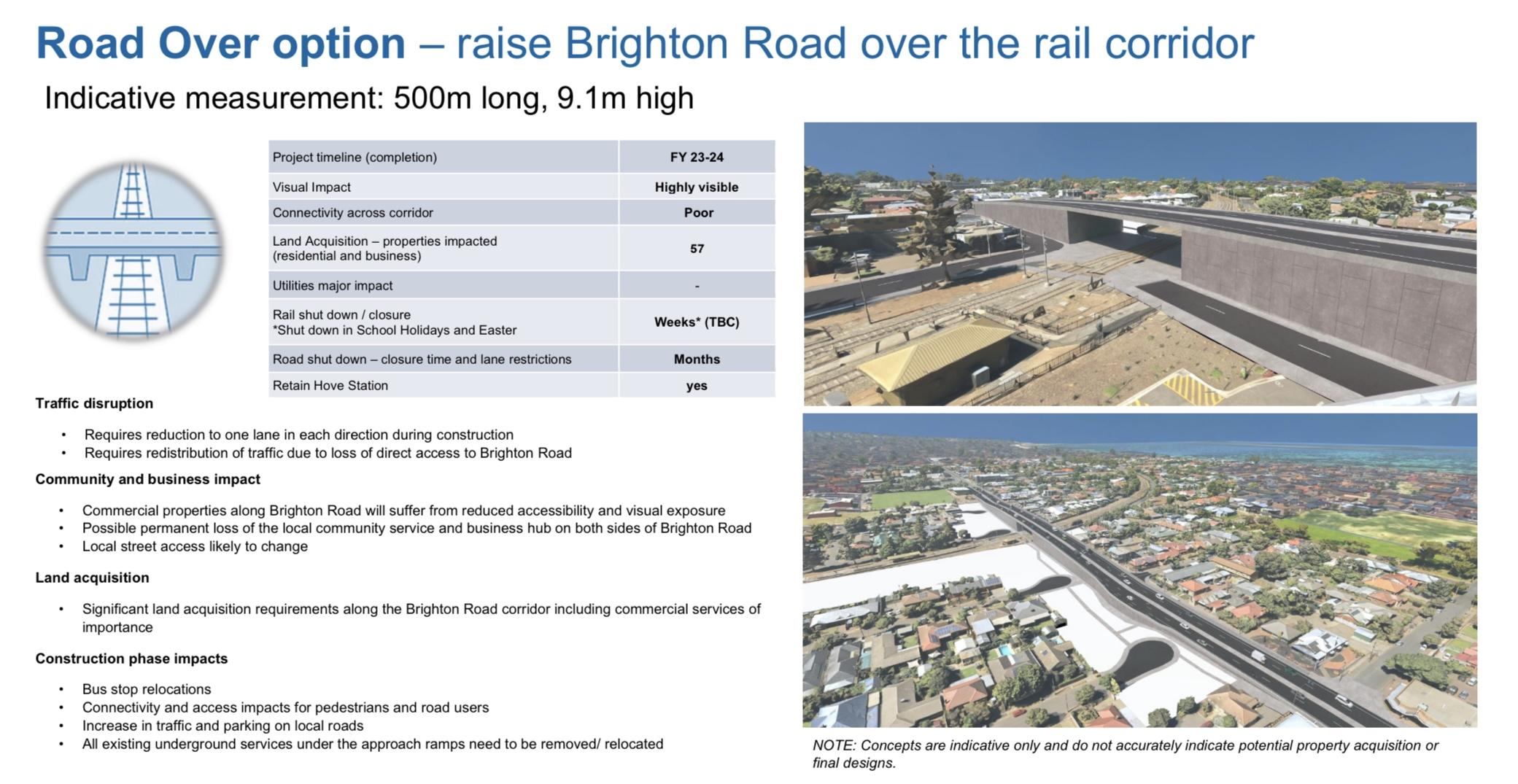 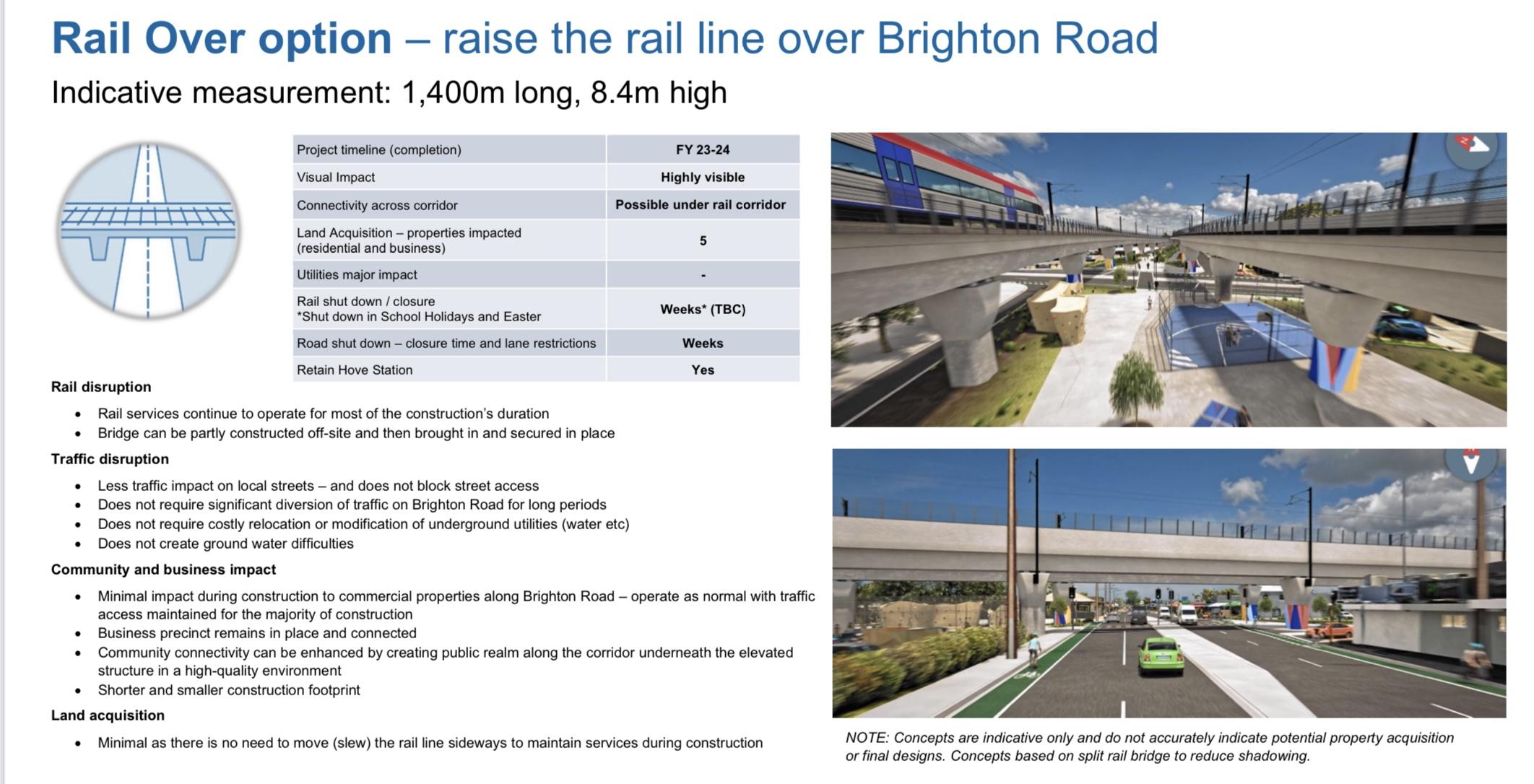 Don’t fancy this road bridge option too much!

Sent from my iPhone using Tapatalk

These are the 4 options Rev. Totally agree that what’s there right now is not great......something needs to happen here.

I think the preferred option is the rail under but at a whopping $450m (with property resumptions) it seems v. expensive. Even the $300m road bridge is almost double the original $171m budget. Wonder if being in a tight political seat will influence the outcome? “With a margin of 1.3 percent, Boothby is the most marginal seat in South Australia, and one of the most marginal metropolitan Coalition seats in Australia.” Wiki.
Top
Post Reply
135 posts