During the months of July and August I spent 3 weeks travelling around Japan, and destination number 1 was Tokyo, a city I had always wanted to visit but never quite got there until this year.
Lets get down to some basic facts, Tokyo is the largest city on earth (by population) containing a whopping 35 million inhabitants and stretching over 13,780 square kilometres (source :Wikipedia http://en.wikipedia.org/wiki/National_C ... on_(Japan)) meaning it stretches over 100 kilometres by 100 kilometres. This I can definitely confirm from personal experience, Narita Airport (main international gateway to Japan) is about 75 kilometres from Tokyo station ( the Tokyo suburban sprawl starts about 10 km from the airport) and then the city sprawls another 80 kilometres from Tokyo station towards Mt Fuji. E-n-o-r-m-o-u-s!

So why talk about somewhere like Tokyo in this forum? Because Tokyo has relevance to every other city on the planet. There will be soon many other mega cities like Tokyo (mostly in the 3rd world though) and so Tokyo and its mechanisms to deal with a large population are important to the rest of us.
So what is Tokyo like? Does it sprawl or is it dense.....well it is both.
The 100 square kilometres of central Tokyo is all high rise buildings, ranging from 5 to 80 storeys, in fact the "average" building in the Tokyo metro area is probably a 5 storey structure (as opposed to Adelaide where the "average" building is a 3 bedroom semi-detached house) Yes there is "suburbia" (semi-detached houses) in Tokyo but that is a long,long way from the centre.
Unfortunately modern Tokyo was basically re-built after WW2 so it is full of uninspiring 50s and 60's architecture....then the richer areas got makeovers in the 80's and up to the present day.

The Shibuya pedestrian crossing, reportedly the busiest in the world.

There's actually very little 50/60s architecture around. Most buildings (including houses) have a very limited life span and are regularly torn down and replaced. And you'd be surprised at how close in you can find semi detached dwellings (even in the back streets of the major areas). That said, those are much more compact than what we're familiar with.

Looking forward to hear more of your impressions though as a first time visitor.
Top

Here's an interesting titbit for you - despite its high density and large population (8 mill for Tokyo and 36 for the greater metropolitan area) train companies in Tokyo still make a loss from fare sales and rely heavily on other sources of revenue. Always an interesting fact to throw in the ring when someone is making the 'Adelaide is not dense enough for decent public transport' argument

Tokyo is a multi-centred city...the geographic centre of the city is the Imperial Place, but business/shopping etc is centred around 3 big train stations : Tokyo, Shinjuku and Shibuya. In fact most development in Tokyo seems to centre on or connect to train lines. This is a city where public transport rules and cars come a distant second.
Does the average Tokyoite have a car? I didn't research this but my guess is no....central Tokyo has less traffic than Sydney (and way less aggressive drivers) I hardly saw any multi-storey car parks in central Tokyo. People train it instead.....
Is public transport good in Tokyo?......yes, yes, yes
Lets start at Narita Airport...there is a choice of 4 (yes four)different train services into central Tokyo...
I caught the NEX train to Shinjuku in the centre of Tokyo (new train, reserved seats, food and beverage service, more like 1st class plane seats) So far so good..at the airport I bought a Tokyo smart transport card called Suica, time to use it. 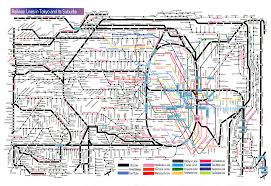 Fortunately this is not the standard map to read to travel around Tokyo......Tokyo basically has too many train stations to put on one map so each company had their own network map.

So I start doing the tourist thing visiting different parts of the city but I never buy a train ticket because my Suica card is accepted on every form of public transport in Tokyo (so what you say) but later I go to Kyoto and Osaka, I can use my Suica card there, and on the trains in Sapporo.....and on any JR train (except the bullet trains) in the country, anywhere in Japan...now that's a "smart" card!
Only downside is every time you transfer you pay another fare, even if it is with the same company. Fortunately Tokyo has so many train lines that I mostly could get to tourist destinations with just one trip.
Trains in Tokyo are....clean, frequent, modern, safe... but stop at midnight! Yep the worlds largest city doesn't have public transport after midnight!..no night buses...nothing. Bizarre! There would enough patronage for some of the subway and JR lines to run 24/7.
(I am thinking of the Yamanote line especially..that should never ever stop)

This photo was taken pre rush hour ( about 2-30pm). My travel book said that rush hour lasts from 4-7pm...they lied!!..rush hour lasts from 3-9pm.....Fortunately I am 1.8 metres tall and a little on the stocky side so I never found the crush confronting, I could always reach the hanging bar to grip onto.....I was on the lookout for the "pushers" who shove commuters onto already crowded trains, but they don't seem to do that anymore.
And in Osaka I saw "women only" carriages...

Shopping street in the Shibuya area

To be continued
Top

obituary resider wrote:Here's an interesting titbit for you - despite its high density and large population (8 mill for Tokyo and 36 for the greater metropolitan area) train companies in Tokyo still make a loss from fare sales and rely heavily on other sources of revenue. Always an interesting fact to throw in the ring when someone is making the 'Adelaide is not dense enough for decent public transport' argument

That's true. JR and the other private railways and subways make the bulk of their money from real estate - stations are surrounded by retail (and larger ones come with multiple department stores, sometimes multiple of the SAME department store).
Last edited by Nathan on Wed Sep 24, 2014 11:06 pm, edited 1 time in total.
Top

PeFe wrote:Does the average Tokyoite have a car? I didn't research this but my guess is no....central Tokyo has less traffic than Sydney (and way less aggressive drivers) I hardly saw any multi-storey car parks in central Tokyo. People train it instead.....

In Tokyo, no. It's largely unnecessary. Even for those with mobility issues, it's easy enough to catch the local collector bus to take you to the nearest station.
Top

So what is Tokyo like on a "social" level? Well of course this question means "what are the Japanese like as a people?"
I have never met such polite and law-abiding people as the Japanese......Tokyo may be the worlds largest city but it exudes a sense of calm and order ..because the people are so calm and ordered (must be the Zen-Buddhism thing)
First day in Tokyo I am standing at a set of traffic lights (with a "don't walk" sign) and no traffic coming the other way...20 Tokyo locals stood there and waited (and waited) for the pedestrian lights to go green before they walked......subservient you say, partly right, also partly because of the Japanese sense of co-operative living I would say. Tokyo has been a mega city for the last 100 years and Japan has been an urbanized society for that period as well...add that to the fact there is limited living space on the main Japanese island so "culturally" you have to learn to get along in an highly populated environment (and maybe even never "rock the boat")

Shopping/café/night life street next to the Shinjuku train station

So the average Tokyoite finishes work at 6pm, so what do they do?
Well they do a few different things....some people head straight home, so yes the subway/commuter trains are jam packed...but quite a few Japanese salary men do the "few beers and a bowl of cheap noodles" thing whilst the women (yes I know its a cliché but on surface level it was true) go shopping and maybe afterwards have a cheap meal. And Tokyo has "Asian" shopping hours - stores open at 10 or 11am and close at 9 or 10 pm, so you can go shopping at lunch time or after work..Adelaide please copy this and end the 6pm cemetery that is city streets.. So on a Monday night in Tokyo it was "slightly" buzzing...and safe....I quite happily walked the streets drunk...I saw virtually no evidence of low level crime in Tokyo (or Japan)
I have never felt so safe in any country on this planet as Japan. When Japanese men get drunk they get loud and boisterous but harmless, when Anglo-Saxon men get drunk they get aggressive.. I met an Australian bar owner in Osaka who told me that I could easily walk up to any Japanese man in the street and punch him in the face, and he would have no idea what to do because "random violence" doesn't happen in Japan and therefore people don't need to consider their responses (even if it only in your head "what would I do?")

Tokyo at night is an amazing sensory experience, millions of neon light come on giving it a totally different feel to the day time

and to finally sign off this evening I must thank all the Japanese people who helped me as a tourist...I speak a few words of Japanese and I relied on finding people who spoke some English to guide me through the country.
Arigato Tokyo Arigato Nipon
Top

some basic info on railways in Tokyo
Top

I love their drinking culture. Something I found fascinating when I was there was that youths getting drunk in the streets bring plastic bags to vomit into so they don't leave a mess

I believe they stop the trains at midnight so that track maintenance can be carried out, and to not stress the tracks and trains too much.
Top
Post Reply
10 posts • Page 1 of 1