The Victorian Government has confirmed the preferred alignment and station precinct locations for the Suburban Rail Loop – a 90km rail ring around Melbourne’s middle suburbs.

The project will connect every metropolitan train line from Cheltenham to Werribee, create a rail link to the airport and build three transport super hubs at Clayton, Broadmeadows and Sunshine to connect regional passengers to the Suburban Rail Loop. 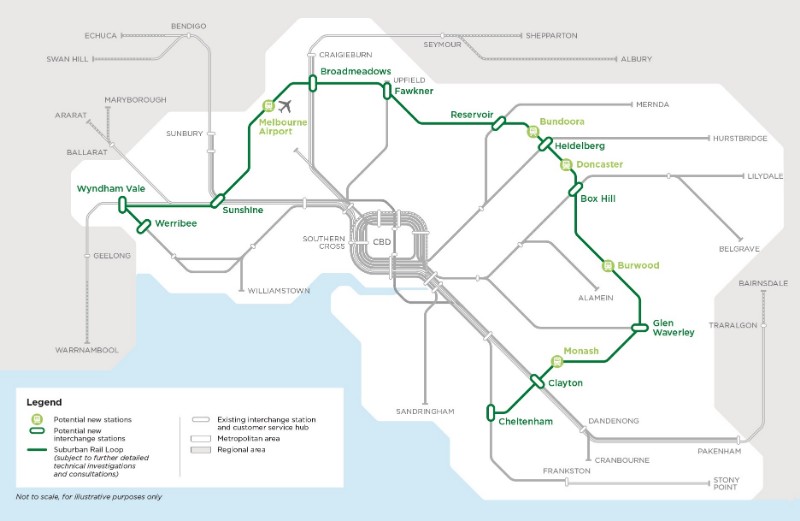 The government also confirm a dedicated new authority to deliver it.

The design and delivery of the project will be led by the Suburban Rail Loop Authority. The new Authority will start its work early September and be headed by incoming Chief Executive, Nick Foa, who has extensive experience in infrastructure, planning and government administration.

Mr Foa and his team will immediately begin consultation with local government, universities and other key institutions and stakeholders on options for where stations will be located in the precincts.

This consultation, along with the geotechnical work already underway, will inform the development of the Business Case. A Registration of Interest process for local and global firms has also begun to establish the best team to build the project from 2022.

“The Suburban Rail Loop will better connect Victorians to jobs, education and each other. We promised to get on with it, and that’s exactly what we’re doing.”

“The Suburban Rail Loop is the next step in the future of our transport network.”

Chief Executive of Suburban Rail Loop Authority, Nick Foa, said, “I’m excited to work on this once in a generation project, which will create stronger connections between suburban Melbourne, create more open spaces and provide new opportunities for business in the suburbs.”

I wonder if successive governments will pass this through and get it done or if it will be done in a piecemeal approach. I guess it will depend on how well the business case will stack up.
Top

This is the one projected to cost $50 billion yeh? I'd say this is like the new Sydney airport. Too important for either side of politics to stuff around.
Then again, they did cancel a freeway project with huge cost to the tax payer, and in the end I think for something like another lazy billion (billions already spent) they could have had the completed freeway.

Melbourne Airport is going to be a busy place for a few years with construction work. The rail link to the CBD, this suburban rail link, and a new hotel for Terminal 4.
Top

Other capital cities are seeing the value of improving their public transport networks to improve access and reduce traffic congestion, and either constructing now or planning new lines for the future. Examples:

But what is DPTI doing here in Adelaide? Enhancing bus routes? What a load of rubbish. Why can’t we properly for the long term like other cities?

After Gawler line is electrified, the key thing we need is a CBD rail tunnel. This is the component which will revolutionise public transport in Adelaide, particularly in the northern, southern and north-western suburbs.
Top

Well there is a plan for AdeLINK, it's just dead under this government.
Keep Adelaide Weird
Top

AdeLINK wasn’t a plan (yet). It was a vision. Has there actually been any design/planning work done on it in the past 5 years since it was announced? There was some feasibility study done on the PortLINK line ... that’s all I’m aware of.
Top

AdeLINK wasn’t a plan (yet). It was a vision. Has there actually been any design/planning work done on it in the past 5 years since it was announced? There was some feasibility study done on the PortLINK line ... that’s all I’m aware of.

I'd argue Coast to Coast was a vision, but AdeLINK was a plan. It may have lacked a business plan, but was part of the ITULP (2015) and subject to the Multi-Criteria Analysis (2016) with EastLINK and ProspectLINK on verge of being progressed to design in 2018. It remains on Infrastructure Australia's priority list. The MCA stated that detailed modelling was scheduled for 2017, but I'm unsure if this occurred.
Keep Adelaide Weird
Top
Post Reply
7 posts • Page 1 of 1