All high-rise, low-rise and street developments in areas other than the CBD and North Adelaide. Includes Port Adelaide and Glenelg.
Post Reply
23 posts
Message
Author

There should be some new information early next week regarding the Hindmarsh Stadium upgrade. They will release it first to Adelaide United members at their Members Forum on 5 July.
Top

Is this the $45 million upgrade already announced for new big screens, pitch, change room upgrades and other minor improvements?
Top

Yes. I wasn't able to attend the member's forum, does anyone know if further details were revealed on the night?
Top

Yes. I wasn't able to attend the member's forum, does anyone know if further details were revealed on the night?

upgrade include a roof to be built over the eastern grandstand, two new super video screens installed, improved corporate and media facilities, overhauled change rooms, upgraded lighting, a full replacement of the pitch, while disability access has also been promised.

The state government planned for these upgrades to be complete by the start of 2023 at the latest – in time to host Women’s World Cup fixtures.

Hindmarsh is commonly referred to as one of the best purpose-built football stadiums in the country, with the fans on top of the action. It appears its capacity of 16,500 won’t be increased as part of the upgrade.

There had been talk recently that Adelaide’s games during the 2023 FIFA Women’s World Cup may be moved to the Adelaide Oval, however this upgrade will lock in Hindmarsh Stadium, as it did during the Sydney 2000 Olympics when it hosted matches. Like it did then, its capacity will be boosted to around 18,500 with the use of temporary grandstands.

The member's Forum was moved to next Tuesday, 20 July. We should have the details then.
Top

A bit disapointed, previous renders had made it look to me like the new Eastern stand would be higher and match the height of the Western stand, but looks like the new stand will be a bit lower. It's just the current stand with some corporate facilities up the top and a roof. Shame because there looks to be room for an extra tier to match the Western side too.

Be good if they would put together a masterplan for longer term upgrades. Do they ever see an option to increase capacity at Hindmarsh?

I'd hoped if they were to do a new Eastern stand matching the Western one, that eventually they might wrap a bigger stand right around the north end of the ground. Even if they needed to remove the Southern stand and move the pitch 10m south to make room for a bigger stand around the North.
Top

Some of the renders from the DA: 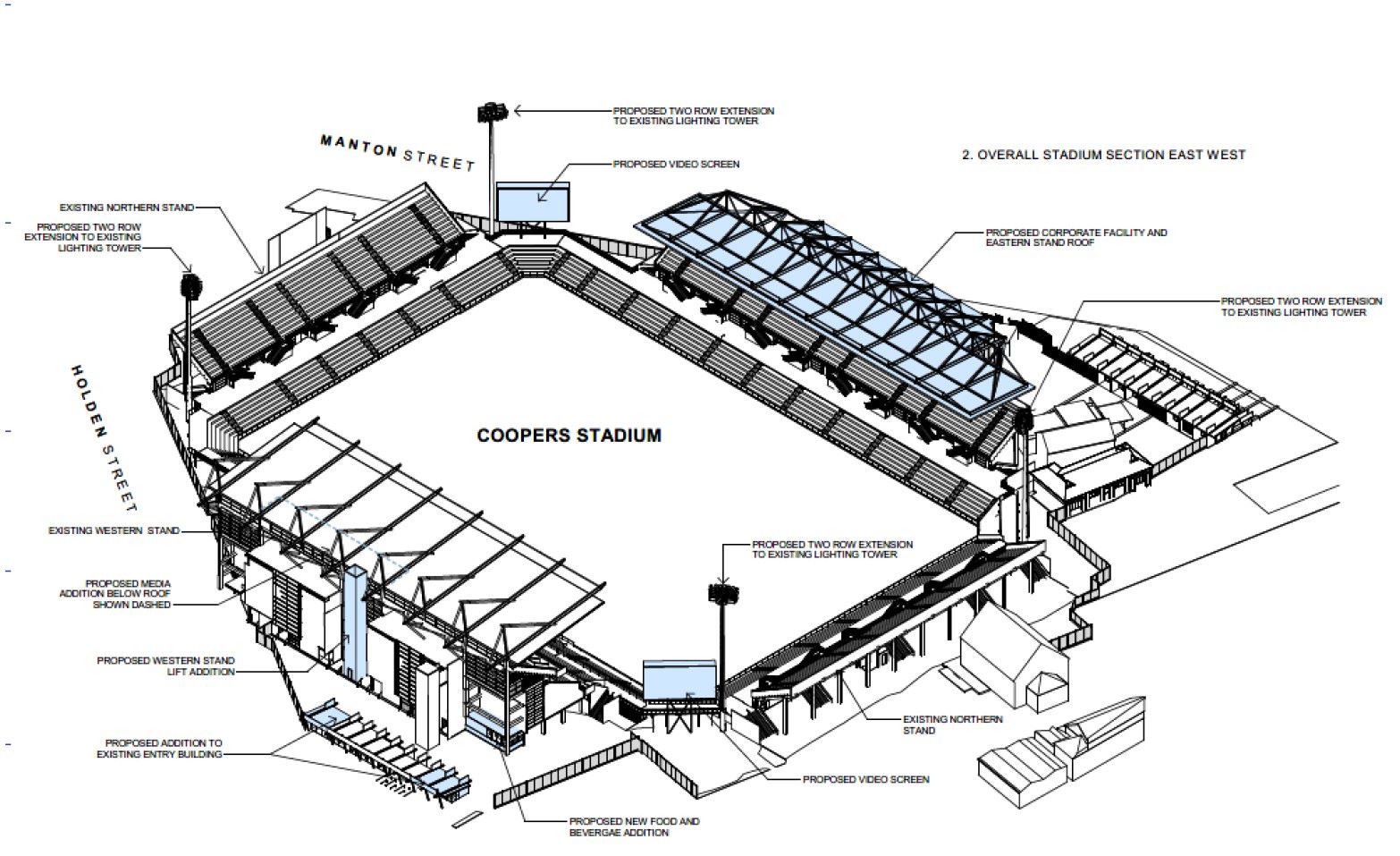 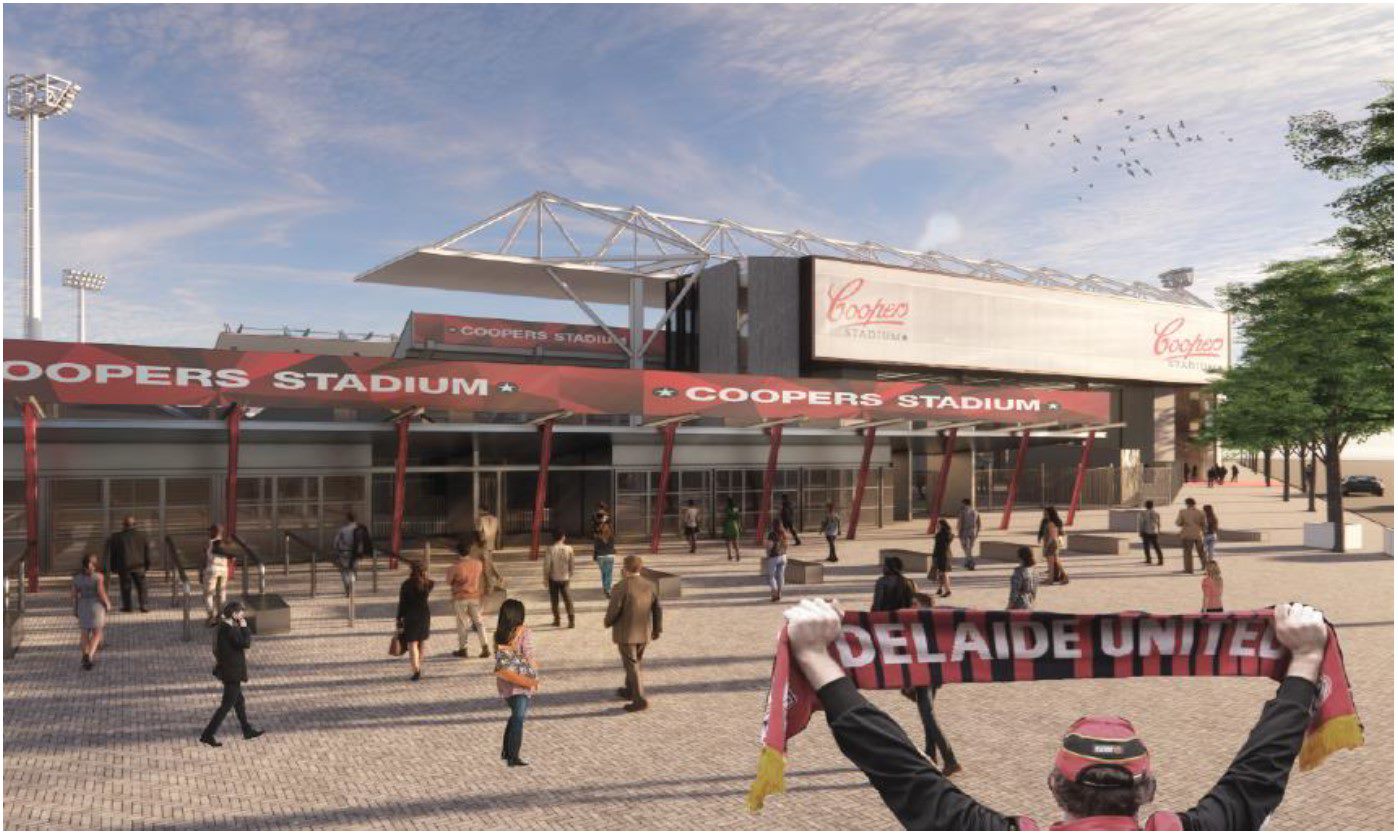 I was expecting the same as Matt, a higher stand and some extra seating to bring the Eastern stand in line with the Western stand. This upgrade serves mostly those who want more corporate facilities, it doesn't bring much for the fans except the new screens and new PA system.

A few other people have also mentioned that the rain comes in from the West, so the new shelter won't bring much protection if it's a windy and wet night.
Top

Another half-arsed development from the Marshall Government. What a surprise

Interesting that they are pushing for shelter of both the northern and southern stands at a later time. This will give the atmosphere a boost. Ground looks fantastic in the render.
Top

what a waste of $$$$
I Follow The Port Adelaide Football Club
https://www.facebook.com/IFollowThePAFC/
Top

How is it a waste of money? Hindmarsh had been crying out for an upgrade for years. This upgrade will bring it closer to the 21st century.
Top

$53 million and it is getting no increase to the capacity.
I Follow The Port Adelaide Football Club
https://www.facebook.com/IFollowThePAFC/
Top

Users browsing this forum: No registered users and 9 guests